They've been in power 10 years and wages haven't gone up one bit. 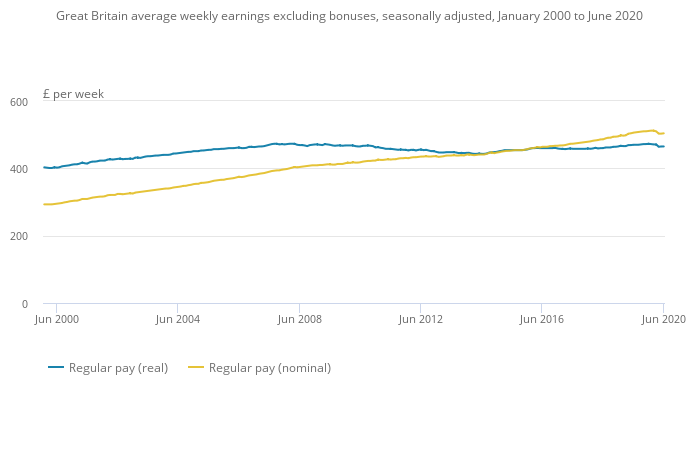 In real terms, the average person is paid no more now than they were when Labour left government in May 2010, new figures reveal.

Data from the Office of National Statistics (ONS) shows that weekly earnings rose by 15% throughout the 2000’s when Labour were in power but then started to fall in 2010, when they were replaced by the Tories.

They began to increase slowly again around 2014 but these small gains were wiped off by the coronavirus crisis, meaning the average weekly earnings in 2020 are the same as in 2010.

“Pay in real terms is still below its level before the 2008 economic downturn”, the ONS said today. ‘Real terms’ means that it is adjusted for inflation.

In 2016, the Institute for Fiscal Studies warned this would happen. Commenting then, their director Paul Johnson said:

“This has, for sure, been the worst decade for living standards certainly since the last war and probably since the 1920s.

We have seen no increase in average incomes so far and it does not look like we are going to get much of an increase over the next four or five years either.”

“Half of the wage growth projected for the next five years back in March is not now projected to happen. On these projections real wages will, remarkably, still be below their 2008 levels in 2021.”

“One cannot stress enough how dreadful that is – more than a decade without real earnings growth. We have certainly not seen a period remotely like it in the last 70 years.”