XR plan a series of regional events over the bank holiday weekend. 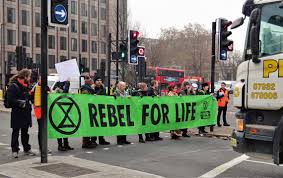 XR have announced a series of actions today throughout the UK. From an ‘elephant in the room’ roadblock in Bristol to a boat called Lightship Greta sailing from Brighton to London, to a feed-in of nursing mothers and older children the actions will be planned on a regional basis.

Extinction Rebellion groups are autonomous and take non-violent actions to raise attention to the climate crisis. This year they are dedicating each day from Friday 28th to Monday 31st August to different themes.

Friday 28th Will see regionally planned events and banner drops protesting fossil fuels. Saturday 29th will focus on aviation and its impact on the UK’s carbon footprint. Sunday 30th will be a day focussed on community building while Monday 31st is billed as “permanent bank holiday” looking at issues around banks and finance.

Poppy Silk, a Bristol University student and member of Extinction Rebellion Youth, said: “During the pandemic, the government has proved that they are unable to keep us safe in the face of emergency. Now is the time for adults to listen to young people and join the youth in demanding the government address the climate and ecological crisis in a way that addresses the deepening inequality in our society”

Macey Gray, Coordinator at XR Cymru said “We have to send a clear message to the government that the inaction we’ve seen on the climate, ecological and humanitarian crisis so far is not good enough. They’re supposed to serve the people but none of their decisions post covid so far reflect that. They have a huge opportunity here to turn things around.”

The actions over the bank holiday weekend will be precursors to further action planned by the national XR group for 1st September in London, Manchester and Cardiff, timed to coincide with the resumption of Parliament. The group also have actions planned internationally. They will be gathering in Parliament Square to protest government inaction on climate change. They are also running a digital campaign for those who can’t get to a protest or are unable to gather due to coronavirus.

Clare Fuller – media coordinator for Extinction Rebellion – called Climate change “The biggest crime being perpetrated on humanity and “that humanity itself was at grave risk.”

A full list of the regional rebellion events can be found here.