The UK hasn't provided aid to China since 2011. 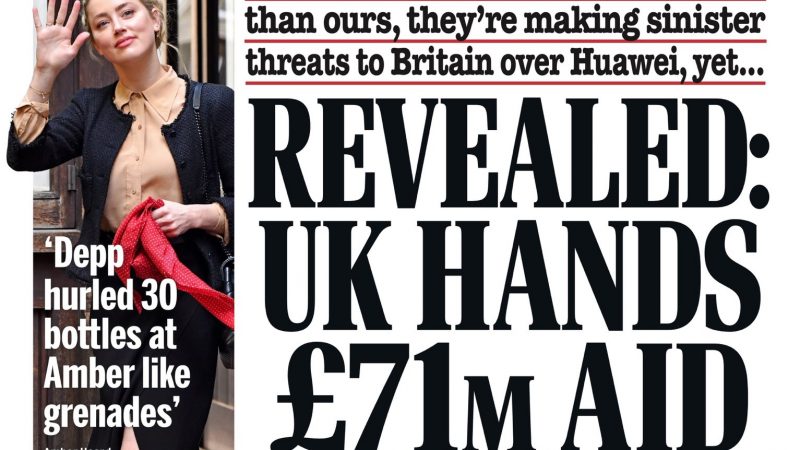 The ‘revelation’ was condemned by Iain Duncan Smith and uncritically repeated on the websites of the Mirror and the Sun.

But is it true? Not really. The money is not spent by the Department for International Development (DFID) and it is not aid in the traditional sense as the UK hopes to benefit from the spending.

The source of the Mail’s claim is the Department for International Development’s annual report. It shows that the UK’s “net bilateral Overseas Development Assistance (ODA)” to China is £55.7m. It also shows the UK’s share of ‘multilateral net ODA by country’ is £16.9m.

The first figure is the UK’s direct spending and the second is the UK’s share of spending by organisations like the UN. The Mail seem to have added these two figures together and then inexplicably rounded them down from £72.538m to £71m.

But what does the figure mean? What is ‘Overseas Development Assistance’? That’s a hotly-debated subject. It’s supposed to basically mean when one country helps another – but what is included in that definition is very controversial. Under what circumstances, does a loan to a poor country count? Does the salary of a British soldier doing humanitarian work ciynt? Does the cost of providing advice on human rights count?

A lot of it is very different from what the general public define as aid – ie giving something to a poor country with no expectation of getting something in return. The UK says it does not provide this kind of aid to China and says it has not done so since 2011.

A clue that this is true is in the report which says that the £55.7m the UK spends in China is not spent by DFID. Around 60% of it is spent by the Department for Business, Energy and Industrial Strategy, 20% is spent by the Foreign Office and the rest is spent by ‘other’. These are departments which only spend money when they want something for the UK in return.

For example, the Daily Mail breaks down about £7m of the £56m spending – although it does not provide a source. It says that about £1m was spent promoting human rights, democracy and the rule of law. That’s not aid – it’s the UK’s stated foreign policy goal.

And another £20,800 was spent helping China tackle its illegal wildlife trade. Given this trade is widely thought to have contributed to coronavirus developing, the only scandal here is that we should have spent much more.

The Daily Mail also claims that the the UK “sent almost £300m in aid to India”. But, as the footnotes to the report explain: “DFID ended its traditional aid programme to India at the end of 2015.” That was because David Cameron caved to campaigning from the Daily Mail. Its ODA now is “high-level advice” and “capital investment” which aims to generate a return to the taxpayer. So it’s not aid, it’s investment.

The Mail goes on to say that £4.65m went to “Communist Cuba”. Again, this was not aid in the traditional sense. Three-quarters of the £4.65m was spent by UK Export Finance whose job is to help UK companies export by insuring them against non-payment – so the beneficiary is a UK company’s shareholders rather than the Cuban state or (god forbid) the Cuban people.

The other quarter was spent by the Foreign and Commonwealth Office. They run projects in Cuba promoting the UK by teaching English and by paying for Cuban students to study in the UK through Chevening scholarships. The goal of these programmes is to promote UK foreign policy although some Cubans do get an education as a by-product.

The Daily Mail has a long-running agenda against overseas aid. Their normal tactic is to spin the truth so that sensible DFID projects sound ridiculous. For example, a female empowerment campaign in Ethiopia was accused of ‘giving money to the Ethiopian Spice Girls’ and a climate change awareness programme in Kenya was described as ‘listening to toads’.

This latest tactic is to imply that non-DFID projects are DFID aid projects and use that to attack and devalue DFID. The irony is that they’re able to do this because they and the Tory Right have so diluted the meaning of what aid is. As Dr Wanda Wyporska and Oxfam’s Toni Pearce have written for Left Foot Forward, aid spending increasingly benefits private corporations and has lost its focus on helping the poorest.

This trend is sure to get worse when DFID is scrapped and subsumed into the Foreign and Commonwealth Office. Boris Johnson has suggested that aid should be switched from Africa to Eastern Europe so that it is more in line with the UK’s foreign policy goals to limit Russian expansion. The goal of helping the world’s poorest would then be sidelined.

The scrapping of DFID was criticised by many charities as well as David Cameron and former Tory DFID minister Andrew Mitchell. On the other hand, it was supported by the secretively-funded Taxpayers Alliance who took credit for persuading the government to do it.