They published articles by an author who seems not to actually exist. 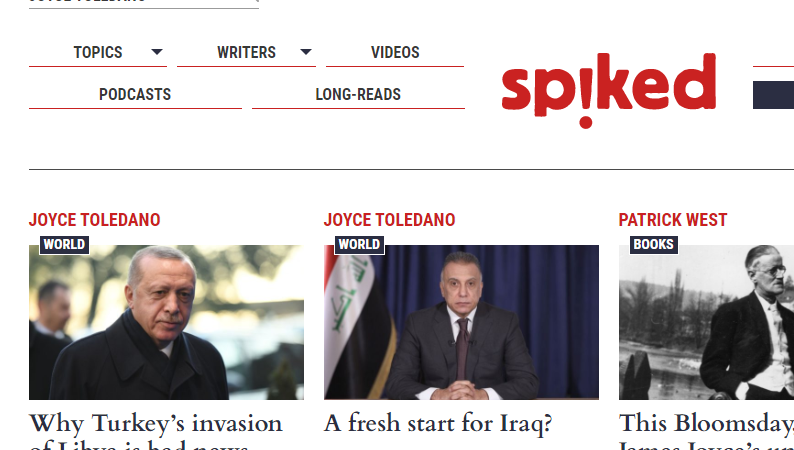 Spiked has published articles ‘authored’ by someone who reportedly does not exist and is part of a disinformation campaign in support of the United Arab Emirates government.

The right-wing website has posted two articles by ‘Joyce Toledano’ who Spiked describe as “an analyst specialising in US, Middle East and Asian political and economic developments”.

However, according to US website The Daily Beast, ‘Joyce Toledano’ is one of several fake experts whose names are attached to stories published in right-wing news outlets around the world.

These articles are supportive of the United Arab Emirates and critical of its enemies like Iran, Qatar, Turkey and the Muslim Brotherhood. “Joyce Toledano”’s articles for Spiked attack Turkish involvement in Libya and Iranian involvement in Iraq.

Following the Daily Beast’s investigation, Twitter suspended the accounts of many of these personas.

Spiked has added a note to Toledano’s articles, saying it takes the allegations seriously and is drawing attention to them in the interests of full transparency.

It says: “There are reports that Joyce Toledano is a ‘fake journalist’. Spiked takes seriously any claim of questionable authorship, so we are adding this note to the two articles she wrote for us: one of which was on Iranian interference in Iraq and the other of which was on Turkish threats against Libya.”

“Of course, as our readers will expect, spiked will continue to pursue our long-standing progressive critique of foreign interference in states’ affairs and our defence of the democratic right to self-determination for all nations. In the interests of full transparency and openness, we are keeping the text of the ‘Joyce Toledano’ articles on our site.”

Spiked is edited by Brendan O’Neill, a regular pundit on the BBC’s politics shows. In the past, O’Neill has argued that homophobes are treated the same way homosexuals used to be; posh people are treated how poor people used to be and said that fascist terrorist Anders Breivik was a product of multiculturalism.