The Greens will let members vote on who goes to the Lords. 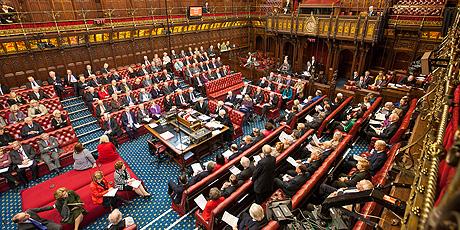 The Green Party of England and Wales will allow its members to vote on who their next appointment to the House of Lords will be and four candidates have declared their intention to stand.

Nominations are now closed and voting will take place alongside the party’s other internal elections from the 3rd to the 31st of August.

The election’s winner will be sent to the Lords the next time the government gives the party a seat in the Lords. The party was last given a seat in September 2019.

Molly Scott-Cato is a former MEP for the South-West of England, an economist and the party’s spokesperson on Brexit and Finance.

She told Left Foot Forward that she believes the Lords should be abolished and replaced with an elected second chamber. But, while it exists, she said “the best Greens” should be “making an impact” there.

She said her own track record is strong. She was the party’s first MEP in the South-West and was then re-elected as the party got 18% of the vote in 2019.

As an MEP, she said she campaigned on climate change, tax avoidance and trade and was the parliament’s rapporteur on sustainable finance, drafting reports on legislative proposals.

In the Lords, she said she would campaign on tax, finance and farming alongside Jones and Bennett – who she said she has a good relationship with.

Amelia Womack has been the party’s deputy leader since 2014. She was re-elected in 2016 and 2018 and is running again in 2020. She has run for parliament in Camberwell and Peckham and in her home town of Newport.

She said :”The cosy consensus of the House of Lords needs to be scrutinised and shaken up. We need radical yet rational voices represented. That’s what I want to deliver in the House of Lords by ensuring that the politics of hope delivers change.

As a scientist, she said she would “ensure that policy is evidence based and is scrutinised and developed from a scientific basis – something that Parliament so desperately needs.”

As a 35-year old, she said she would represent “a generation so often forgotten in politics”. Currently just 5% of the House of Lords is below the age of 50, while just 26% are women.

“Having just been shortlisted as Young Politician of the Year, an international award, I continue to work to ensure that I prove the power of our generation as well as Greens to make change happen,” she said.

Andrew Cooper has been a councillor in Yorkshire’s Kirlees for 21 years, winning six elecitons, and is the party’s energy spokesperson.

Like Scott-Cato, he said he wanted the Lords to be elected. While it is not though, he said: “There is a strong case to have people representing our Party who are responsible to an electorate, just like an MP is. Having that mandate is essential.”

While running unsuccesfully for deputy leader, Cooper has previously accused the Greens of being too London-centric and declared his intention to change that.

Rupert Read used to be a councillor in Norwich and is a former party spokesperson. He is now a spokesperson for Extinction Rebellion.

He said: “I’ve worked closely with Jenny Jones, our first peer, ever since she was appointed. For example, in May 2018, I helped draft her Lords’ speech defending the Precautionary Principle. Just two weeks ago, I helped Jenny’s team with an oral question in the Lords that got her a meeting with a Government minister.”

If elected to the Lords, he said would set up a Committee for Future Generation and use his “familiarity with Parliamentary procedures to seek green changes to legislation debated”.

He also said he’d continue to participate in civil disobedience when necessary to draw attention to climate change. “Count on me to act decisively to help arrest climate breakdown,” he said.

Parties are allowed to nominate a certain number of Lords. The Greens are the first political party to hold an election to choose their candidate.

There are currently two Green peers. The Tories have 243, Labour 177, the Lib Dems 89, the DUP 4, the UUP 2 and Plaid Cymru 1. The SNP has no Lords as it considers it undemocratic.