Of course it's a moral imperative - but it's also a strategic necessity. 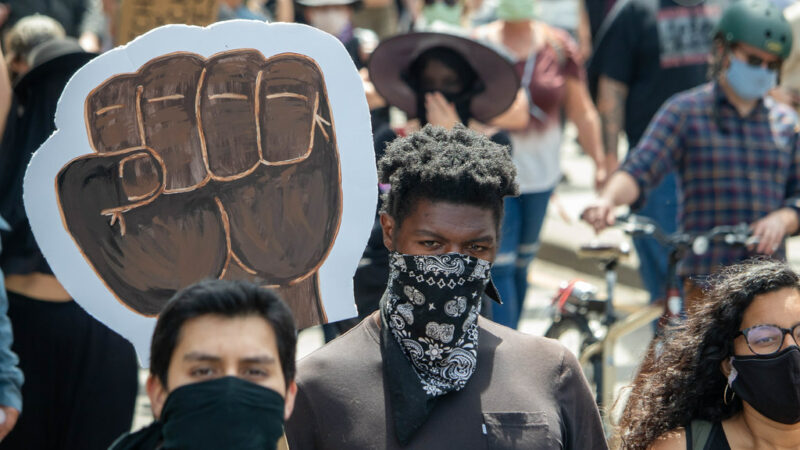 Martin Luther King: “Injustice anywhere is a threat to justice everywhere. We are caught in an inescapable network of mutuality, tied in a single garment of destiny. Whatever affects one directly, affects all indirectly.”

As the demonstrations rage on following the police murders of George Floyd and Rayshard Brooks, there’s a question all climate rebels and campaigners should be asking: “Are these protests our cause too?”

The answer is an emphatic “Yes” and we urge the burgeoning climate movements to act on that right now. This is not just a moral imperative. It’s a strategic and pragmatic necessity. Here’s why.

To slow global heating and to prepare for the inevitable crises that can no longer be avoided, governments must intervene on a massive scale.

So what stands in the way? In key polluting and fossil fuel sponsoring countries such as the US and the UK, the primary culprit is the reigning “free market” ideology that urges people to resent government and to see loosely regulated capitalism as the only route to shared prosperity.

In reality, this ideology prevents governments from acting forcefully on behalf of working families. It condemns the vast majority to chronic economic, health, and environmental danger, while our common wealth is stolen by corporations and family dynasties. And yet this madness continues to hold sway not just in the halls of power but among broad swaths of voters.

Why do so many embrace an anti-government ideology that impoverishes them? We cannot build the political power to force the government to act on the planet’s behalf until we rebuild confidence in the idea that governments can and must protect everyday people. So, again, what stands in the way?

How can the ultra-rich get away with expanding their power and privilege while the great majority of us struggle to get by?

It is not just about telling lies and selling false hope about supposed “free markets.” The corporate Right wraps itself in a mantle of cultural conservatism.

It seeks to undermine government intervention and taxation by smearing it as the transfer of jobs and income away from “the silent majority” and towards non-whites, including immigrants.

Rather than adopt directly racist language, it uses coded dog whistles such as  “Make America Great Again,” “Take Back Control” or “the Hostile Environment.”

The dog whistles are used by deeply corrupted politicians, sponsored by international corporations and billionaire oligarchs. Up to now they have proved embarrassingly effective at breaking solidarity across working class communities and the left.

What if, in the face of this, the climate movements were to make it a core strategy to systematically oppose the use of racism to divide and rule?

We are appalled by the brutal murder of George Floyd. But for climate activists, such as Extinction Rebellion, rising up in solidarity with those protesting his death is not just a matter of conscience–it  is also a practical and strategic necessity.

This has to go beyond lip service to solidarity. We must do the hard work of building racial justice into the DNA of our movement. This will include organizing workshops to foster mutual understanding, actively working to help those communities most harmed by racism, promoting racial integration in our movements at every level, and proactively linking social justice to economic fairness to averting climate collapse.

We must not be threatened by the differences among us. On the contrary, these differences can be sources of joy and mutual empowerment, if we can foster a robust understanding that the ultimate enemy is the deployment of racism, not each other. Together we can build organised mass civil resistance to bring about the structural political changes that are now absolutely necessary.

Amidst the escalating crises we now confront (of health, widening inequality and climate breakdown), only one thing is certain: sudden and profound change is upon us.

The unknown is whether the change is one we build democratically and in mutual solidarity, or whether it is driven by fascism and environmental collapse. The choice is serious beyond words. The fight for justice for George Floyd is the fight for all our futures.

Ian Haney López is a Professor of Public Law at the University of California, Berkeley, and the author of Merge Left: Fusing Race and Class, Winning Elections, and Saving America.

Roger Hallam is the Co-founder of Extinction Rebellion and author of “Common Sense in the 21st Century”.