He didn't announce any new investment. 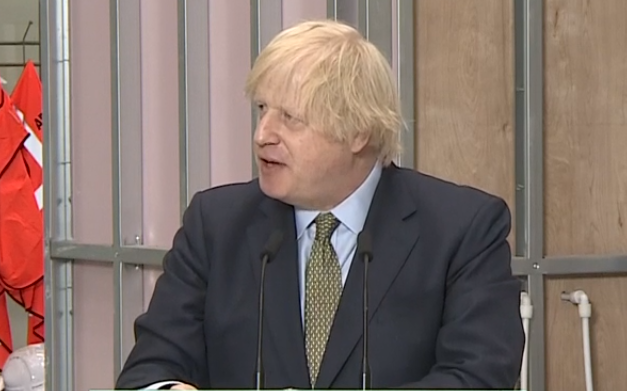 The Railway Industry Association has said its members will be “dissapointed” that Boris Johnson failed to announce any new rail projects in his speech on infrastructure investment.

Johnson made a speech in Dudley on a podium with the slogan ‘build, build, build’. He said he wanted better railways and mentioned HS2 and ‘Northern Powerhouse Rail’ but he did not announce any new investments.

Darren Caplan, Chief Executive of the Railway Industry Association (RIA), said: “The Prime Minister’s speech today urged the UK to ‘build, build, build’ to ensure an economic recovery following the Coronavirus outbreak, and it was good to see plans to unblock the Manchester bottleneck mentioned. However, whilst the speech set the right tone, railway suppliers will be disappointed by the lack of specific new rail projects the Government plans to speed up.

“The railway industry will play a key role to play in any economic recovery, and so we urge the Government to announce in the coming weeks a clear pipeline of accelerated work it will support across the country to deliver economic growth, investment and jobs. Suppliers need to see specific schemes with delivery timelines so they can plan and build their project teams, delivering a world-class rail network which benefits not just rail but UK plc more widely, its economy and long-term connectivity.”

The Industrial Communities Alliance has called for investment in railways between cities and their surrounding towns and villages – but Johnson has ignored these calls, focussing instead on headline-grabbing, expensive inter-city railways like HS2.