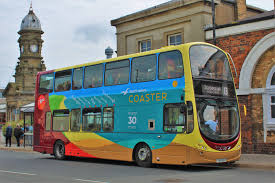 As Boris Johnson announces plans to invest in infrastucture, the representatives of older industrial areas have released a report saying what they want from the government.

The Industrial Communities Alliance (ICA) is a cross-party group of local authorities representing the ‘older industrial areas’ of England, Scotland and Wales. They represent about a third of the population.

Their areas represent many of the most deprived in the country with problems that, the ICA say, can be traced back to job loss and economic restructuring, including former textile, shipbuilding and manufacturing areas.

Most of these areas are in the North of England, the Midlands, Scotland and Wales – but southern areas like Dover and Kent are also involved.

In a new report, the group sets out what its areas need in terms of infrastructure. Here’s six things they’re calling for.

The ICA say that for many years, rail investment has focussed either on London or on links between the big cities. London’s Crossrail cost £20bn and HS2 will cost £100bn.

On the other hand, older industrial Britain has been neglected. While faster travel between say Cardiff and Swansea is great, the priority should be better rail links between cities and their surrounding towns and villages.

As more and more jobs are in big cities, more and more people are commuting to those cities from the surrounding area. With a “skeletal” rail network and “overloaded” rolling stock, people travel by car, causing traffic.

The ICA’s solution is to re-open railway lines and stations. They say this would cost a fraction of the “prestige” schemes like HS2.

Examples of succesful line re-openings are the Waverley line to Edinburgh, the Ebbw Vale line to Cardiff and the Robin Hood line to Nottingham.

Projects which should be developed, the ICA says, are lines to Newcastle, Doncaster-Sheffield airport and the East Cleveland Line. South Wales’s Pontypool & New Inn should be made a rail hub, linking to Bristol, Newport and Cardiff.

As well as improving transport links, this investment would be good for British steel and civil engineering.

Away from the cities, much of older industrial Britain still relies on roads and investment in rail and public transport can only go so far.

So the ICA says some modest road investments are needed. It is not proposing any big new motorways but it wants more access roads, by-passess, bottlenecks fixed and better connections to remote places like West Cumbria

Their argument is that access roads, including new motorway junctions, can open up land for industry and housing while by-passes take traffic out of towns and villages, improving road safety and reducing air pollution where people live.

For an example of how road investment can transform an area, the ICA cite the Dearne Valley Link Road. It links former South Yorkshire mining communities to the M1 motorway and has helped bring jobs and homes.

The ICA hopes that the dualling of the A465 can help South Wales’s former mining communities in the same way.

As the coronavirus crisis has limited how many people can get on buses and trains, the ICA says cycling and walking need to be encouraged.

Road layouts should be changed and some streets should be closed off to cars and buses. Old railway tracks and canal towparths should be turned into cycle paths. Train and bus stations should provide safe bike storage and trains should have more space for bikes.

4. Give councils money to invest in buses

Since Margaret Thatcher deregulated bus services, private companies have either abandoned or cut the frequency on routes they can’t make money from. These are mainly those outside of big cities.

The services these companies do run are often funded by subsidies from local authorities. Austerity has meant these councils have less and less money to hand out to bus companies so more services have been cut.

The ICA says that central governments should give more money to local authorities to subsidise bus routes.

Local authorities should also be given money to fund real-time bus information (either at the bus stop or via an app), smart ticketing like London’s Oyster Cards, new bus stations (not just shelters with nowhere to sit) and bus lanes.

The UK plans to make all new cars electric by 2035. Before then, the whole of the UK needs huge investment in charging facilities – at homes, at workplaces and elsewhere.

The ICA says that its older industrial areas should be prioritised for this investment because they rely on cars more than most.

The Treasury’s ‘Green Book’ sets out how the costs and benefits of infrastructure projects should be judged.

The ICA say that its rules discriminate against poorer areas. One of the main factors the Green Book rules take into account is savings in travel time.

But these savings are travel time are weighted depending on the ‘productivity’ of those travelling. By productivity, the ICA says that in practice the Green Book means wages.

As Londoners tend to earn more, this biases government in favour of spending on transport projects which help Londoners – like Crossrail or HS2.

According to the ICA this “results in accumulated advantage, allocating money to the same places again and again whilst others languish with little or no investment.”

Previous research by the Centre for London also found that this resentment about the Green Book rules is common among local politicians outside of London.