Dominic Cummings said deals to replace our relationship with the EU would be a 'walk in the park'. 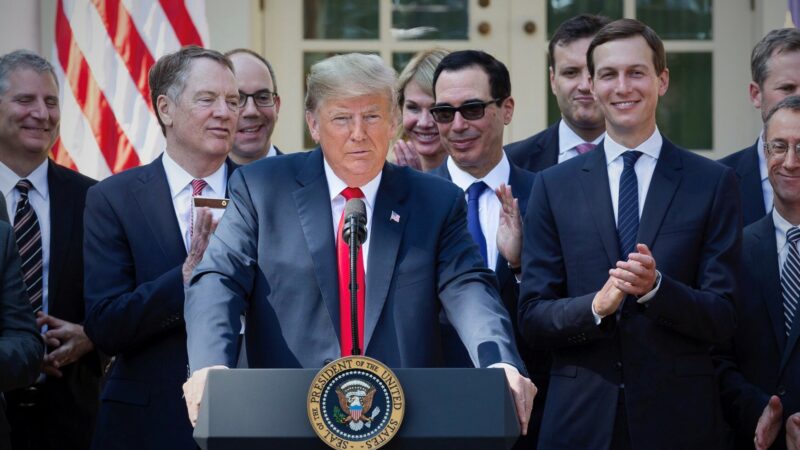 US Trade Representative Robert Lighthizer (pictured left of Trump) had bad news for the PM on Wednesday.

Lightizer told the House Ways & Means Committee – the chief tax-writing committee of the House Of Representatives – that securing a US-UK trade deal by the end of the year is unlikely.

It is the UKs objective to strike deals with the USA, Australia, New Zealand and Japan that would make up the shortfall of no deal with the EU – and open the way for the UK to join the  Comprehensive and Progressive Agreement For Trans-Pacific Partnership (CPTPP). The agreement covers Canada, Australia, Brunei, Chile, Japan, Malaysia, Mexico, New Zealand, Peru, Singapore and Vietnam.

Lighthizer was asked if a deal with the UK could be struck this year. He responded by saying “that would be a very, very, very quick time. I think it’s unlikely that that happens. I would say it’s possible, although unlikely, that we could get an agreement this year. It is almost impossible unless the members decided they wanted to do something extraordinary to have it actually come before the Congress before November.”

Lighthizer said the timelines established in the 2015 Trade Promotion Authority law make it “nearly impossible” for Congress to consider a US – UK trade deal this year even if the two sides manage to reach an agreement. He did say that he was confident the two sides eventually would reach a deal, saying the question was only a matter of “when.”

The UK was looking to get a deal in the bag before the November US presidential election, but Washington insiders say that the Democrats would have to agree to a deal at the same time as they are in a bloodbath with Trump. “That’s not really possible” one US union official told me.

They also warned not expect the Democrats to be any softer on trade even if Joe Biden wins – they too will have their eyes on agri-food, pharma and the NHS.

“If the UK does not reach a trade deal with the EU then UK GDP would fall by 7.6% over 15 years…A deal with the US would deliver an increase in GDP of 0.16% – some deal” the US union official said.

US and British negotiating teams have begun a second round of ‘virtual’ trade talks. The US has tabled its proposals in most areas – but the UK has tabled text only in “some” areas, he said.

The coronavirus pandemic means that there is an inability to conduct in-person negotiations. Lighthizer is on record as saying he didn’t think a major trade deal could be negotiated virtually. “The biggest single problem is you don’t have face-to-face meetings and I’m not one that believes that are you ever going to negotiate a major trade deal over video or over the telephone. I just don’t think it’s possible. The video tends to be sort of scripted sort of things and you end up not having 10 to 12 to 15 hours together in a room, which I think is necessary to come to compromise. So that’s the biggest problem.”

The US negotiators are expected to drive a hard bargain. They see the UK being in a weak position with overly optimistic statements and previous promises from Johnson hobbling the UK – while trying to get deals on five fronts. Deals which Dominic Cummings previously claimed would be a ‘walk in the park’…

Lighthizer has already said that he believed discussions with the UK on agriculture would be ‘less contentious’ than talks with the European Union as Johnson is desperate for a deal and will perform a u-turn on previous commitments, particularly allowing US poultry washed in a chlorine solution to be sold in the UK..

The US wants ‘science-based standards’ on agriculture and will not agree to a deal without them, Lighthizer said. If the UK adopts (or rather, retains) the EU’s regulatory standards, which include a ban on poultry washed in a chlorine solution, the US will give the UK less in a trade deal.

In addition, the US has its eyes firmly on the pharma industry and the NHS – particularly the ability to sell US manufactured drugs at higher prices on the UK market.

On Wednesday we learnt that International Trade secretary Liz Truss has ‘opened talks’ with Australia and New Zealand (the negotiating objectives are set out here). The TUC has already published the concerns of the TUC and Australian unions when the talks were first mooted in 2018.

In addition, the TUC is worried that joining the CPTTP trading bloc is one of the UK government goals: the CPTTP has clauses to set up secret Investor State Dispute Courts. It has no enforceable protections on workers and consumer rights, and would risk an increase of dumped imports from Vietnam putting UK jobs on the line.

The bad news comes in the same week that Bill Emmott, chairman of the Japan Society of the UK and former editor-in-chief of The Economist, said there was ‘zero chance of a UK-Japan trade deal until the EU-UK trade arrangements have been agreed’.

Boris Johnson’s hopes of securing a quick trade deals are being dashed by the day.

Tony Burke is Unite Assistant General Secretary and the TUC General Council Lead on Employment and Union Rights. He is a Contributing Editor to Left Foot Forward.