As a government sweetheart deal for big newspapers hits headlines, Jamie Beauvais asks if the concept of free and independent media has been lost. 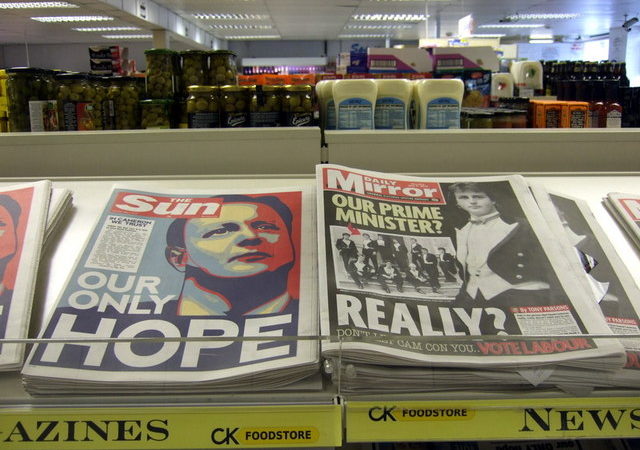 The three-month ‘All in, all together‘ government media campaign, launched 17 April, represents an estimated £35 million stimulus for a subset of the beleaguered national press.

The campaign, which in principle would support mainstream and regional press alike, was set out as a government advertising partnership with the industry, promoted as a way of delivering ‘government communications in an intimate, human and compassionate tone to which readers can relate’.

The campaign began with a universal cover wrap displaying the government’s official slogan – ‘Stay at home for the NHS, your family, your neighbours, your nation, the world and life itself’, accompanied by the rainbow symbol being used to signify support for frontline workers.

Despite the clear messaging and encouragement of solidarity exemplified in the initial wave of government-sponsored articles, subsequent pieces paid for by the state have been criticised for their partial, pro-government stance.

Among the critics was Guardian and Observer journalist Carole Cadwalladr, who said that such articles are ‘pro-government propaganda pieces about how well it is handling Covid-19’, as well as a piece in The London Economic which suggested the government was lining the pockets of large newspaper groups with editorials praising its coronavirus response.

Examples cited for criticism included sponsored articles published by The Daily Mail and The Sun in late May which heaped praise on the government’s Self Employment Income Support Scheme (SEISS).

Citing personal stories of a self-employed yoga teacher and dog walker, the pieces are unrelenting in their advocation of the scheme, praising the ease and simplicity of the aid process and implying that neither individual would suffer economically in future.

The fact is that the scheme has flaws, despite its positive aspects. Matt Dowling, CEO of independent professionals network The Freelancer Club has told The Express that an estimated two million self-employed are ineligible for any help from the government.

“Those who earn too little, too much, started freelancing too late or took time out to support children, they’ve been left high and dry,’ he said.

Labour MP Tracy Brabin has echoed Dowling, also suggesting that the scheme would soon be wound down and stopped.

Brabin took issue with Chancellor of the Exchequer Rishi Sunak’s insinuation that, unlike furloughed staff, the self-employed could keep working. The feasibility of working and an individual’s reliance on SEISS are both dependent on their industry reopening post lockdown and its ability to survive any inevitable economic downturn.

‘How can a self-employed person in theatre keep working if the theatres [remain closed]?’ Brabin said.

Government-sponsored articles that praise policy without impartiality and acknowledgement of the limitations cited above reduce dialogue on such issues, limit public scrutiny, and undermine the notion of a free press.

Yet Minister for the Cabinet Office and Chancellor of the Duchy of Lancaster Michael Gove, speaking prior to the launch of the campaign, himself noted: ‘Robust scrutiny is to be welcomed: it is the duty of the media.’

For the state to fund pro-government articles in the country’s most-read publications at a time where government failure is rife would suggest this sentiment is now lost.