Boris Johnson promised there'd be no more austerity. Was he telling the truth? 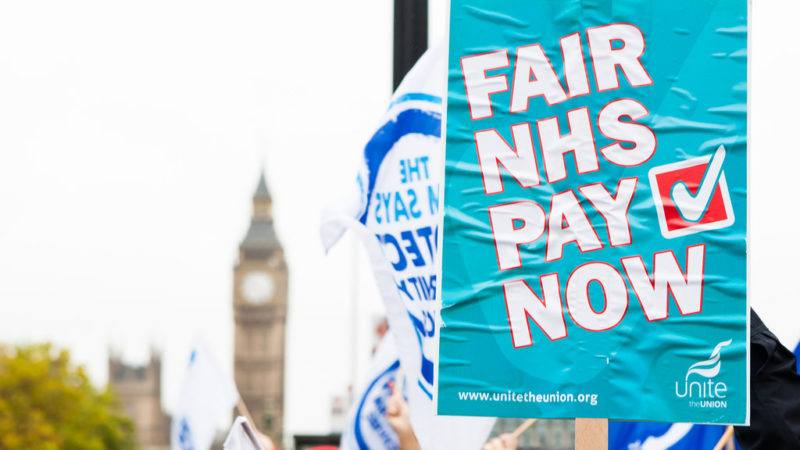 The government have come under fire after reports emerged today that a public sector pay freeze is on the cards.

A leaked Treasury document obtained by the Telegraph suggests public sector workers will be asked to pay for the pandemic by having their pay frozen. It would amount a real-terms pay cut when inflation is taken into account.

The plans could be announced within weeks, in response to Whitehall panic that the coronavirus crisis will cost the Exchequer almost £300 billion this year.

Other measures reportedly under consideration include an increase in income tax, and the end of the triple lock on state pension increases, alongside a two-year public sector pay freeze. Public sector workers faced years of pay freezes between 2010 and 2019.

On the 30th April, Boris Johnson pledged that cuts and austerity would ‘certainly not’ be how the pandemic was paid for.

UPDATE: At a lobby briefing on Wednesday, the PM’s press secretary downplayed the leak. “We obviously recognise the work of our frontline staff [during] this crisis, and will remember that after this crisis,” he said.

The Unite union’s assistant general secretary Gail Cartmail called on the government to row back from the idea:

“This is a huge own goal by the government.  Public sector workers are on the frontline saving lives, keeping people safe and maintaining the economy. To suggest that their hard work, endeavour and sacrifice should be rewarded with a freeze in their pay is simply insulting.

“A public sector pay freeze is totally at odds with what the general public wants, Unite’s own survey of the general public last week found that 71 per cent wanted increased taxes of the wealthy rather than a return to austerity. With other key priorities being increased funding for the NHS and more pay for key workers.

“There simply cannot be a return to austerity mark two.  Working people must never again pay for a crisis not of their own making. I challenge the PM to step up and step away from this suggestion without delay.  He, among countless others, has seen first-hand the value of public sector workers literally saving lives.

The Scottish National Party’s Shadow Chancellor Alison Thewliss said imposing another decade of Tory cuts on millions of people including NHS workers was not the right response to the coronavirus crisis.

Alison Thewliss MP said: “The UK government must rule out a return to Tory austerity, which has damaged the economy and caused devastating harm to people, public services and communities across the UK…

“Boris Johnson previously pledged austerity would ‘certainly not’ be the Tory government’s response to this crisis. He must now make it absolutely clear by giving a cast-iron guarantee there will be no return to austerity and ruling out a freeze on public sector pay. It would be utter hypocrisy to applaud our health and social care staff during this crisis, then freeze their pay afterwards.”

The Fire Brigades Union (FBU) has also hit back at any attempt to make key workers pay for ‘yet another crisis they did not cause’ and has vowed to fight any real-terms pay cut.

Matt Wrack, FBU general secretary, said: “Public sector workers were forced to pay for a financial crisis caused by the banks’ drive for endless profits and by a negligent government deregulation agenda. Now, once again, the Tories are preparing to make the same workers pay for another crisis they did not cause.

“Firefighters have had a real-terms pay cut of around £4,000 over the last decade, much like workers across the public sector. Key workers and the public they serve will not accept another attempt to pass the buck from the rich to working people.  Far from discussing pay cuts, the government should instead be considering how best it can reward those who have got us through this pandemic.

“Public sector workers, from nurses to teachers, have been the heroes of the Covid-19 pandemic. They have put their lives at risk to save ours. Their service to our country must be rewarded with a pay rise, not taken for granted with a pay freeze. We cannot return to the dark days of austerity.

“IPPR research has shown that pay increases for public sector workers often result in higher economic growth and tax receipts because it drives higher spending in the economy. With new figures showing GDP has fallen significantly, a pay rise for workers should be a key part of a fiscal stimulus to get our economy going, not a pay freeze.”

One Response to “Is this how NHS staff are rewarded? Outrage as Tories consider public sector pay freeze”