The left must be prepared to fight a rising tide of prejudice after this pandemic. Pictured: A Spanish flu ward. 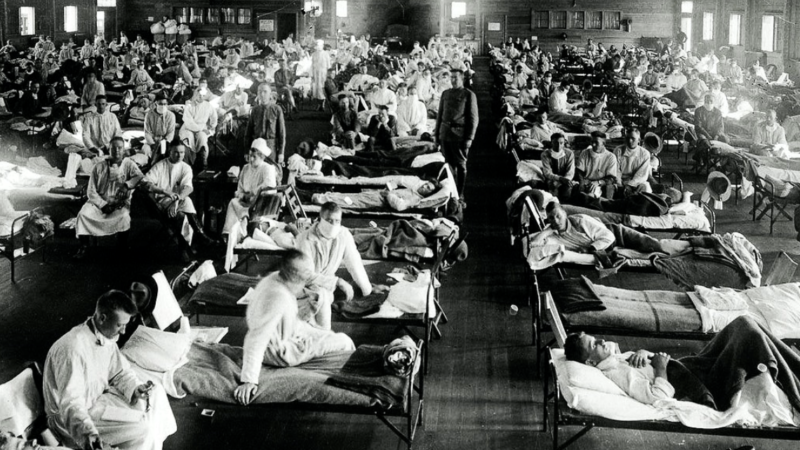 Throughout history, the impact of disaster has always brought about the opportunity for change.

Optimists argue that catastrophe encourages the exposure of societal inadequacies that can then be amended for the better. The pessimist, on the other hand, maintains that trepidation stemming from widespread disaster can encourage the worst instincts in people. The truth probably lies somewhere in the middle.

Historically, the onset of widespread disease has been no different. The aftermath of the influenza outbreak in 1918 saw numerous countries to introduce universal healthcare, while the Black Death contributed to the eradication of feudalism, with greater social mobility for the peasantry throughout the 14th and 15th century.

Unfortunately, progress was often accompanied by an increase in suspicion and the pursuit of attributing blame, this consistently resulted in widespread instances of xenophobia and prejudice.

In the wake of the Black Death, Jewish communities were targeted and labelled as perpetrators of the disease amidst conspiracy theories that they had poisoned wells to encourage the spread of the illness, as Richard Levy wrote in his book Antisemitism. Similarly, in 1901, the onset of bubonic plague in Cape Town was followed by racialised quarantining of Black Africans in a camp on the outskirts of the city, a precursor to apartheid South Africa.

The act of dubbing the 1918 influenza outbreak as ‘The Spanish Flu’ also resulted in many associating the disease’s origin with Spain as a misconception. Public health history has tended to associate infectious diseases with foreign nationals. This encourages the perception of a causal relationship between foreign populations and the spread of disease.

The outlook today looks similar. Globally, many argue for the potential of progressive change. But despite this, xenophobia stemming from the crisis is rife. So much so that there is a now a detailed Wikipedia page for a ‘List of incidents of xenophobia and racism related to the COVID-19 pandemic’.

Instances include a perseverance by Donald Trump to refer to coronavirus as the “Chinese virus” whilst he pedals conspiracy theories that suggest the virus was manufactured in a Wuhan laboratory. Simultaneously, online reporting forum, Stop AAPI Hate, found that there had been 1497 reported cases of discrimination against Asian Americans in the USA between 18th March & 15th April 2020.

Prompted by unsubstantiated fears that they may be carriers of Covid-19, African people have also been subject to racist discrimination in Guangzhou, China. This includes instances of evictions and barring from shops. Similarly, Hindu nationalists have utilised the coronavirus to increase anti-Muslim rhetoric in India.

Unfortunately, such instances seem to be becoming prevalent in the UK. Earlier this week, The Guardian reported that throughout the UK, Anti-Asian hate crime had risen by 21% in the run up to and during the lockdown period. Individual instances included a woman in Solihull being called “A dirty Chink” who should “take [her] coronavirus home”, an NHS nurse of Asian descent being assaulted on her way to work, and heavily-shared Twitter posts which encourage negative stereotypes about the origins of the virus.

If inquiries determine the origin of the virus was China, could we see a surge in prejudice?

We have also seen elements of the UK press previously encourage the notion that societal ills within the UK were largely the fault of migrants, refugees, and the intrusion of foreign powers; namely the EU.

Given the opportunity to shift blame in the future, would a similar tactic be deployed by utilising an anti-Chinese/anti-foreigner sentiment when it comes to analysing the consequences of the coronavirus?

We have to buck the historical and global trend of demonising a foreign entity when it comes to this pandemic – and instead, identify our own shortcomings, while fighting for progressive change.

Jamie Beauvais is a writer.