SAGE members have condemned the shift from 'Stay Home' to 'Stay Alert' in no uncertain terms. 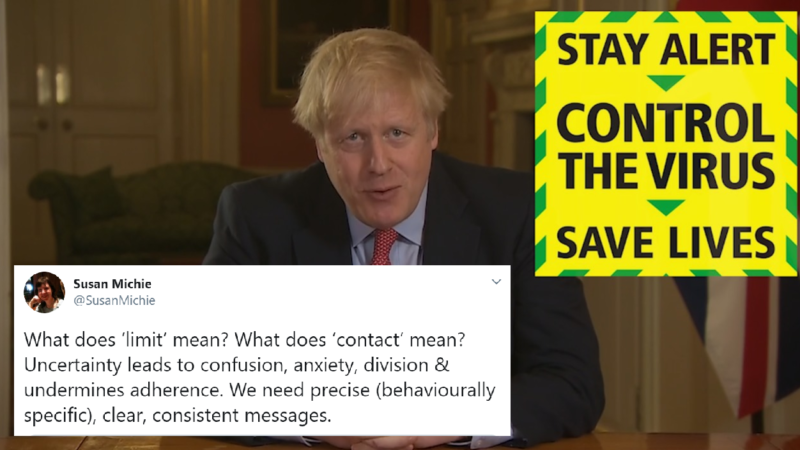 Several of the government’s official scientific advisers have poured scorn on a shift in the coronavirus messaging.

LFF is aware of at least five members of the government’s Scientific Advisory Group for Emergencies and its sub-committees who have publicly slated the move.

It comes as the government urge those who can go back to work to do so – announcing the shift only the night before it was to come into force. The shift has been seen as a victory for some of the Conservatives’ big business backers, and Johnson’s former employers at the Telegraph – who have been urging a loosening of the lockdown.

SAGE sub-committee member Prof Val Curtis, from the London School of Hygiene and Tropical Medicine, retweeted a number of posts mocking the messaging, including a video that described it as ‘bizarre’, and one that questioned how the police would enforce the ‘stay alert’ demand.

Another government adviser, Prof Robert West – an expert in health psychology from University College London – said the government is ‘not following the science’ on its new messaging:

Another SAGE sub-committee member, Prof Stephen Reicher – a social psychologist from the University of St Andrews – quoted Nicola Sturgeon as saying ‘people will die unnecessarily’ due to the lack of clarity in the new messaging. He added:

Professor Robert Dingwall, who sits on the government’s New and Emerging Respiratory Virus Threats Advisory Group (NERVTAG) shared Prof Reicher’s tweet that ‘the way this has been introduced and communicated risks turning a modest and sensible step into a calamity’.

The government released the list of SAGE members last week.