"It would be false for me to say we can continue to meet indefinitely an unspecified level of demand." 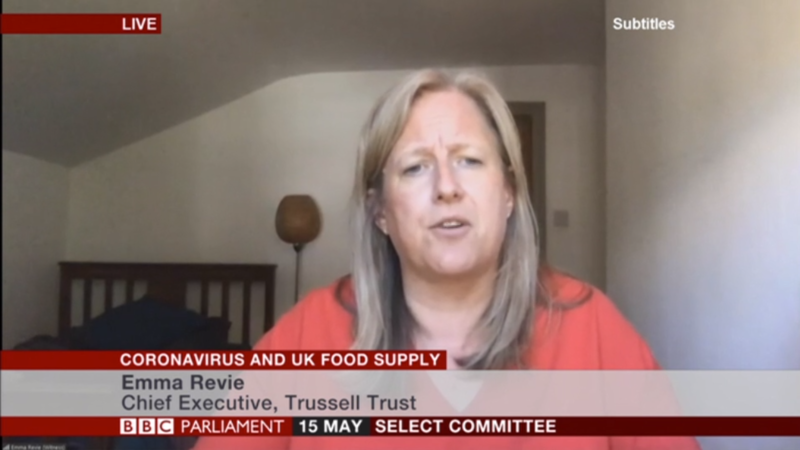 The Chief Executive of the Trussell Trust has revealed a surge in food poverty amid the coronavirus pandemic.

The food bank charity saw an 81% increase in demand in the last two weeks of March, as the crisis started to bite.

They reported a 122% increase in the number of children needing help in the last two weeks of March, with the number of families with children using the service doubling. People were ‘instantly facing destitution’ Chief Exec Emma Revie told the Commons’ Environment, Food and Rural Affairs committee on Friday.

The impact of the pandemic was ‘instantaneous and profound’, Ms Revie said.

Some food banks have started delivering directly to schools, with one food bank reporting that 20%-40% of parents unable to access food vouchers through the contracted-out Edenred service. Ms Revie said: “When these systems don’t work, families with children are without food.”

The Trussell Trust chief executive added: “It would be false for me to say we can continue to meet indefinitely an unspecified level of demand…People are falling into financial hardship – the solution to financial hardship is not food. We are treating one symptom of an underlying problem.”

The charity have requested a new income support scheme for the most vulnerable groups, as welfare levels just aren’t enough for some families to make ends meet.

“The issue must be reducing the flow of people into food banks, rather than the level of support those people get there,” Ms Revie told MPs. Lindsay Boswell, CEO of FareShare – which distributes surplus food to those in need – agreed.

Mr Boswell said that between March and April the charity saw a 100% increase in volume of food handled by the organisation.

The FareShare boss told MPs that more than 2000 schools on FareShare’s books are having to supplement the government’s troubled food voucher scheme (£15 a week for low-income parents) with food parcels.

FareShare have seen a net increase from 11,000 to 12,200 in the number of organisations they are currently supplying with food during the pandemic.

The charity pointed to the success of a now-finished trial which saw surplus food from farms redistributed. The government-backed scheme would cost less than £5m a year to ‘double the volume of food we’re able to redistribute’, Mr Boswell said. This would still only account for 1% of the food wasted at the farm gate in the UK. FareShare are calling for it to be rolled-out nationwide.