What's Trident got to do with covid-19? 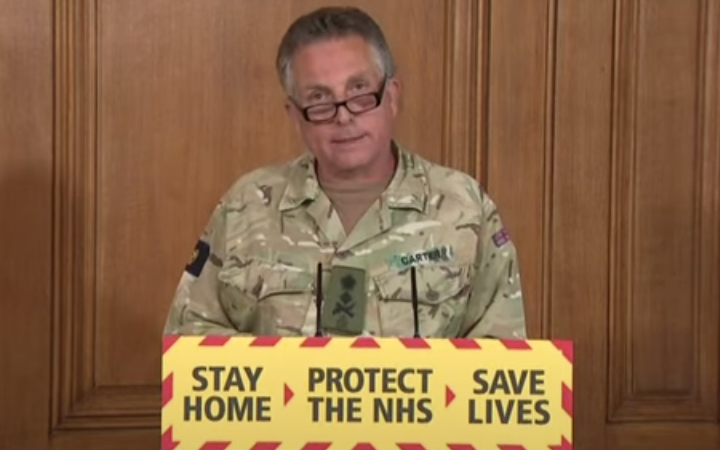 Has Britain become a country in which government briefings are given by a man in military uniform?

General Nick Carter, the Chief of the Defence Staff, popped up next to Dominic Raab at yesterday’s coronavirus briefing.

He was supposedly there to tell us about the role of the armed forces in tackling the pandemic. In practice, he produced a lot of words while saying very little.

Firstly, Carter provided one solid piece of information. He said that between 3,000 and 4,000 UK armed forces personnel are involved in tackling Covid 19, with another 20,000 available. The latter group is not active because “the sort of skills and capabilities that are in the remaining 20,000 are not necessarily the ones that people need at this point in time”.

Like most people, I am grateful to everyone who is building hospitals and delivering medical supplies, including military personnel. The impression given in parts of the right-wing media is that coronavirus has become the armed forces’ main focus. Defence Secretary Ben Wallace claims that the “entire” Ministry of Defence is devoted to tackling it. This is, to put it bluntly, a lie.

According to the latest figures, the UK armed forces have 192,160 personnel. Of these, 132,360 are full-time trained troops. So what are the other 108,000 or so doing? Whatever Nick Carter’s intention, he has made clear that the armed forces are not focused on tackling coronavirus. Over 87% of them are not involved at all.

Carter talked vaguely of what the rest of the armed forces are up to, referring to “operations in Afghanistan, Africa, the Middle East and further afield”. Perhaps “further afield” includes Saudi Arabia, where the RAF are training and assisting the Saudi forces who have spent five years targeting Yemeni civilians ). While some troops are helping to build hospitals in Britain, other UK troops are helping Saudi forces to bomb hospitals in Yemen.

The second thing we learnt yesterday is that the military establishment is increasingly shameless about using the coronavirus crisis to promote and increase the role and power of the military.

In a particularly bizarre moment, Carter used yesterday’s coronavirus briefing to express his belief in “defending the homeland with the nuclear deterrent”. Yesterday morning, ahead of Carter’s appearance, the Times ran a story based on anonymous quotes from a “senior army source”, suggesting that the armed forces should take over responsibility for logistics from the NHS.

Two days earlier, Sun columnist Trevor Kavanagh used a string of inaccurate statistics to make an attack on Public Health England and contrast them with how well the army had done.

This power-grab is entirely consistent with the recent behaviour of the militarist lobby. In the last 15 years or so, everyday militarism has become an increasingly prominent feature of British life.

Armed Forces Day is now an annual institution, the UK government funds “military ethos” programmes for “disadvantaged” school pupils in England and the Cadet Expansion Programme has seen millions of pounds of public money going into military cadet units across the UK just as other youth services are cut.

The third point we can take away from yesterday’s events is that the armed forces are the last people who should be responsible for security.

Carter’s alarming view of the world was revealed when he finished talking about coronavirus and then said, “Despite all of this we are still involved of course in protecting the country”.

Despite their work on coronavirus, they are involved in protecting the country? Do Carter and his colleagues not regard tackling a pandemic as a matter of protecting people in Britain? Clearly not.

Militarists live in a world in which protection and defence are mere euphemisms for war and preparations for war. If you’re in hospital with coronavirus, or you’re a care worker without protective equipment, or your mental health problems are getting worse in isolation, or you’re struggling to pay the rent because you have lost your job, the immediate threats facing you do not include a military invasion by a foreign power.

Yet in the privileged world of the military elite, such things are of secondary concern to preparing for war.

Nineteen charities and NGOs yesterday published an open letter calling for military resources to be diverted to tackling coronavirus and related problems.

Covid 19 is a deadly reminder that armed force cannot make us safe. We urgently need to transfer military budgets and resources to protecting us from real threats to human security, including pandemics, poverty and climate change.

While some see the pandemic as an opportunity to promote armed force, the rest of us need to take the chance to restructure our society and economy based on real human needs and security.

Symon Hill is campaigns manager of the Peace Pledge Union and a history tutor for the Workers’ Educational Association.