Kate Hudson reflects on nearly two decades at the helm of the Campaign for Nuclear Disarmament. 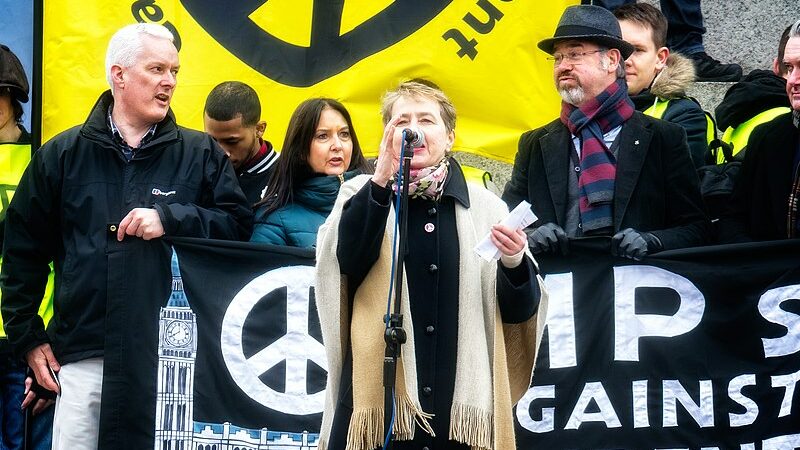 When I accepted nomination as a vice-chair of CND in the summer of 2001, I had no idea how much the world would change by the time I was elected that September 2001.

Certainly I knew that the world was becoming a more dangerous place – NATO was expanding, missile defence was back with a vengeance and new nuclear weapons were on the agenda. But I hadn’t anticipated 9/11, the ‘War on Terror’ and the Project for the New American Century.

Just days after the terrible attacks on the US, I was elected by CND conference: delegates had supported my hustings speech – that we were united in condemning all forms of terrorism, by states too, not just by non-state actors.

The years that have followed, as Chair from 2003, and as General Secretary from 2010, have been a roller coaster – the Iraq war, Trident replacement, missile defence, NATO, nuclear power, ‘low yield’ nuclear weapons, nuclear ‘use’ policies, the climate emergency: the challenges have been endless. But that has always been the case for our movement.

The greatest lesson that I have learnt, both from CND’s history and my own time in office, is that CND is most effective when we work in alliance with others, united across the movements, embracing diversity and engaging internationally. And above all I value CND’s democracy, the fact that it is a member-led organisation and that it makes its own political decisions, without fear or favour. And sometimes that means hard debate and discussion.

But that is the organisation’s greatest strength, because only a movement open to different views can adapt and develop in an ever-changing world. CND members are so passionate about our goals we are determined to get it right. As a result we have been able to play a leading role in virtually every peace campaign since CND was founded: from the Cuban missile crisis to the war on Vietnam, from the height of the Cold War to detente, from the ‘evil empire’ of Ronald Reagan to the end of the Cold War, through the aggressive wars of Bush and Blair to the world of Trump and beyond.

Whatever the context, CND has worked with others, in Britain and abroad, to find the most appropriate campaigning forms to bring our own anti-nuclear issues to the fore, to make them central to the current political agenda.

Our most important asset has always been the accumulated experience of our members and I am confident that will continue. We are most successful and effective when we relate directly to people’s most pressing concerns – linking our issues to the reality of what is going on in the world.

Nuclear weapons are not the preserve of technological or military experts, in some specialist niche that isn’t relevant to ordinary mortals. Nuclear weapons are the concern of us all, for in them humankind has created something that could end our very existence – and governments will only shift on nuclear weapons policy when enough of us demand change. We need to make that demand, in our thousands, in our millions.

The history of CND is the history of post-World War II, told from the side of those fighting for humanity against the horror of war. It is the story of ordinary people’s struggles to shape a world without nuclear weapons and war, based on legality and morality; to make our governments responsive and accountable over our right to stay alive, our right to breathe air free of radioactive pollution, our right to say no to the indiscriminate killing of other peoples. We continue to make this history and I am proud to have been part of our struggle to bring our vision of the world into being.

It has been an immense privilege to serve in the leadership of CND for almost two decades and I thank all our members and supporters for the trust and kindness that you have shown me. Together we will prevail.

Kate Hudson is the outgoing General Secretary of the Campaign for Nuclear Disarmament.

One Response to “On standing down as General Secretary of CND”