"Two governments who are usually at loggerheads are working together as closely and harmoniously as we've seen for years." 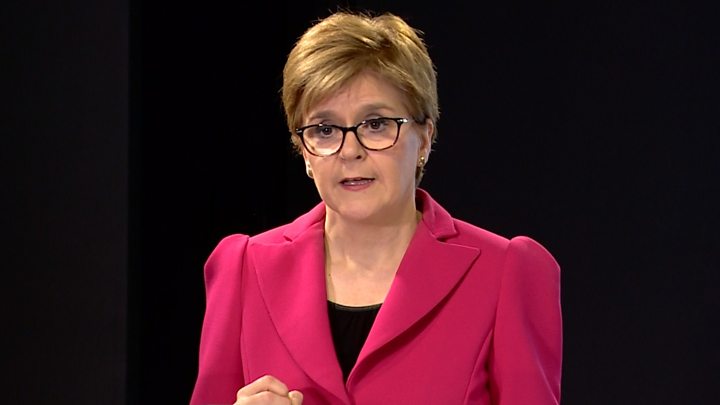 “Why am I watching Nicola Sturgeon reveal COBRA decisions before the British Prime Minister? What the hell is going on????” He Tweeted with a rage that he usually reserves for political correctness or vegan sausage rolls.

He wasn’t the only one. Mail on Sunday columnist Dan Hodges weighed in too. “Nicola Sturgeon is playing stupid political games here. She’s deliberately making her statement in advance of the UK government. I genuinely thought she was better than this.” One City AM writer notched it up ever further by comparing her speech to a coup.

Meanwhile, amid the heat, Nicola Sturgeon gave a very measured and assured press conference on behalf of the Scottish Government.  She was soon followed by Boris Johnson speaking in London, who was somewhat more glib.

Despite the different styles, there is a massive degree of consensus and similarity between the substance of their responses. Sturgeon may have presented her case a bit better, and opted to avoid Johnson’s unnerving (but probably correct) claims that many more of us will soon die, but what’s clear is that both are following very similar strategies.

The most notable difference was the Scottish Government’s advice for gatherings of 500+ people to be stopped. Despite some of the headlines, this is a recommendation rather than a binding rule, with further details to be published this weekend.

The advice will come into effect on Monday, by which point calls will resound in Westminster for the UK government to follow similar steps. In any case, many large events are already taking steps to close down, with the major football leagues on both sides of the border agreeing to suspend their matches.

When it comes to schools, universities, public places, transport restrictions, travel advice and working from home, both governments are generally on the same page.

It was a slightly surreal tone, as political rivals reinforced each others points while most of the dissent coming from the former Director of Public Health, John Ashton. It was only when the question of the 2020 budget came up at the end of the show that normality was returned and the different parties could get back to attacking one another.

There are obvious reasons for alignment. Britain is an island, and there has to be coordination and cohesion in terms of its response (just as the executive in Northern Ireland will have to work with the Irish government). Viruses don’t recognise borders, and there are only so many ways that neighboring governments in a shared economy can deviate from one another in how they deal with it. However, this also means that both administrations will bear a shared responsibility for how this strategy works out.

It seems that the governments in Scotland, England and Wales have all reached similar conclusions about how to mitigate the risks. For better or worse, the British strategy seems to be slower and less interventionist than many comparative European economies. This means that if one of them has got it wrong, then there’s a very good chance that all of them have.

Across Europe, different governments are responding with different measures. Some are banning public gatherings, some are imposing travel restrictions. Denmark, for example, has put the entire county under lockdown, Spain has declared a state of emergency while the Republic of Ireland is curbing sporting events and shutting schools. The scale of the crisis in Italy has forced it to take even more restrictive steps. Italy is in the situation that all others are trying to avoid, and the stories my Italian friends have shared have been truly horrific.

Some are saying the approach hasn’t been active enough, while others are saying it’s the best way to handle the virus.

In any case, this weekend, all across the UK, people will get on planes, trains and automobiles. They will go to concerts, plays and sporting events. They will eat and drink in restaurants and bars, visit friends and go to museums and parks. People will still fly to and from viral hotspots. As things stand, children across Britain will go to school next week and millions of workers will still head to their offices.

By this time next week we’ll have a much better idea of how well it badly the strategy is working. But one thing we do know for sure is that when two governments who are usually at loggerheads are working together as closely and harmoniously as we’ve seen for years, it’s a sign that we’re no longer in normal political times.

One Response to “Coronavirus: Why Sturgeon and Johnson are both singing from the same hymn sheet”