The union said the judgement was bad for the economy. 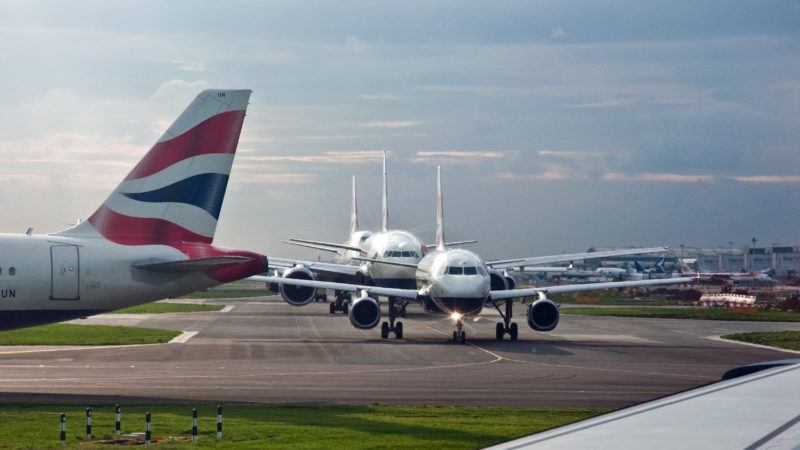 Progressive politicians have welcomed the Court of Appeal’s decision that the government’s consent to a third runway at Heathrow was given unlawfully.

However, the trade union representing airport workers said it was dissapointed in the decision and that it was bad for the economy.

The court ruled that, in 2018, then Transport Secretary Chris Grayling had acted unlawfully when he approved a third runway at Heathrow without outlining how this met the government’s legal climate change obligations.

The government has said it has no plans to appeal this decision although Heathrow Airport does plan to appeal to the supreme court.

Caroline Lucas welcomed the judges’ decision because that airport expansion is not compatbile with climate science. The Green MP said:

“The Court of Appeal has made the decision that the Government was too cowardly to make itself. Heathrow’s expansion, or any airport expansion, is not compatible with climate science. It’s not even compatible with the UK’s own climate targets.

“This has saved Boris Johnson from the inconvenience of lying down in front of the bulldozers. But it should not have been left to the courts to rule on this. If Government commitments on climate are to mean anything, they have to result in the right decisions being made on big infrastructure projects.

“All airport expansion should now be stopped, as should massive road-building projects. Instead we must invest in the infrastructure which will protect us from the worst impacts of the climate emergency and cut our carbon emissions.

“The terrible flooding this winter has given us a glimpse what the future looks like. It’s time the Government stopped pulling the wool over people’s eyes about past achievements and takes the action needed to address the climate emergency.

London’s Labour Party also welcomed the decision. Mayor Sadiq Khan called it a “major victory for all Londoners who are passionate about tackling the climate emergency and cleaning up our air”.

Labour’s London Assembly Transport Spokesperson, Navin Shah AM, added: “In the midst of a climate emergency, it would have been nonsensical to proceed with plans to build a third runway. This would have grossly exacerbated air and noise pollution in the capital, setting back the significant progress that City Hall has made on tackling these issues.

“This a huge victory for Londoners, brought about the tenacious opposition of the Mayor, the London Assembly, local authorities and campaign groups.

“It is vital that the Government reminds itself again of the commitments it signed up to in the Paris climate agreement and swiftly throws its plans for Heathrow onto the scrapheap”.

“I am delighted that the Court of Appeal have made this decision. Building a third runway at Heathrow would make it almost impossible for the UK to achieve net-zero.

“The Prime Minister once pledged to ‘lie down’ in front of the bulldozers – well he doesn’t even need to do that. If the Conservatives are serious about taking the climate emergency, they should simply cancel Heathrow expansion once and for all.”

“Liberal Democrats have always opposed Heathrow expansion and will continue to hold the government to account on their climate change commitments.”

The union representing London’s airport staff though was dissapointed by the ruling. Its London regional secretary Warren Kenny said:

“This decision is a direct result of Parliament and Government making climate change laws on the hoof without proper consideration of the true costs of achieving net zero carbon emissions by 2050.

Parliament urgently needs to revisit the costs of the net zero carbon emissions and alternatives to turning the clock back on what sustains the prosperity of citizens.

“In particular, Parliament and government need to go back and change the laws to focus on cutting carbon emissions by the industry rather than cutting the ability of passengers to travel by air.”

“The Aviation industry says that there is an alternative. The law should reflect this. Air travel has played a fundamental role in creating our contemporary networked world and restricting connectivity is a very backward step for humanity.”

“So if this decision stands it is a very backward step for the population of London expected to grow to eleven million people by 2040. It will be negative for the economy of the entire country.”

“There is no positive way of presenting this unwelcome decision. Unless the law is changed it will lead to an unwelcome rationing of air travel by a general strategy of pricing of it out of reach of ordinary people. It will be available only to those with way above average incomes.”

“On the alternative frequent flyer tax it is very difficult to see it how could be operated without the introduction of a central government held data base containing the details of each and every flights taken by all citizens. This would be a very “big big brother” step to take – particularly if there are viable other alternatives to avoid such a drastic step.”

“GMB is disappointed by today’s court ruling. Heathrow expansion is a complicated issue, but we have consistently backed it because the benefits more than outweigh any risks.

“Expansion would protect the existing 80,000 jobs, create a further 114,000 – as well as 10,000 apprenticeships. Like everyone else, GMB members are very worried about climate change, but we would have held Heathrow Airport Ltd’s feet to the fire on their target for zero carbon by the mid-2030s.”

“The Government must now come up with a proper aviation strategy for the UK – and unions must be front and centre in those discussions.”