Asking difficult questions is not a criminal offence. But the criminalisation of protest continues, writes Symon Hill. 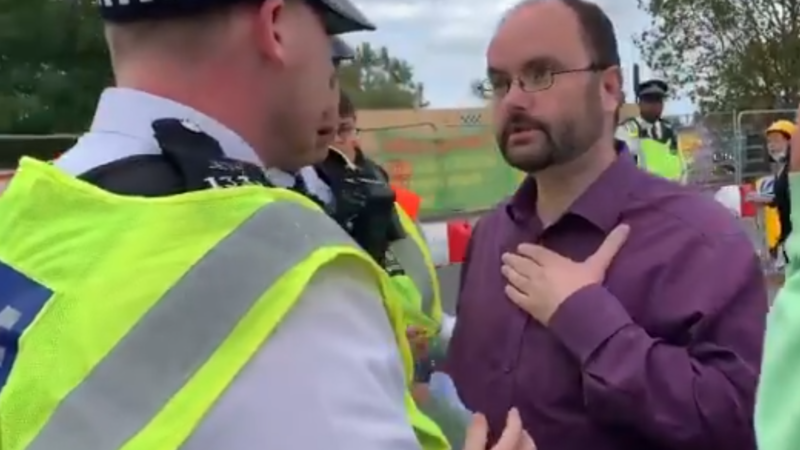 On Thursday, after five months of proceedings by police and prosecutors, the Crown Prosecution Service dropped a charge against me, just as I was about to stand trial in London.

I was arrested on the sixth day of protests ahead of the arms fair in east London last September. Hundreds of people took part in action to resist the setting up of the fair, euphemistically named Defence & Security Equipment International (DSEI).

Representatives of despotic regimes such as Saudi Arabia and Bahrain, as well as the world’s biggest militaries – such as the USA – were in attendance. This government-backed event is subsidised with taxpayers’ money and includes UK armed forces. The police are deployed to protect it from peaceful protesters.

I returned from the tea and coffee area at the protest camp to find that dozens of people had sat in the road while I had been away for a few minutes. Such blockades happened regularly during the week. Other people remained on pavements and grass verges, waving banners and chanting. The police parked a van across the road to try to stop other people joining the blockaders.

I stepped into the road to express support to people who were sitting down. Several police officers approached me and others who had stepped off the pavement at that point.

The first person to be pushed back by the police was, predictably, the only person in that part of the road who was not white. They got to me just afterwards. I asked why they wanted me to leave the road, which was already obstructed by dozens of people before my arrival, not to mention a police van. They said it was for my own safety and that there might be “unlawful violence”. The only violence all week had been the violence inherent in the arms fair and the behaviour of the police.

But the police accused me of causing a “breach of the peace”.

I told them I was seeking to promote peace by stopping an arms fair. I asked them to explain what they thought that “peace” meant. One of them responded, “I’m not going to explain it to you.”

This is simply not an adequate response from a police officer who is being asked to clarify the law under which he is issuing an instruction to someone exercising their right to freedom of assembly.

Not for the first time, the police seemed to be confusing peace with order. Peace is not the absence of conflict. Pacifists engage in nonviolent conflict to resist war and militarism.

Eventually, one policeman appeared to lose his temper, put handcuffs on me and arrested me for “wilful obstruction of the highway”.

I was formally charged with this offence when I was released from custody late that evening. I entered a Not Guilty plea at court in October and was told to come back in December, only to have the case postponed because the arresting officer was on holiday. In January I asked for another postponement because my mother had just died, and was required to go to court to make this request in person.

Throughout all this the Crown Prosecution Service insisted on pursuing the case, submitting papers to the court until a few days ago. I was very lucky to have the support of friends and comrades, excellent lawyers at Bindman’s and a great barrister. Earlier this week, my barrister, Leila Mezoughi, made a written submission pointing out that the road was already obstructed when I entered it, including by a police van. A few minutes before my trial was due to begin yesterday, the prosecutor approached my lawyers and told them they were dropping the charge.

I am looking into the possibility of a complaint or claim against the police. I was not obstructing the highway: it was already blocked. It seems I was arrested because my questions annoyed the police.

I have been lucky. Not everyone has the same support from friends, comrades and lawyers. That’s all the more reason why I cannot let the matter drop.

As a society, we must not tolerate a situation in which police arrest people who ask them difficult questions.

Symon Hill is Campaigns Manager of the Peace Pledge Union and a history tutor for the Workers’ Educational Association. Watch the video of his arrest here.