“These are desperate times and we plead with government and corporations to cease fossil fuel extraction immediately." 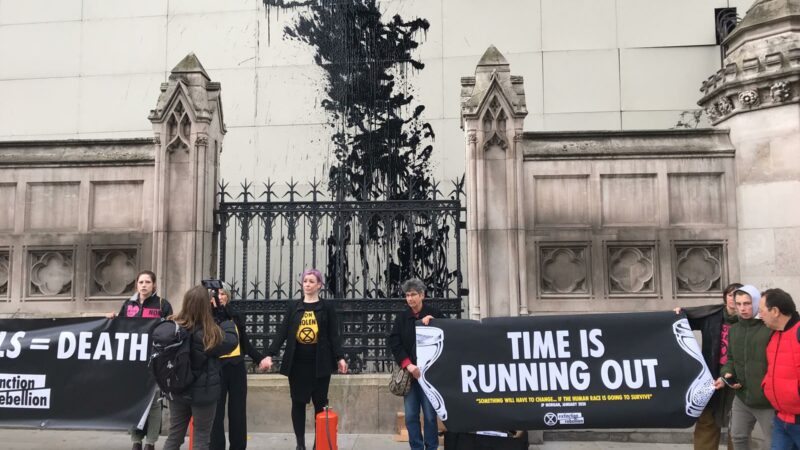 Climate activists have sprayed the facade around Big Ben with fake ‘oil’ in a new wave of protest.

It marks the start of ’40 Days of Action for Lent’, launched this Ash Wednesday morning with acts of nonviolent civil disobedience carried out by affinity groups in Durham, Northampton and London.

The day will see fresh action with services outside Westminster Cathedral and Westminster Abbey and the beginning of a non-stop 40-day multifaith prayer and meditation vigil on Parliament Square.

Other activists swiftly arrived on the scene to unfurl a banner again reading “Fossil fuels = death” and a second reading ‘“Time is running out – something will have to change if the human race is going to survive” – JP Morgan, January 2020’, a reference to a recent eye-opening report from the world’s largest financier of fossil fuels.

Once the fire extinguishers were fully emptied, the two activists placed them on the ground to wait for the police. As soon as they arrived, the women told them that the action was a peaceful protest using a safe, nontoxic liquid and handed them a recipe sheet detailing the ingredients for the fake oil.

The action was livestreamed to the Extinction Rebellion Facebook page and can be watched here.

Extinction Rebellion argue that beyond Parliament’s declaration of a Climate and Environmental Emergency, there has been ‘no meaningful progress’ in lowering the UK’s carbon emissions. The activists are demanding that the UK government commit to abandoning dirty fuels in favour of renewables, cancelling all investments and subsidies in the fossil fuels ‘which threaten to kill us all’.

Gail Thomas, one of the activists who sprayed the Elizabeth Tower, said: “These are desperate times and we plead with government and corporations to cease fossil fuel extraction immediately. Unlike real oil, the black substance used in this art installation is plant based and harmless to this building, people and planet. It’s beyond shocking that over a month ago, JP Morgan – a major industrial financier acknowledged that the human race is heading for extinction, and yet, no change has ensued, it’s just business as usual and it has to stop.”

Protester Alice Lynch added: “Our house is on fire, it’s time to Act Now to put the fire out. The repurposed fire extinguishers are beautifully symbolic when you think about it. This is a Climate and Ecological Emergency and enough is enough. People are already suffering and I don’t want my children to suffer as well. We don’t want to be here doing this but feel that we have no choice. I hope that our artful approach draws attention to the urgency of the situation.”

“The Parliamentary authorities work closely with the Metropolitan Police Service to investigate any incidents on the parliamentary estate. We are not able to comment on operational security and policing matters.”

There were similar fake oil protests outside Barclaycard HQ in Northampton. Wednesday also marks the start of a three-day blockade of the Bradley open-cast coal mine in the Pont Valley, County Durham.

It comes after the launch of a new Extinction Rebellion strategy, which moves the organisation’s focus from mass city shutdowns to more targeted actions and stunts directed at major polluters.