Freedom of Information response claims department has no analysis of payment delays, despite a 2019 admission by the then secretary of state. 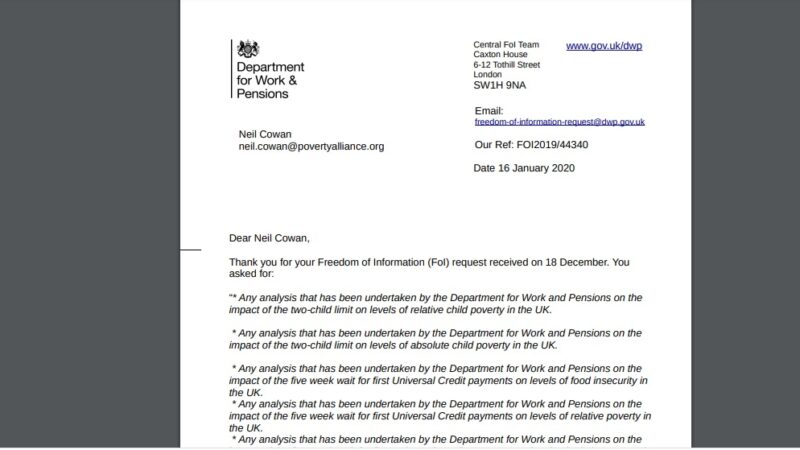 The Department of Work and Pensions has failed to analyse the impact of the five-week wait for Universal Credit, a Freedom of Information request has revealed.

Neil Cowan, policy and parliamentary officer at the Poverty Alliance, requested detail from the Department on the levels of poverty, destitution or “food insecurity” suffered by claimants forced to wait five weeks for their first payment.

But the Department of Work and Pensions responded saying that it does not hold any such analysis on the five-week wait.

This is despite being required to hold the personal data of claimants, their benefits records, and details of any payments made.

Peter Kelly, director of the Poverty Alliance, said that there is abundant evidence that the five-week wait drives destitution and distress. It has pulled countless people into poverty and trapped many more who were already struggling.

“We hear time and again that the policy is pushing some people into rent arrears while others are going hungry to avoid getting into debt,” he said.

He pointed out that Amber Rudd, the then Secretary of State for Work and Pensions, admitted almost a year ago that delays in paying Universal Credit could be responsible for rising food bank use.

The Joseph Rowntree Foundation has estimated that two in five families on Universal Credit cannot meet their basic living costs during the five-week wait.

Research by the Trussell Trust has shown that in areas where Universal Credit has been rolled out for at least a year, food banks have seen a 30% increase in demand — jumping to 48% after two years.

Garry Lemon, director of policy, research and external affairs at the Trussell Trust, said that it’s now clear that five weeks is too long to make people wait.

“We must change that design. The Conservative manifesto pledged to do more to make sure Universal Credit works for the most vulnerable,” he said.

The Poverty Alliance’s Cowan also requested information from the Department of Work and Pensions on the effect of the two-child limit. But the department refused, saying disclosing this information might threaten its ability to formulate policy.

“Good government depends on good decision-making and this needs to be based on the best advice available and a full consideration of all the options without fear of premature disclosure,” it said in its formal response to the Poverty Alliance.

“If this public interest cannot be protected there is a risk that decision-making will become poorer and will be recorded inadequately.”

Neil Gray MP, shadow Work and Pensions secretary for the Scottish National Party (SNP), urged Westminster to release its analysis on the impact of the two-child policy. Failing to disclose such information was “scandalous”, he said.

“It’s clear that the Tory government couldn’t care less about the devastating impact its austerity policies are having on millions of families, with soaring levels of poverty, food insecurity, and destitution,” he said.

“Tory ministers must also explain whether and why they really have done no analysis of the five-week wait for Universal Credit.”