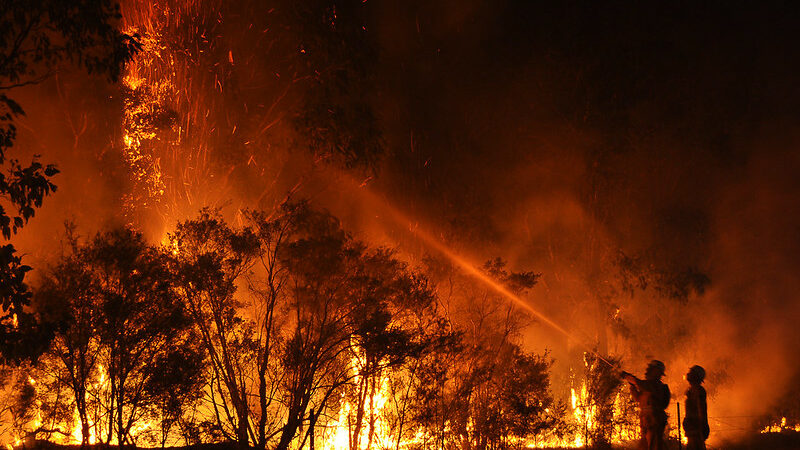 Australia’s trade unions – led by the Australian Council of Trade Unions and business organisations – have called on the country’s ‘hapless’ Liberal government to overhaul its bushfire relief package.

Unions say $40 a day is not enough to help the victims of the bushfires – and there are major criticisms over exclusions the government have built into the the package, affecting volunteer firefighters among others.

Employers organisations have joined the ACTU in demanding that all affected workers, sole traders, and firefighters receive proper compensation. Under the current relief package, volunteer firefighters – who take time off work to fight the blazes – can only claim relief funding after more than ten days off work.

The ACTU has been highly visible and vocal in criticising Liberal PM Scott Morrison for his mishandling of the crisis, and his seeming indifference to the catastrophe now unfolding in Australia – including leaving the country to go on holiday to Hawaii and playing cricket with his family as the fires raged across some states. This culminated in his visits to fire ravaged communities where residents abused and heckled him as he walked away when they refused to shake his hand.

Dubbed ‘Scotty From Marketing’ because of his use of media coverage of the fires to promote the right wing policies of the Liberal Party, the ACTU’s Liam O’Brien wrote to Morrison saying: “Given the unprecedented scale of this crisis a more substantial level of income support is urgently needed.”

The ACTU wants the Disaster Recovery Allowance, available to some fire-affected workers, farmers and sole traders for 13 weeks, to be increased to the national minimum wage ‘as an urgent and interim measure’ and be extended to all those impacted.

O’Brien said the disaster recovery allowance is available only to those who lost income ‘as a direct result’ of the fires, and should be extended to those who suffered impacts such as being unable to travel to work if their car was damaged or roads were blocked due to fire.

Peter Strong, the CEO of the Council of Small Business Organisations Australia, threw his support behind the ACTU proposal, saying if workers who had lost their income did not receive adequate support, they would leave town – meaning small business employers would have to train someone new when normal operations resumed.

Australian Industry Group CEO Innes Willox said ‘all options should be on the table’ in responding to the bushfire crisis, which has had ‘a devastating economic and social impact’ that would be felt for years. “Getting cash into hands to stimulate economic activity has to be a priority,” he said.

People who work casual or part-time jobs should receive a pro-rata payment based on the hours they were likely to have worked, unions say.

The ACTU has called for ‘a comprehensive plan’ to support volunteer firefighters (known as ‘fireys’) , who are exhausted after fighting the fires for weeks on end. “The proposed one-off payment for firefighters will not provide the financial security that households and communities need given the size and scale of this bushfire crisis,” Mr O’Brien said.

In what is not seen as another inadequate response, a government spokesman declined to comment on the ACTU proposal for workers, saying bushfire victims were eligible for ‘a range’ of support payments. “The Morrison government is committed to supporting the communities and people affected by bushfires, as well as those brave Australians fighting them,” the spokesman said.

But unions have hit back hard, in true Australian fashion. One official in the Australian trade union movement said: “The government is unravelling. I can only hope the political consequences of this terrible event is the evisceration of this pack of mongrel Tories.”

Another told me: “Our firefighters are incredibly brave but they are exhausted. The tragedy is that we now have internal refugees who will need to be housed. Morrison has proved to be a vapid, inconsequential dimwit”.

Frances O’Grady, the head of the TUC in the UK, has written to the Australian union praising the work of the firefighters and emergency service workers. She has also extended heartfelt sympathy to workers who have lost everything in the fires, and condolences to the families and friends of those who have lost their lives The scale of the devastation includes the loss of over a billion animals.

The ACTU has now set up a Bushfires Crisis fund which can be found here. Donations can be made via Paypal.

Tony Burke sits on the TUC’s General Council, is Chair of the Campaign For Trade Union Freedom, and is Unite’s Assistant General Secretary. He is a Contributing Editor for Left Foot Forward.