Why the NHS crisis is an equality issue. 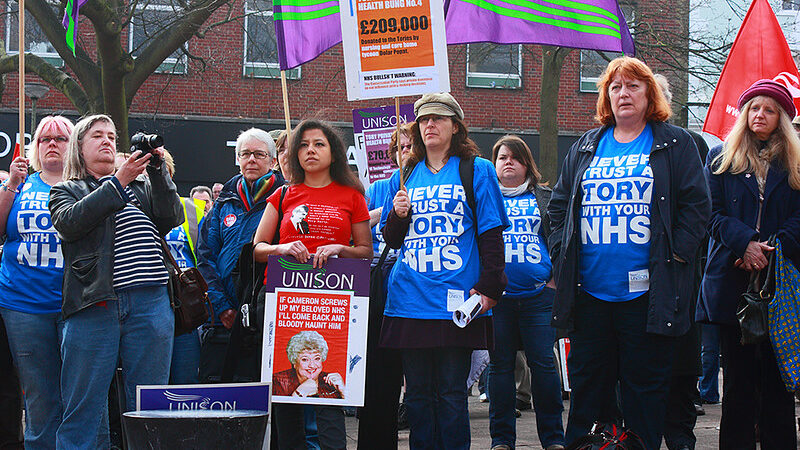 This was supposed to be ‘the Brexit election’ yet as we edge closer to 12 December, the NHS is increasingly the focus for parties and voters.

All parties have committed huge spending on the NHS, recognising its state of disrepair after a decade of austerity: the Lib Dems are promising to raise an extra £7 billion from 1p on every income tax bracket, while Labour is committing £30 billion of investment of the course of parliament and, the Conservatives are pledging £8 bn as part of the ‘most ambitious programme of investment in buildings and technology the NHS has ever seen.’

But rebuilding and sustaining the NHS is not only about the amount of money promised, important although that is. It is also about how this money is spent.

Buildings and technology are only part of what is needed; if they are full of overstretched, underpaid and stressed staff they will not be able to respond to the increasing demands of an aging population. 60-70% of NHS funding is spent on staffing and 77% of these staff are women. So, NHS spending, like so much else at this election becomes an issue of equality.

Women are more reliant on the NHS for care and employment because they live longer on average than men and are more likely to report long-standing illness. They also rely on the health service to take on unpaid care work and for employment. Admission to give birth is the single largest cause of admission to NHS hospitals.

Women’s health is so drastically impacted by the NHS that cuts to services have been used to explain why, in 2019, poor women’s life expectancy fell in comparison with poor men’s life expectancy. Staffing the NHS is vital to decrease waiting times and increase access to immediate care. Not surprisingly, therefore, women are significantly more likely than men to consider health policy to be an important issue at this election.

So, what are the parties pledging on staffing? All of them recognise to differing extents that a combination of the nursing bursary cut, overstretched and underpaid hours and the exodus of European staff has resulted in a health service that has more patients and fewer staff than ever.

The Conservatives promise to recruit more General Practitioners (GPs) and nurses and their commitment to reintroduce the nursing bursary – cut by 2010 – will surely help with this.

The Lib Dems have said they will also recruit more GPs and make use of technology to improve staff retention while Labour is promising more GPs to deliver an additional 27 million GP appointments a year and both these parties are pledging large amounts of this money to better mental health care in the NHS.

Healthcare also impacts on different groups of women differently. BME women are more likely to suffer limiting long term illness than white women. For migrant women, maternity care still counts as ‘surplus care’ and it can cost non-EU migrants up to £7000 to have a baby. which the Conservatives have said they will increase in line with an increase to the ‘Immigration Health Surcharge’ – which Labour have said they will scrap as part of an end to the ‘Hostile Environment.’

Tackling the crisis in the NHS also means addressing the even more severe crisis in social care. When people cannot get the care they need at home or in the community, they are far more likely to end up in a hospital bed.

Over 1.4 million people over 65 have unmet care needs. The majority of these people are women, as are the majority of those caring for them, paid and unpaid, which makes social care, like health, very much an issue for women at this election.

WBG research has shown how investment in social care would not only address the care crisis, it would have a positive impact on the economy, narrowing the gender employment gap by creating new jobs for women, and removing some of the burden of unpaid work that acts as a barrier for women in the labour market.

Labour has pledged to build a National Care Service in line with the NHS to stop this ‘whackamole’ politics as well as putting money back into Public Health which was cut by austerity.

The Lib Dems are also taking social care seriously, declaring in their manifesto that they are the only party with a ‘long term plan’ for an integrated health and social care system.

The Conservatives have made a welcome commitment to a cross party approach to social care. However, their manifesto contains little further detail except for the priority that ‘no one should have to sell their house to pay for care’.

Whoever wins the next election spending on the NHS is set to increase. The Women’s Budget Group would like to see a revived NHS with gender equality at the core. This means linking health and social care services and investing significantly in both.

Women are more likely to rely on the NHS for jobs and care so foregrounding our experiences would be better for everyone.

You can read our 2019 briefing on health and gender here.

3 Responses to “What are the parties saying when it comes to NHS funding? #GE2019”