Conservative efforts to take a Derbyshire seat have taken a desperate turn. 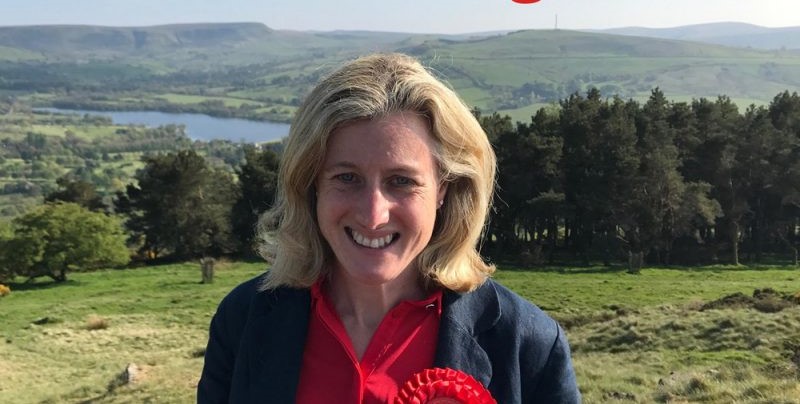 Conservative High Peak candidate Robert Largan might have described it as “one of the most marginal seats in the country,” but if the number of ‘Vote Labour’ signs firmly erected in gardens, driveways, windows, fields and other conspicuous places across the region are anything to go by, the outcome is looking pretty secure.

Since the 2017 general election, when Labour made gains up and down the country, Ruth George, who was among a series of Labour candidates to oust Tory MPs, has made a huge impact on the community. Known for her hard work, George has garnered support from constituents of all backgrounds and political persuasions.

Sadly, Ruth George’s attempt to consolidate the positive backing she has attained during her tenure as Derbyshire’s High Peak MP has been marred by accusations made by her Tory candidate rival, Robert Largan.

George had been informed by constituents of Largan visiting them at their homes and asserting that the Labour candidate is a racist. As George notes in her blog, the Tory candidate is making allegations without any evidence to back them up.

Rather than focusing on a positive campaign depicting how the Tories might improve the lives of the people living in the High Peak, Largan pounced on the only shred of criticism he could find on the well-liked Labour candidate, digging up tenuous links with alleged and unproven antisemitism.

And Largan’s timing couldn’t have been more finely executed. On November 25, Chief Rabbi Ephraim Mirvis, accused Corbyn of allowing a “poison sanctioned from the top” to take root in Labour, urging voters to consider Labour’s “inadequate” response to antisemitic contentions. Mirvis’ remarks led to widespread media attention that, once again, condemned Corbyn for his so-called failure to get a grip with purported racism against Jews within the party.

In a summary of the open letter from Ruth George, she describes such campaigning tactics as “abhorrent.”

“I find this an abhorrent way to go about campaigning to represent the people this area that I love so much. I will continue to run a positive campaign on my record of fighting for High Peak as I did for decades before I stood for Parliament.”

With a hint of well-deserved irony, the Tory’s crude tactics seem to be backfiring. As a High Peak resident commented in response to one of Largan’s posts attempting to belittle George:

“You are an absolute disgrace Largan and I say that as an ex-Conservative member. I was going to vote Lib Dem, but your conduct as forced me into voting Labour.”

“You have been parachuted into the High Peak and were councillor in hammersmith and Fulham from 2014 – 17, yet you come here to smear and throw mud at a fundamentally decent person.”

“Why haven’t you the decency to stage a positive campaign and highlight how you can make life better for the people of the High Peak!”

Rather than stooping to similar unscrupulous tactics as Largan, focused on demeaning her opponents, George announced she had agreed a joint statement with the Liberal Democrat and Green candidates, pledging that in the last two weeks of the general election campaign, they will continue to campaign positively and reman respectful to each other throughout.

Unprincipled and negative campaign Tory strategies are not isolated to the High Peak nor the 2019 general election. In 2005, the Tories took a chance on negative campaigning, with Michael Howard launching an unscrupulous attack on Tony Blair, which the then Labour leader shrugged off, hoping that Howard would himself be so discredited that his attack lines would not work. The tactics did of course backfire with Blair beating Howard in what was his third consecutive victory.

Today, the favourite line of attack against Labour is the allegations that so-called ‘rife’ antisemitism within the party are being dealt with inadequately, despite Corbyn repeatedly asserting there is “no place for antisemitism within Labour” and those guilty of anti-Jewish racism have been “brought to book.”

Sadly, unlike Blair’s Labour in the nineties and noughties, when the likes of the Sun endorsed ‘New Labour’, Corbyn has the majority of Fleet Street against him, with media coverage of the Labour leader characterised as being dogged by a “marked and persistent imbalance.”

The media are quick to pounce on claims of antisemitism within the party and less prepared to promote the Jewish fraternity who aren’t afraid to voice their support of Corbyn.

And candidates like Largan are quick to manipulate the ongoing antisemitism dispute for their own political gain. Their overused tactic seems to be backfiring.

[Ed: Earlier this year, Ruth George immediately apologised “wholeheartedly and unreservedly” for suggesting in a Facebook comment that Change UK could be funded by the state of Israel, as Jewish News reported].