Labour's Penrith and the Border candidate reveals a catalogue of errors. 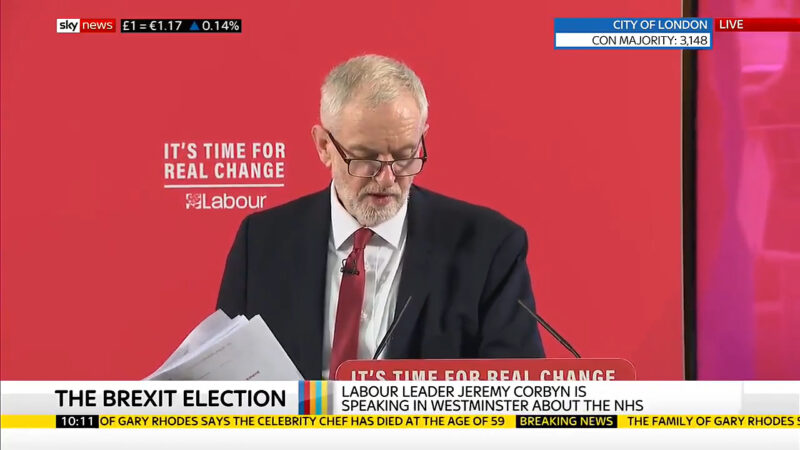 On 4 September, the Tory MP for Penrith and the Border Rory Stewart rebelled against Johnson and lost the whip. The same day, the Labour Party’s general secretary Jennie Formby sent out an email asking for members to put themselves forward to be parliamentary candidates.

I’m from a town called Wigton in Penrith and the Border. Its the largest constituency in England, spanning the lake district.

Its been Tory since its inception in 1950, with only one wobble. In 1983 Willie Whitelaw’s move to the Lords forced a by-election – annoying the local Tories – and the Liberals came within 500 votes of taking the constituency.

I thought the prospect of a popular independent conservative candidate plus a Johnson endorsed runner, may make for an interesting election.

I filled in my form and sent it off, apart from an email acknowledging receipt, I heard nothing more, until some two months later (5th Nov) I received a call from Labour North informing me that I’d been selected.

I was somewhat surprised and asked for time to think about it – I was given ‘a couple of hours’, as Labour’s National Executive Council were meeting in the morning and their endorsement was needed.

I spoke to family and friends – I knew there was no real chance of winning and that for the next 5 weeks I would be staying away from my home in London and back with my family in Wigton.

With my family’s support, I decided to accept the constituency labour party’s selection and became the parliamentary candidate. I was excited by the idea of the campaign and I looked forward to conversations on the doorstep and I thought I might give the arrogant Tory yes man Neil Hudson a bloody nose.

I had campaigned in the constituency in local elections where Wigton had managed to buck the national trend and increase their number of Labour councillors but, during that campaign, I had seen and heard just how angry voters felt about their Leave votes not being honoured and that they were being painted as ignorant or racist (or both).

Whilst this may, to some extent, actually be true (BNP HQ is in Wigton), there are many Leave voters who cannot be categorised in this way. During the local elections, I was able to reason with the Leavers that this was a local election, and they were mostly willing to engage.

The activists in the constituency are the most hard-working, honest, clever and caring group of people that I have ever met. But, what became apparent on the doorstep during my campaign is that there were a proportion of the electorate who would not engage. They were not willing to listen to any Labour message – they only wanted to ‘Get Brexit Done’.

It was difficult to judge the percentage of voters who fell into this category, those who were enchanted by a very simple but powerful message. The entire nation is sick of hearing about Brexit and the thought that it will be over and done with by the end of January is a very compelling one – a totally spurious falsehood of course, but still, just the thought that it might be and we can ‘Move On’ is a seriously difficult message to oppose.

Especially when we had a manifesto the size of a novel – at one of the Hustings I looked for our key message on the NHS, our strongest area and there was not one bullet point I could state to the audience, of course I know the NHS is safe with Labour, but how was I to explain this to the floating voter, what key message was I to give?

In the weeks running up to the election, each policy announcement felt more and more like we were at a panto and Aladdin was rubbing the magic lamp – I know our manifesto was costed blah blah but it came across as fantasy, it was written for the activist, for the members, for the politics students (perhaps even by them).

Most people aren’t that involved, they want to know the big picture the big offer – not the detail.

The short fallings of the Labour Party were epitomised when I went to meet the Labour bus in Carlisle (a neighbouring constituency) – Carlisle was considered a marginal so had glamorous visits from The Bus – no such attention was or is ever given to Penrith & the Border.

I heard about the visit so popped along. Ian Lavery was on the bus, he was with two young women whom he introduced to the frozen, windswept crowd – Lara McNeill, young labour representative on the NEC and Grace Blakely – described as economic commentator.

Lara went first and gave a long speech in a southern accent, reading from her iphone about what workers in the ‘north’ needed, followed by Grace, who did much the same. I was aghast, “a couple of posh birds telling us what to do” was one comment afterwards.

A huge and legitimate criticism of the Blair era is that we parachuted PPE grads into safe northern seats – David Milliband to South Shields, Mandelson to Hartlepool etc., the list is long.

This hasn’t changed in the Corbyn era, the power is all in London and is dominated by privately educated Oxbridge grads who’ve never lived or worked anywhere near the north of England, but nevertheless feel entitled to tell us what we ‘the workers’ need.

Lisa Nandy has been saying this for ages – she hasn’t been listened to. Unions must take responsibility for their role in the decline of Labour – far too much time is spent in conference echo chambers listening to each other, while workers continue to have precarious employment and little knowledge of unions and what they can and should be doing.

I have already read much comment on our Brexit position, even with the benefit of hindsight, there is no binary or simple ‘fix’, if we had kept to our 2017 position we would have lost seats in metropolitan areas.

We were in an impossible position – the PLP as divided as the nation. Small solice can be found in the fact that it is the Tories who will own the inevitable destructive mess that is to follow.

An extremely unpleasant aspect of the campaign was repeatedly having ‘Corbyn is a terrorist’ shouted at me – clearly this is not true, but plenty of people believe it. We can blame the media, but once this idea had traction, we really needed to act.

The lowest moment was when I went to neighbouring constituency Workington to help get out the vote on election day. Firstly, the sheets we had had data from 2010 – this is a key marginal and there isn’t data?

We were literally knocking on Tories’ doors and reminding them to vote. Second, on our way into a café for lunch, a man in his 40s, on seeing my 76 year old mother’s red rosette balled ‘fucking terrorist’ at her.

On the doorstep, Corbyn went down like a bucket of cold sick. I voted for him, I like him, the electorate do not – we needed to realise and act sooner – not by creating more factionalism and division, but by Corbyn himself backing a unity candidate to take over.

Things may have turned out differently had this happened sooner, it needs to happen now.

Sarah Williams is a Musicians Union and Labour activist. She came second in Penrith and the Border – 18,000 votes behind the Tories.

20 Responses to “London-centrism and a manifesto the size of a novel: a Labour candidate on what went wrong”