As the Greens launch their General Election campaign, Gina Dowding MEP shows what the party's Green New Deal could do for the North West and the UK. 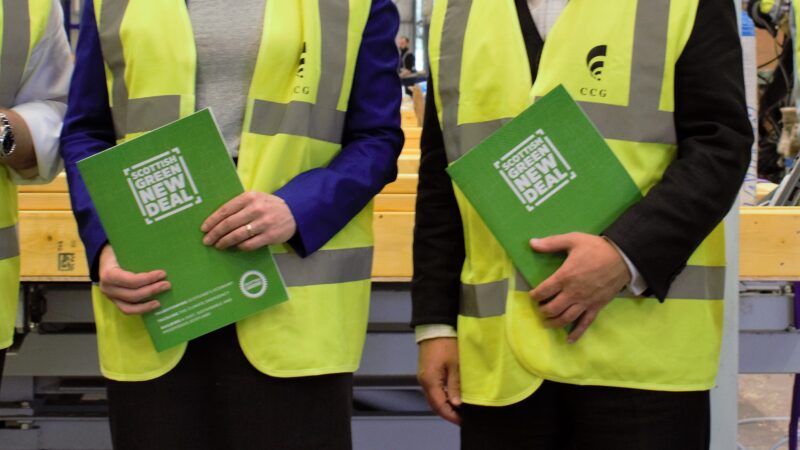 It is no secret that we’re in the midst of a climate and ecological crisis. Globally, people are demanding change. Young people are leading the call to prevent a catastrophic climate breakdown.

This election and beyond, we owe it to our children, our communities and the vulnerable in society, to do everything we can to fight to reduce carbon emissions and to restore, protect and enhance biodiversity.

The Green New Deal (GND) in the UK offers a clear vision of a brighter, sustainable future. It is radical approach to restructuring our economy which, if implemented comprehensively, will help us to transition rapidly out of the climate and ecological crisis and, at the same time, improve quality of life for everyone in the areas that really matter. UK-wide, it’s seen Greens and Labour figures work together to promote the idea.

Last week, I launched a report on a Green New Deal for the North West. The report outlines a positive and rapid transition to a smart, zero carbon energy, nature-friendly economy creating thousands of rewarding jobs – a true ‘Green Northern Powerhouse’. It focuses on five key areas: energy, industry, buildings, land and food, and transport. Let’s take a look.

Expensive new nuclear must not be supported over cheap, mature renewables. As I write, a very welcome moratorium on fracking has been announced. A pre-election sweetener maybe – but we will not rest until there is an outright ban on this dirty industry.

Workers in the fossil fuel, nuclear, car and road building industries need not fear for their jobs. The GND advocates a ‘just transition’, where workers will be re-trained and upskilled to work in Green industries or environmental restoration schemes.

The GND scales up both for onshore and offshore wind, solar and green hydrogen power with the capacity to create up to 46,000 jobs in Northern England alone in the next 10 years, and as many as 100,000 by 2050.

Increasing the energy efficiency of our buildings is the most obvious way of tackling both the climate emergency whilst delivering social justice for all. Fuel poverty is higher in the North West than anywhere else in the country.

Well-insulated, warm homes mean healthier, happier residents with less spending on public health. Upgrading our buildings in the region could create up to 35,000 skilled jobs by 2030 in renovation, construction and related sectors.

In terms of land use and food production, the UK is one of the most nature-depleted countries in the world. The North West has the lowest forest cover in the UK; our peat bogs are in poor condition and unprecedented flooding has occurred in recent years.

One scheme definitely worth supporting is The Northern Forest: a partnership between the Woodland Trust and local community forest organisations, with plans to plant 50 million trees across the North, from Liverpool to Hull.

Unlike the damaging deindustrialisation of the past, a GND offers new opportunities to revitalise our manufacturing communities by shifting to new, greener products and services. Energy intensive industry should be aided through the transition to zero carbon rather than pushed away.

One example includes Crystal Doors, a small Rochdale manufacturer, which has reduced its energy use by 75%: the reduction of carbon footprint underpins every aspect of the business.

For a just transition we need to spread research and development funding outside of London – which alongside the South East gets 10 times the public funding for R&D than the North West.

There can be no greener, fairer economy without expanding democratic forms of company ownership. Giving workers more input into the decisions that affect them is a key part of any just transition.

Co-operatives, community enterprises and employee-owned businesses are growing steadily in the UK as awareness increases of the societal damage pursuing profit above all else can cause. There are now at least 32 employee-owned firms in the North West, a number expected to rise quickly – over 60% of employee-owned companies nationally have made the switch in the last five years.

An overhaul of our inefficient transport system is essential to tackling the climate emergency: no airport expansion; frequent flyer levies; cheaper, greener public transport; and redesigning our streets for cycling and walking.

Our green vision for transport could create around 44,000 long term jobs in the North West – a total more than double the 17,000 jobs that could be lost in the maintenance of conventional fossil fuel-powered vehicles, leading to a net gain of 27,000 jobs.

Gina Dowding is the Green MEP for North West England. You can read about the Green New Deal for the North West here.