How immersive theatre can politicise audiences and open them up to complex decision making. 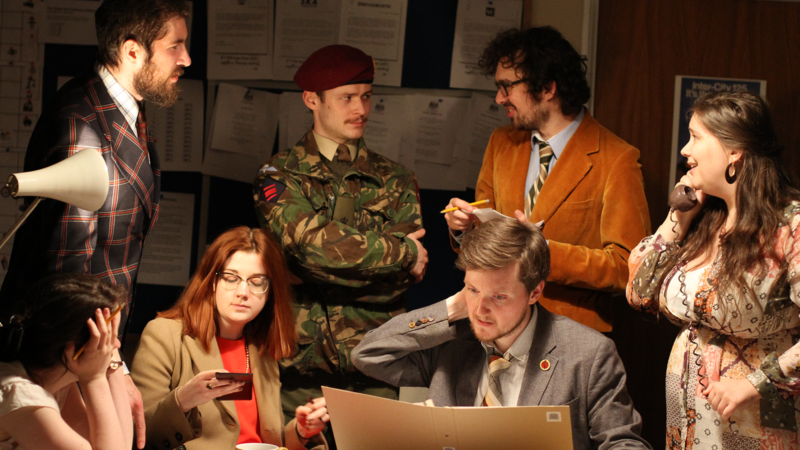 “I know I said you shouldn’t even give this to me because I won’t sign it, but I’ve changed my mind.”

The document in front of me was a neatly-typed death warrant for SS war criminals, and the person handing it to me was the Prime Minister. The date was 4th October 1940, and in light of Hitler’s decision to use gas in his assault on Gravesend, the Prime Minister had, as she said, changed her mind.

Of course, none of this really happened. Or did it?

The Wehrmacht never invaded Britain, much less used gas at Gravesend. The Prime Minister was an audience member, elected by her peers at the beginning of that night’s production of Parabolic Theatre’s For King & Country. In which I played a civil servant helping a makeshift wartime government.

But when she handed me that death warrant, the moral choice she made was real. Her journey from passionate opponent of the death penalty to disgusted avenger of her citizens was a genuine shift that had ramifications for the story my fellow actors and I told that night, and on the experience of fellow audience members.

For King & Country’s director, Owen Kingston, points out that 20th century theatre practitioners like Brecht and Boal found limited success with their attempts to engage audiences in real political thinking during plays, even during a period defined by extremes of political action. Even Boal’s forum theatre, encouraging critical intervention from the audience, never allowed them to fully enter the world of the show alongside the actors. The artificial barrier of the fourth wall between the two parties restricts the audience’s capacity for empathy. Only by removing it can you engage real change and create a fully immersive show where the audience’s meaningful choices range from a simple decision of who to work with up to explicitly political decisions about taxes, law and order, and war.

Only by giving an audience real choice do you give them real political power.

Exit Productions’ Eco Chambers takes the timely setting of an Extinction Rebellion-esque protest group and casts the audience as members. Then the members of the group are required to try to convince people who don’t already agree with them. A show where an audience may expect to be violently agreed with all night becomes an examination of the techniques we use to convince people who don’t, while questioning whether modern discourse prepares even the ‘politically active’ to do just that.

I’ve made my own first foray into making immersive theatre this year with a show called Crisis? What Crisis? a political simulation set during the Winter of Discontent. The audience are challenged to negotiate fair deals with trade unions that avoid strike action without driving up inflation (which, if it gets too high, will raise prices at the in-show bar). Different teams are assembled, each addressing different parts of the problem but all working together and impacting on the ongoing drama. Choices about a certain economic policy will drive down inflation and please the steelworkers, but a Labour MP upon whose vote the government is reliant will angrily abstain if the policy goes through. And that’s before the press gets involved.

The show first ran back in May, and all the ingredients, including our 1979 setting, added up to a bonding exercise for many audiences of perfect strangers. Both small-p political decisions about how they should organise themselves and big-p political decisions about what rate to set income tax became spirited debates about what would best help the situation and – crucially – what would be the right thing to do. There’s no more satisfying feeling for us as actors than watching audience debate among themselves whether they should carry out a plan that would help them in pure mechanical terms. The only snag is that often such a move feels like something your personal ethics won’t let you do. The resulting inner and outer conflict can only be described as politics – and theatre.

In Crisis? What Crisis?, the audience play the part of Labour Party advisers. But the ‘enemy’ is just as much the risk of chaos and societal collapse as it is the growing strength of Mrs Thatcher. Empowering audiences to see how much they can stabilise the country, and see their unique proposals incorporated into a show that’s shaped by their decisions in real time, creates a level of engagement with political issues that you wouldn’t get from a traditional play enjoyed from a comfortable seat and requiring no input from you to proceed. Once you realised that the show you’re watching tonight isn’t an on-rails tragedy that ends with that quote from Francis of Assissi on the steps of Number 10, and that instead you have a real power in the story to save the post-war consensus and avoid Thatcherism, wouldn’t you try?

In forty years, someone will make something just as magical about Brexit. But not before then, please.

Tom Black is an immersive theatre-maker and actor and has been a Labour member for more than a decade. His 1970s immersive political simulator Crisis? What Crisis? is running in London Bridge in November and December 2019.

3 Responses to “Tearing down the fourth wall”