Johnson's cowardice is developing into a problem for the Tories, says Natalie Bennett. 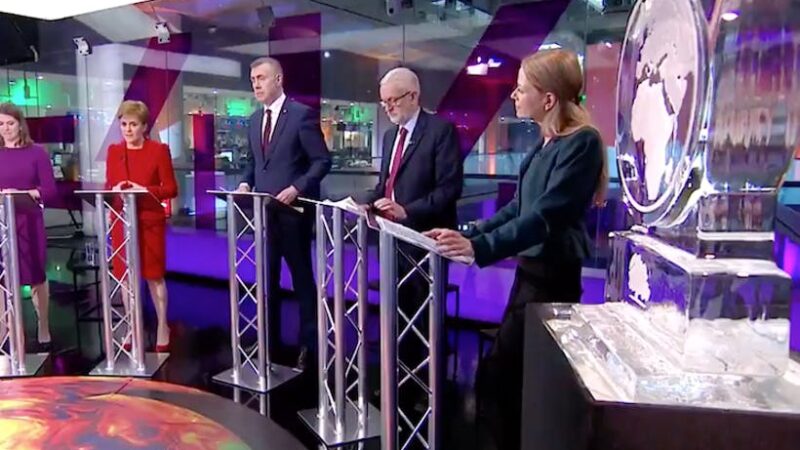 Boris Johnson failing to attend the Channel 4 climate debate last night is, on its own, sadly, unlikely to have much impact.

Any voter who is genuinely concerned about the climate and nature emergencies is highly unlikely to be considering voting for the Conservatives and specifically for Boris Johnson.

This is the man who hailed fracking as “glorious news for humanity”, who tried to fake the air pollution figures in London rather than tackle the deadly issue, who as late as 2015 was promoting the climate change-denying views of Piers Morgan.

But the hashtag “Boris the Coward” has been regularly trending on Twitter, and that isn’t just because of the climate debate, or the Andrew Neill interview, or Thursday night’s no show.

Throwing dead cats on the table, like Michael Gove‘s walk-on or the Tories’ fake fact-checking, isn’t proving as large a distraction as must have been hoped.

Acting like the Artful Dodger is clearly starting to do the Conservatives real damage, and not just to their leader – he’s setting the tone for the rest of them, and their whole campaign.

The Tories are ducking and diving, refusing to send representatives even to events that you’d normally expect them to attend.

The Overseas Development Institute hustings was a case in point. We got to listen to a Brexit Party representative stumble through their non-policy, but no Conservative, and it wasn’t even, as many were fearing, because they were about to drop to Cameron-era commitment of spending 0.7% of income on international development aid.

I’ve had two hustings that I was going to do next week cancelled because of a lack of Conservative reps.

And then of course there was the Tory non-manifesto, so empty of content that impartial observers were saying it would have been thin as a single year’s budget, that it would produce a Queen’s Speech (supposed to set out a new government’s plan for its term) of astonishing brevity, in a nation that’s so clearly in a state of economic, social, environmental, political and educational crisis.

The Tories are scarcely even trying to hide the fact that they are trying to do the opposite of Theresa May’s campaign of 2017: ensuring they provide the absolute minimum of policy and provide the minimum of appearances for criticism.

Increasingly, the Tory party campaign is reminding me of Ed Miliband’s Labour in 2015, trying so hard not to make a mistake, on the basis that if they didn’t, the keys to Number 10 would fall into their hand.

Yesterday’s YouGov poll does look awful for anyone who understands that in this climate emergency this coming parliament is the one that has to start transformatory action. It is horrifying for anyone who values the freedom of movement and thinks that young people shouldn’t have fewer freedoms and opportunities than their parents, anyone concerned about the completion of the takeover of our NHS by American multinationals and the loss of hard-won environmental and workers’ rights protections, all the threats of Brexit.

But this is not time for despair. The public are clearly noticing the paucity of actual content and substance in the Tory campaign and increasingly it is being called out. And how this comes from the top of the party. Hence “Boris the Coward”.

Standing on a platform of inaction, of vague nonsense like “get Brexit done”, may not be enough to see Boris Johnson fall back into Downing Street.

And if he is forced to face scrutiny and questioning, as he should in any system called democratic, we know how the public doesn’t like his empty bluster and bombast.

Tonight I’ll be at the Durham Union, debating “This House has no confidence in Boris Johnson”. Writing my speech has a couple of challenges.

The first is that the list of Johnson’s failures is so long I’ll need to cut it from ten hours to 10 minutes. But the second is perhaps more telling. Saying you should have no confidence in Boris Johnson like arguing you should believe in gravity, or photosynthesis.

Of course no one has confidence in Boris Johnson – that’s why his closest supporters and minders are trying to keep him out of public view.

7 Responses to ““Boris the Coward” – is this the narrative that will cost Johnson his job?”