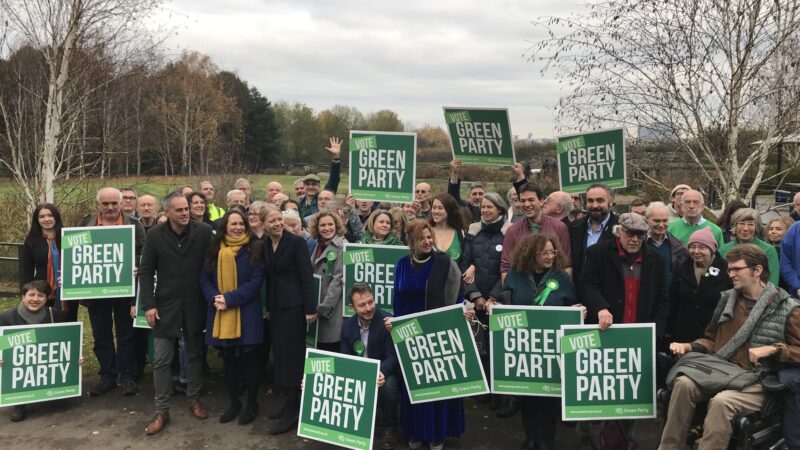 The Green Party launched their manifesto today, focussing on ten key bills which they promise to pursue in the next parliament.

These focussed on the areas you might expect – climate change, Brexit, housing, tuition fees, electoral refom and the NHS.

However, their actual manifesto had a lot of detailled policies in lots of areas. As co-leader Jonathan Bartley said in his manifesto launch speech, where the Greens start, the other parties soon follow.

Here’s 23 policies which caught my eye.

Much of the UK’s coastline is owned by the Crown Estate, which is the Queen’s public (rather than private) property.

The party wants to work with the Crown Estate to open up more coastal waters for offshore wind and marine energy and “ensure these vital energy assets come to the UK government rather than energy firms”.

The Greens want to connect our power supply more closely with Britain’s neighbours so we can import energy when needed and export it when we have a surplus.

The manifesto singled out subsea connections to Norway and Iceland – and their hydro and geothermal energy – for particular encouragement.

The party would spend £2.5bn a year building cycleways using sustainable materials – like woodchip and sawdust.

As well as ending the VAT exemption for domestic flights and introducing a frequent flyer levy.

The party hopes this would encourage more people to holiday in the UK and reduce carbon emissions from travel.

The party also says it would ban the practice of manufacturers making goods they know are going to break down in a few years time.

The party says it would “encourage the expansion and replanting of majority of hedgerows lost in the last 50 years through new subsidies, creating new environments for wildlife”.

This would reduce emissions from livestock. Measures would be taken to make sure farmers aren’t left worse off, they say.

9. Focus the EU in Brussels not Strasbourg

Currently, EU staff and operations are split between Brussels and Strasbourgh – a city 500 km away. The Greens call this “wasteful” and want everything moved to Brussels.

10. Reduce EU migration in the long-term

By “correcting imbalances caused by labour market inequalities across Europe”. To do this, the party want an EU-wide minimum wage and fiscal transfers through the Euro.

The party want to create a new government department to oversee the Green New Deal. This person would be the ‘Carbon Chancellor’ based in number 11 Downing Street – where the Chancellor of the Exchequer traditionally lives.

To end its “decades-long creation of a hostile environment”. The party would split the department in two – a ministry of sanctuary and an interior ministry.

The ministry of sanctuary would deal with immigration and the interior ministry with domestic security.

13. Rename the Ministry of Defence

They’d call it the ‘Ministry for Security and Peace’ and would make the promotion of peace a key foreign policy objective.

The Department of International Trade’s Defence and Security Organisation is a group of civil servants whose job is to promote arms sales.

Commercial exploitation of resources would be banned in these reserves and the rights of indigenous people protected.

For everyone 16 years and over.

Along with mineral extraction and road building.

To reintroduce nature to our urban environments. Other policies include bee corridors and street planting of native trees.

So children learn about animals, the environment and plants outdoors and learn to value nature.

Also, increase the police’s capacity to deal with domestic violence.

21. Pardon those convicted of possessing and supplying small amounts of drugs

And expunge their criminal records. Drugs would be legalised and drug addiction treated as a health issue not a crime.

So that adults can grow and smoke cannabis together.

23. Reduce VAT on pubs and bars

So that food and drink is cheaper. This would also apply to music concerts, theatre, museum and gallery tickets.

4 Responses to “23 eye-catching policies from the Green manifesto”