International e-commerce talks in Switzerland at the WTO are a chance to address inequalities, argues Laura Bannister. 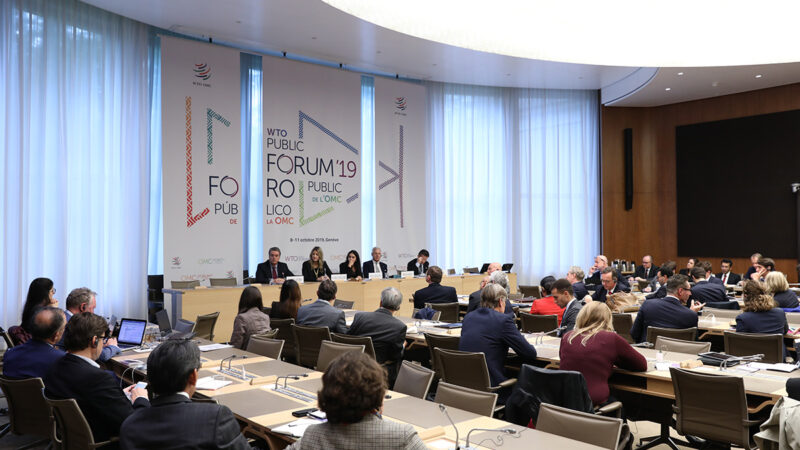 E-commerce negotiations have been high on the agenda for activists, civil servants and business people gathered at the World Trade Organisation (WTO) by Lake Geneva this October.

Platform companies like Google, Amazon and Uber were using the public forum to push governments to fix the new rules for the global digital economy in their favour.

UNISON and the Trade Justice Movement hosted a session with panellists from India, Uganda and Europe to explore the potential impacts on workers. Here’s what we discovered.

1. Digital trade rules could put your job, wages and rights at risk

The digitisation of work brings some advantages but many workers are losing out. Digital platforms are outcompeting brick-and-mortar businesses, causing a shift of workers from secure jobs into the gig economy. The International Labour Organisation (ILO) found this can lead to wages as low as $1.33 per hour, with some companies openly advocating rates for gig workers below minimum wage on their sites.

The digital trade (aka e-commerce) rules being written at the WTO and in other trade agreements look likely to make this worse. These ‘anti-rules’ will severely limit countries’ ability to regulate the digital economy or support the creation of local digital jobs. Meanwhile the e-commerce deal will grant tech companies major new ‘rights’ to penetrate markets, avoid local wage laws and worker protections, and treat their digitised HR processes as trade secrets known only to them.

Organisations resisting this process don’t aim to turn back the clock. Instead they want rules to manage the digital economy for workers’ benefit.

Georgios Altintzis of the International Trade Union Confederation (ITUC) asked: “Should we stop this digital innovation? No – quite the contrary. We should be free and unafraid in thinking about how we spread the value it generates.”

2. Data is the new wealth but workers are not getting their fair share

Data is, essentially, a raw material that people generate through their work, which tech companies capture and turn into high value insights and products. At the moment tech companies often take full ownership of this wealth, and can get extremely rich as a result: seven of the top ten companies by market value are tech firms.

Emerging digital trade rules would, we believe, cement this model in place. They mandate ‘free’ cross-border data flow and ban countries from requiring that data be processed locally. Localisation is likely to be a key precondition for declaring any kind of meaningful worker ownership over data or to support positive alternatives like digital data commons and platform co-ops, so the new e-commerce rules could have a major impact on worker-owner distributions of wealth.

3. It will probably be worse for women

The WTO’s e-commerce proposals are presented as a means of women’s empowerment. The dream is that women, especially in places the World Bank refers to as the ‘global South’ (by which it generally refers to low to middle income nations in Africa, Asia, Oceania, Latin America and the Caribbean), can run their own businesses and sell their own products directly via platforms like Amazon.

In reality they can often do this already, and women face barriers that will be entrenched rather than solved by the new digital trade rules.

Women-led enterprises tend to be small with thin price margins, according to Nandini Chami, from India-based organisation IT For Change. The commissions they must pay to these companies are often unaffordable. They also cannot usually qualify for high product search rankings (e.g. Amazon BuyBox) and other features that would make them visible to customers, Chami has said.

Digital trade rules are being written to lock in the advantages of these platform companies. They will secure their right to operate with no local presence, which means options like commission rate caps, intelligence sharing requirements and positive discrimination cannot be used to improve gender outcomes.

Winner-takes-all has become the distributional ethos of the digital economy, Chami has concluded, adding that the e-commerce proposals currently being mooted will entrench inequality for women.

4. It will probably also be worse for workers in the global South

On top of the ‘pink-washing’, the emerging digital trade agenda is presented as a key development initiative. Analysis by Martin Luther Munu, formerly of the Economic Policy Research Centre Uganda, suggests this is a grave misrepresentation.

Munu maintains that we need to examine the implications of the emerging digital trade rules on manufacturing jobs and retain the freedom to enhance the role of the state in digitisation in order to create high-quality jobs, while supporting the empowerment of workers in the gig economy.

Workers in developing countries are likely to be some of the biggest losers from current models of ‘data extractivism’. Their work produces insights and products that they often cannot afford to purchase, and that may ultimately put them out of work through automation. Munu explains that digital technology operates within the framework of increasing private ownership (capture). Instead, data flows across borders should be controlled and data’s economic value harnessed.

5. We can stop this but must act fast

The WTO’s e-commerce rules are being drafted at the time of writing. The 76 countries in the negotiations hope a deal will be drafted by June 2020. These rules are advocated most strongly by the US so are likely to crop up in any UK-US trade agreement too.

After Brexit, the UK must decide whether to join the WTO negotiations, and how to handle digital trade in future trade agreements. Understanding of this issue in political spaces is very low, and most political parties do not have established policy positions. This gives us a window through which to achieve a shift in direction.

If we can persuade the next UK government to take a more progressive route toward digitisation, this will be a huge blow to the WTO process. It is understood that many countries may be taking part only through a wish to be ‘at the table rather than on the menu’.

Therefore, the non-participation of a major post-industrial economy may sow doubt among participants and help scupper the negotiations.

Coupled with growing pressure from civil-society groups and unions worldwide, this could contribute to a major change. There is a real chance to block the creation of harmful digital trade rules. This would leave room to regulate for a worker-friendly digital economy that shares value and supports decent work.

Laura Bannister is a senior adviser at the Trade Justice Movement, a network of 60 civil-society organisations pushing for trade that works for people and the planet.

2 Responses to “WTO – no: 5 things every worker should know about digital trade”