"The stupid thing about our economy is the way we judge it – GDP. It makes no sense" Barry Gardiner told XR occupiers. 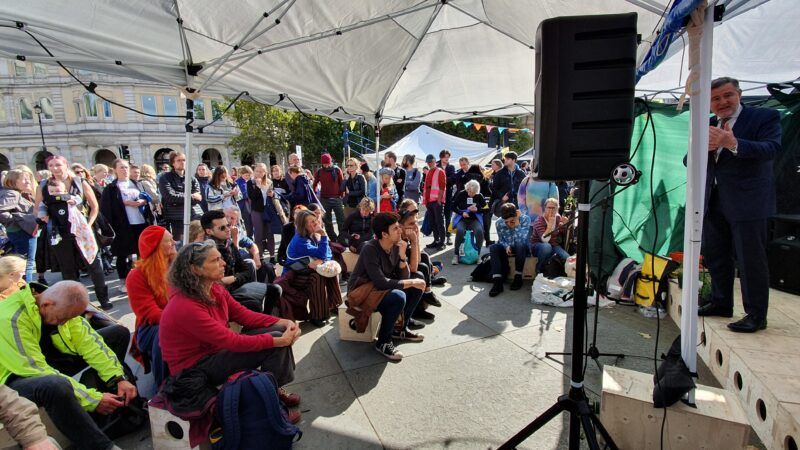 Labour’s Shadow Secretary of State for International Trade Barry Gardiner has told Extinction Rebellion protesters that his party are looking at a radically different approach to measuring the economy.

Speaking to the camp at Trafalgar Square – which remains occupied as part of a two-week ‘shutdown’ of central London – the MP suggested Labour would soon back an alternative to measuring the economy than Gross Domestic Product.

GDP – which measures all goods and services produced by a country in a year – has long been criticised by environmentalists for treating all forms of economic activity as positive. For example, when an earthquake hits and requires rebuilding, it boosts GDP.

Progressives and environmentalists have long argued for alternatives to be used such as Genuine Progress Indicator, which ‘takes GDP and corrects it for various social and environmental factors such as inequality, costs of underemployment and costs of pollution.’

In the US, the states of Maryland and Vermont officially report their GPI annually, but there is no global consensus on what alternative to use.

At a question and answer session, Gardiner told the crowd:

“The stupid thing about our economy is the way we judge it – GDP. It makes no sense…the wealth of the country lies in your legal system, your people, your resources, the skills available.

“Look at the floods last year – it boosted GDP and productivity…What we need is a completely different model.

He went on to say Labour are looking at alternative ways of measuring the economy:

“[Shadow Minister for Sustainable Economics] Clive Lewis is now in the shadow treasury team looking at the way we have natural capital valuation and how we regard wealth in our society and move away from GDP….that’s precisely what we’re trying to do there. We’re not properly understanding the value of nature and the environment. Economics is not simply about GDP.

“The model has to change – the UN started doing that 15 or 16 years ago by putting forward the system of environmental economic accounting. That comes live next year where the countries of the world have to put in those parallel systems of accounting.

“We have to transition to that understanding much more quickly, to enable 8.5 or 9 billion people to live sustainably on our planet.”

It appears to be the first time that Labour have suggested moving away from GDP as an economic measure.