GMB and Unite workers on site at Harland and Wolff in Belfast, which now looks to have a bright future after sale announcement. 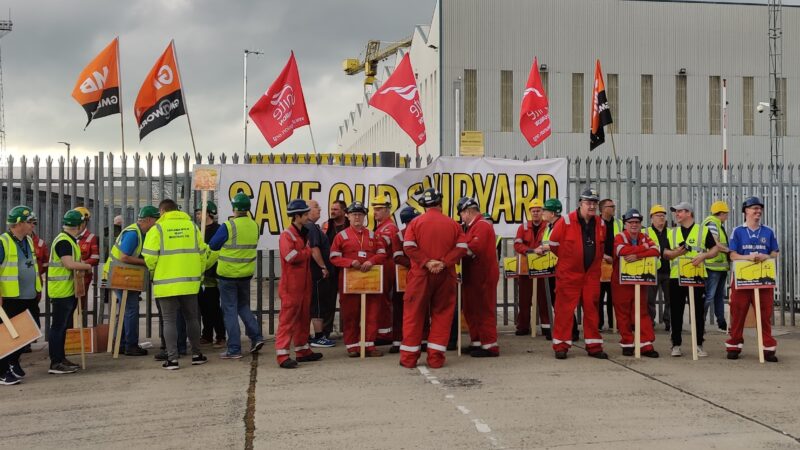 The shipyard that built the Titanic, Harland and Wolff in Belfast, has been rescued in a £6m deal after union workers refused to accept the closure, occupying the site for nine weeks.

Denise Walker, senior organiser at shipbuilding union GMB, told Left Foot Forward that the yard and its employees have a bright future in a range of heavy engineering industries, including renewables projects, even though the last ship built there was in 2003.

“There is a future for shipyards. For example, Harland is one of the largest dry docks, with two cranes Samson and Goliath, and there are no bridges across the lough, so really large structures can be floated in and out,” she said.

“They have innovated and they have the skills — they built jackets for wind turbines and also get involved in some of the innovative tidal and wave technologies, And that’s the work we want to see them go on doing.”

It is understood that yard expansion could soon be on the cards, with hundreds more jobs to be created by new owner InfraStrata.

Knowing the value of the yard and their own expertise, unionised staff refused to give in when the parent firm, Norway’s Dolphin Drilling, ran into difficulty. GMB and Unite workers ran a concerted campaign to raise awareness, including the round-the-clock sit-in — with administrator BDO working alongside.

If they had not done so, the yard would probably already be shut, Walker indicated.

“While politicians substituted sympathy for action, dedicated workers took control of the situation and of their workplace. This news proves they were absolutely correct in their assertions that this was a yard with a future,” she noted.

All 79 staff will keep their jobs, with maintenance and other routine work set to restart very soon. Around 53 employees took voluntary redundancy when it was offered earlier in 2019, according to GMB. At press-time, staff had not been paid for weeks, she said.

Accountancy firm BDO took over administration of the Northern Ireland shipyard on 8 August. Dolphin Drilling had been seeking a buyer since December 2018. GMB and Unite have now ensured the continuation of workers’ employment contracts through the administrator BDO, with workers expected to return to work in days.

The company’s employees are now set to be involved in works on new owner InfraStrata‘s proposed underground gas storage facility at Islandmagee in Co Antrim.

John Wood, CEO of InfraStrata, said its core priority is the flagship project in Islandmagee, but the opportunities are substantial “due to the diverse skill set at the facility”.

Steve Turner, head of manufacturing for Unite, said: “I always knew that this incredible workforce would fight for and win the future that this community wholeheartedly deserves. This is trade unionism at its best.”

The next few days will see the unions continue to meet with InfraStrata to secure a positive future.

Harland and Wolff at its height employed some 30,000 people. In 2019 it has been involved in maintenance for the Stena line, and is also part of the Babcock consortium to build the Type 31e frigate — which could represent at least six year’s work for the shipyard.

Both unions have also been campaigning for more steel, shipbuilding and related heavy engineering projects to be given to UK shipyards.

Government had refused to help save the facility, with DUP MP Gavin Robinson saying in August intervention would conflict with state-aid rules.

Robinson said Harland and Wolff had asked the government for shortfall funding of £650,000 for the month of August “so that they could explore other options”.

Shadow Chancellor John McDonnell has said that Labour would have nationalised the shipyard, with a view to future Navy contracts.