A legal case being heard in Scotland tomorrow could have huge implications, if the PM ignores the 'Safeguard Act'. Pictured: Jolyon Maugham QC. 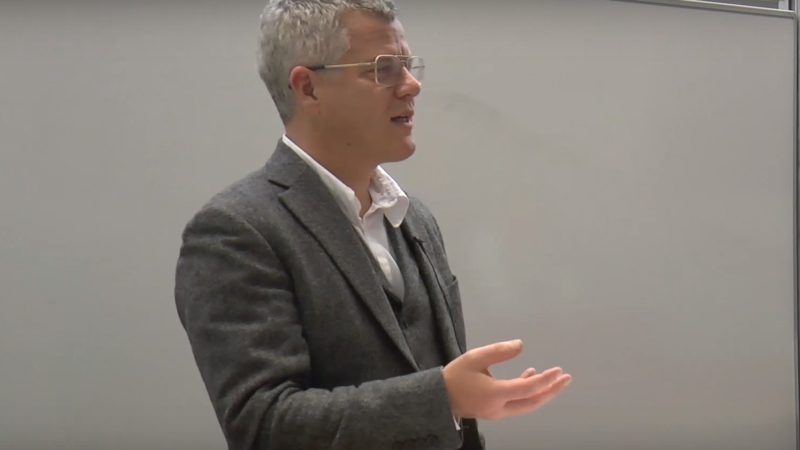 “We will be leaving on October 31st, deal or no deal,” said Boris Johnson today – apparently ignoring the fact that this would be against the law.

This is the backdrop to the legal case being heard this Friday. From 11am, a Scottish court will hear what could prove to be another monumental case in Britain’s constitutional history.

It is extraordinary that it has to be brought in the first place: the case will try and force the Prime Minister to obey the law.

Brought by the SNP’s Joanna Cherry QC, and Good Law Project director Jolyon Maugham QC, it will make the court consider what happens if the PM pursues a ‘no-deal’ Brexit against Parliament’s will. Both lawyers were part of the historic case that cancelled Johnson’s illegal prorogation of Parliament in September.

What is the basis of the court case?

The Safeguard Act (or Benn Act) effectively blocks ‘no deal’ if Parliament does not wish it to go ahead, by forcing the Prime Minister to ask for an extension. It’s very clear. And yet – Johnson has said he will neither ask for an extension nor break the law. If he can’t get his deal through, those two statements will directly contradict each other (unless, that is, he resigns).

There’s been all sorts of chatter about how he could dodge the law – from getting someone else to send it, to sending another letter contradicting the first one – but none of them hold much water, according to legal experts.

“My view is the act is watertight. The only opportunity for it to be avoided is if MPs allow him to avoid it: if the EU were to accept his proposals and MPs were to approve it, the Benn Act’s obligations on the PM would evaporate in a puff of smoke,” Jolyon Maugham QC tells Left Foot Forward.

And yet, no deal remains ‘extremely likely’. That is why campaigners are asking the Scottish court to order the PM to comply with the Benn Act – i.e. to send the letter to the EU asking for an extension if Parliament rejects his proposals.

If he won’t, the court will have to sign the letter on behalf of Johnson.

In other words, it “contemplates a world in which PM doesn’t comply with what he’s been told to do.” It is, according to Jolyon Maugham QC, “remarkable.”

‘Nobile officium’ – known to lawyers as ‘nob off’ is the court action that applies in circumstances in which an act has to be done by a person…but they won’t do it.

Maugham describes it like this: “You buy my house, I change my mind and refuse to transfer it. A court then orders me to do it, but I still don’t. So the court does it as if it were me.” In other words, the court will send the letter on the PM’s behalf if he refuses to do so.

Why is this going through the Scottish courts?

English courts don’t have nobile officium (‘nob off’, to lawyers) jurisdiction – i.e. the power to act on behalf of someone else. But if this goes up to the Supreme Court, the latter will have all the powers of the Scottish Court of Session.

Lady Hale could end up sending that letter on behalf of the PM. (We wonder what brooch she’d wear for that occasion…)

Could Johnson face sanctions or jail if he breaks the law?

“Yes. Judges take pretty seriously the obligation to comply with court orders…The purpose of the action in Scotland is to get the court to order him to comply, and if he doesn’t, then he will face criminal sanctions…[Even] to say you won’t comply with the law is itself an unlawful act,” Maugham says.

And the courts must act now, Cherry and Maugham will argue. “The timetable for compliance with the Benn Act is very tight…If they wait until there’s a breach [of the Act] to entertain court proceedings the consequences of that…may be to thwart Parliament’s intentions. Delay is as good as noncompliance,” he adds.

The case will be profoundly important. “The consequences of this order are irreversible. It’s a serious failure if he refuses to comply. It could include going to jail. I hope it doesn’t come to that,” Maugham says.

If he doesn’t comply, the PM would be in contempt of court. In this instance, the public authorities could act through the Crown Prosecution Service. If they didn’t act, you would expect private individuals to act. In England you can bring private proceedings to challenge contempt of court.

How confident can we be of success?

The Good Law Project director tells LFF he was confident – ‘bullish’ – about the prorogation case, as well as the original Gina Miller case which secured a Parliamentary vote on Article 50, and the Andy Whiteman MSP case last year on whether A50 could be revoked.

“This case is quite odd. The law is abundantly clear, and I suppose what’s making me nervous is a perception I have that the court would rather not have to do this, because of what’s being said about the independence of the judiciary and damage to rule of law,” Maugham says.

Could the government override the courts?

Several Tories and No 10 sources criticised ‘biased judges’ in the wake of the prorogation ruling – raising fears the PM might try and intervene or ‘pack out’ the court system.

“Senior members of the judiciary are very worried about the consequences….when judges uphold the rule of law,” Maugham tells me. “There’s all sorts of stuff being said about the Supreme Court and profound fears about what the case in Scotland will mean.”

Will there be another legal challenge to prorogation?

Johnson has announced Parliament will be prorogued again from next Tuesday – paving the way for a Queen’s Speech on 14th October, as previously planned.

Will campaigners challenge it? Maugham tells LFF the prorogation’s basis is ‘pretty ropy’. “I don’t think the real purpose is any different from first prorogation.”

However, the team are uneasy about “[putting] the courts under more pressure at the moment….I don’t want to confront the courts myself on that at a hotly contested political moment.”

The Benn Act case is set to move quickly: it could be heard for as little as three to four hours this Friday, and ‘done before the day is out.’

The Court of Session is then likely to make a decision on Monday. After that, the losing side is likely to appeal, meaning the case will then rapidly move up to the Supreme Court.

Get ready for another showdown.

3 Responses to “INTERVIEW: How Boris Johnson ‘could go to jail’ if he forces through no deal Brexit”