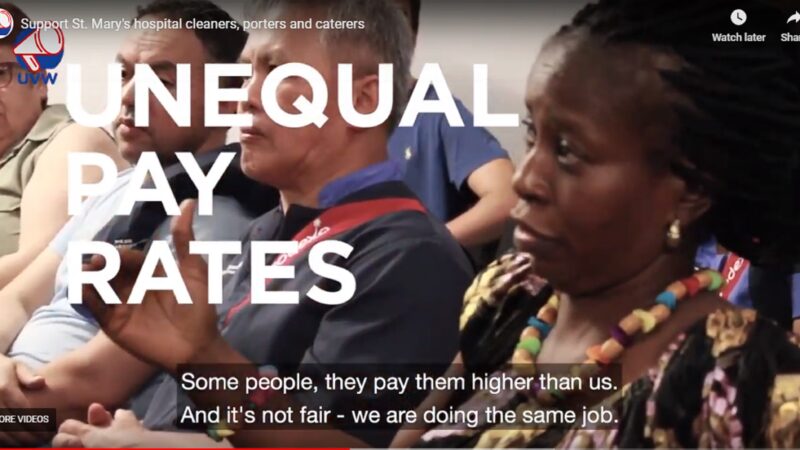 This October, United Voices of the World (UVW) is organising multiple ongoing strikes in London which will see our members enter into direct conflict with one of London’s biggest hospitals, the Ministry of Justice, University of Greenwich, St. George’s University, the University of East London, the Royal Parks, and ITV’s headquarters at 200 Gray’s Inn Road.

We are a campaigning trade union looking to move as quickly as possible towards direct and strike action to end to exploitation of our members — mostly migrants from Latin America, the Caribbean, Africa, Eastern Europe and, increasingly, Asia.

They work for some of the world’s biggest outsourcing companies, many of which make multimillion-pound profits from prestigious clients such as Sotheby’s, Chanel and The London School of Economics (LSE). But despite forming the backbone upon which these businesses and our public services rely, our members are treated as being no different to the dirt that they might clean.

All too often, we hear that members have been unfairly dismissed, denied the London Living Wage, or employed on the worst terms and conditions their bosses can legally offer.

By being bold in our demands and fearless in action on the street and in court, we have consistently beaten these outsourcing companies — and their clients.

With a few exceptions, the larger TUC-affiliated trade unions have failed to organise precarious, primarily migrant, workers who work in low-paid roles as cleaners, caterers and security guards. Hopefully, our successes — achieved on a shoestring budget — provide an example the TUC unions can follow in future, taking these disputes to the level they need and could in fact reach.

Our members have taken on the likes of the Daily Mail and the Bank of New York Mellon and won. And they have made history on more than one occasion, such as when they forced the LSE to become the first university to bring all outsourced staff back in-house, through what was then the largest cleaners strike in UK history.

Since then we have gone on to achieve complete equality for our members with in-house employees on several other occasions, as well as having had dozens of sacked workers reinstated, and had our members taken off poverty wages and given pay rises of more than 30%.

As important as these victories are, our work has only begun. There is still a large pool of low-paid migrant workers who remain unorganised and exploited by outsourcing companies and their clients.

Successful strikes not only improve the quality of life of our members, but they also send a message to these other workers that they can organise and improve their situation.

Outsourcing companies and their customers need to know that workers will no longer accept a business culture where shareholder value reigns supreme, where CEOs and executives enjoy obscene annual salaries and bonuses often directly funded by taxpayer’s money, while their staff struggle to survive on poverty wages.

That is why, this October, our largest strike will be at St. Mary’s Hospital, where over 170 cleaners and caterers outsourced by the hospital to the French multinational Sodexo will walk out to demand equality in pay, terms and conditions with their NHS colleagues.

Sodexo’s 2018 annual report stated an operating profit of 994 million euros; its former CEO, Michel Landel, was paid an annual bonus equivalent up to 200% of his €933,400 salary. Sodexo’s board directors enjoyed pay rises to the tune of millions of euros, rewarding themselves further with “performance shares” also worth millions.

Yet for the last five years Sodexo has paid our members poverty wages and given them some of the worst T&Cs out there. Our members earn only £6.16 to £8.21 per hour, leaving them £6,000-£10,000 worse off every year than NHS colleagues of a similar grade.

Every day our members strike they lose a days’ pay, meaning that a strong strike fund is essential to their success (and yes, donations are possible – via our home page).

Petros Elia is co-founder and organiser at United Voices of the World (UVW).

5 Responses to “Migrant workers are striking for their rights, and they need your support”