"When we’re suffering, you’re not alone. It’s not just you, it’s so many people that are part of this.” 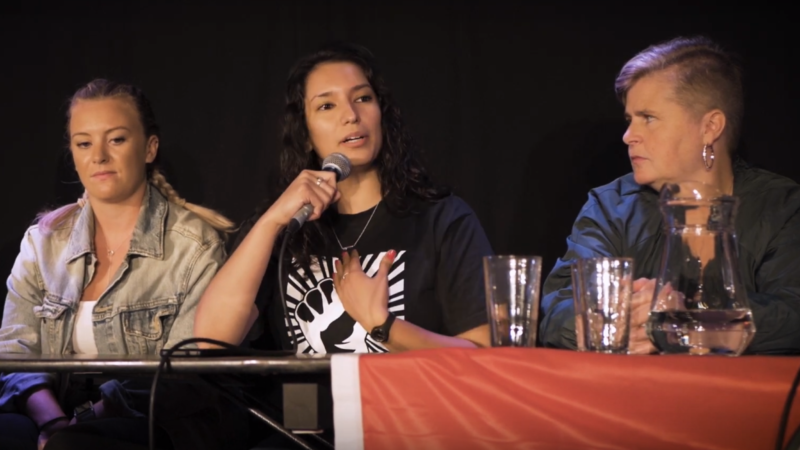 In 2014, Adriana Alvarez was earning around $9 dollars an hour. “It was a struggle” being mistreated on on the job, and frustrated with not being able to do anything with her two year old son (“I wasn’t even able to buy him a ball,” she tells me). The McDonald’s worker had had enough.

Having seen the ‘Fight for $15’ movement on the TV, Alvarez talked to an organiser – and got active. The Chicago worker is in the UK for The World Transformed – Momentum’s annual festival that takes place alongside Labour conference.

Speaking on a panel of other precarious workers, she’s sending solidarity to the growing ‘McStrike’ movement in the UK, which saw large walkouts late last year. It’s a movement of retail and hospitality staff from Wetherspoons, TGI Fridays, to Uber Eats and McDonald’s itself. And it’s winning: in January, McDonald’s announced pay rises in the UK.

What is unique is that the campaign is emerging from previously unorganised workers: young, precarious and in high-turnover industries. There are plenty of parallels in the US, despite the States having an even lower proportion of people in unions.

Speaking to Left Foot Forward, Alvarez – now a leader in the Fight for $15 movement – explains the context when she joined the campaign.

“If we got fake currency, they’d make you pay out of pocket”

“McDonald’s were doing a lot of illegal stuff in the store: making us work off the clock – if you had a cash register [role], you had to arrive 15 minutes early, but they wouldn’t let you punch in. Afterwards, you had to do the same thing. If we got fake currency, they’d make you pay out of pocket,” she alleges.

Both of those practices have now stopped, Alvarez says, after workers at her store protested. “It’s had a lot of impact on me in my life – I try and support my co-workers and people I see struggling. [Joining the movement] is a real eye-opener to how everything is run – we’re considered nothing to them.”

Most McDonald’s stores are franchises, and the company say “our people are at the heart of our business and, as a responsible and proud employer, we are committed to investing in them.” But the workers are committed to winning $15 an hour and union recognition.

It has been a consciousness-building exercise for Alvarez and thousands of other workers. “I see a lot of solidarity everywhere – not just in the states: look where I am! I came to realise: we’re not alone.

When we’re suffering, you’re not alone. It’s not just you, it’s so many people that are part of this.”

What is the scale of this movement in the US now? “We’re definitely winning – the US has seven states that are on their way to $15 an hour minimum wages, including Washington DC. In Illinois – my home state – I witnessed the bill being passed. 24 million people are on there way to a better living wage.”

It hasn’t been easy. “They’ve tried to push back and intimidate me. As long as you know you’re right, you can push back. I’ve lost count of how many times I’ve been on strike.”

One of the first times she went on strike, Alvarez had her hours cut. “I took legal action: we got our money back.”

Corporate execs are starting to listen. Amazon recently raised the minimum wage to $15. “A few months before Amazon announced it, we had a panel with Bernie Sanders, on how [CEO Jeff] Bezos and others were making huge wages.”

Her experience of the UK movement – led by the Bakers’ union – is ‘really similar to Fight for $15’ she says. “What they’re doing in the US I can pretty much guarantee they’re doing here.

“This is exactly why we need solidarity and to come together. They’re one big global company – and we need to knock them down as one.”

All of which is, of course, political at its core. I ask Alvarez what she makes of the conference.

“Corbyn sounds very good – I don’t know his background but he seems like a really positive thing.”

There’s no doubting that the Fight for $15 strikers have become a powerful political movement.

“We’ll have a really big role in the next election – we’re the voters and we need to make sure the next president keeps their word. Make them see we’re the working class and we’re struggling.”

Her message to young workers? “You need that voice to protect you. That’s how we got the 5 day work week, and holidays. We need to remember why we are where we are.

“We need unions for all – and we’re going to keep pushing until we win.”

2 Responses to “McStrike: How McDonald’s workers built a winning movement”