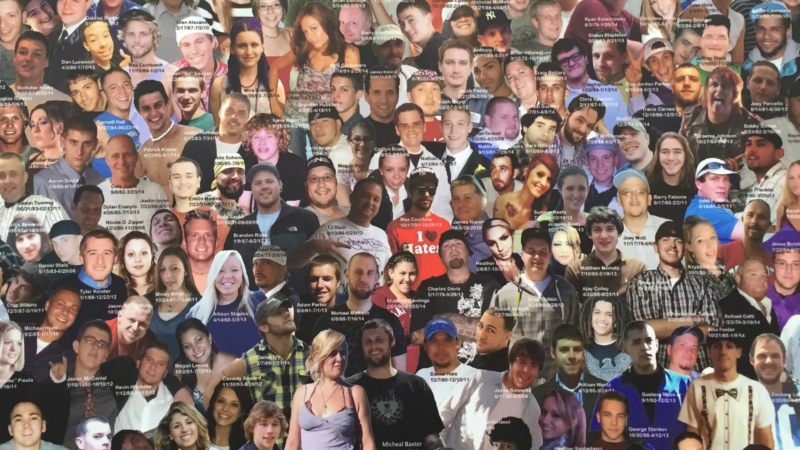 Pictured: Some of the many victims of drug-related deaths in recent years.

Drug related deaths are at an all-time high in England and Wales – and the government must be held responsible, reform campaigners argue.

There were 2,917 deaths related to illicit drugs in 2018 – and increase of 16% on the previous year. This means that about 40 people are now dying every week from illicit drug-related deaths in England and Wales.

It follows findings that the number of drug-related deaths in Scotland has also soared, to 1,187 last year, according to official figures. It’s an increase of 27% on the previous year, and the highest since records began in 1996. The findings in Scotland have sparked a national conversation about alternative approaches to the ‘war on drugs’.

Funding for drug treatment has been cut by an average of 27% across England, with the deepest cuts in areas with the most drug-related deaths. Cuts across the board hit older people particularly hard. Old people form a large proportion of the cohort at risk of drug-related deaths.

Portugal, which decriminalised the possession of drugs in 2001, saw just 51 drug-related deaths in 2017. This is about the same as the city of Bristol alone.

“The government is complicit in these deaths because it will not try the successful measures that work in other countries to reduce drug deaths and crime. Those of us in the Anyone’s Child campaign know about those measures – including legally regulating drugs. Why does the government ignore the evidence?

“Behind each figure in these latest statistics was a real person, a person who once had hopes and dreams – as did my two sons who were killed by illegal heroin – but they are treated as collateral damage in the government’s drug policies. I am so sad for all the families who are left in grief.”

“The increase in drug deaths to a new high is the inevitable result of year on year cuts to drug and youth services, and misguided Prohibitionist drug policies.  The UN called for evidence based drug policies in 2016. It’s high time our government responded to that call”.

“Each one represents a brother, sister, parent or friend who has left loved ones behind. After six years of record deaths, the government must act, with a clear focus on keeping people alive.

“Current policy is not protecting people or their communities; instead it is blocking measures we know can save lives, while decimating treatment funding. People dependent on drugs don’t die from overdoses in supervised drug consumption rooms or heroin prescribing clinics. We need these approaches to be supported and funded in the UK. We need better funded services, and an end to the criminalisation and stigmatisation of people who use drugs.

“Ultimately, we need to get drugs under control – and that means regulating them properly, rather than leaving the market in the hands of criminal gangs. Only then will we put an end to the health crisis unfolding around us.”

“This latest rise in drug deaths is further confirmation that our policy-makers do not have the best interests of people dependent on drugs in mind, or those of the communities around them. Unfortunately, the figures are as predictable and avoidable as they are tragic.

“The case for a more compassionate harm reduction approach has now been clear for years – and yet the government has continued to lead with tough rhetoric around law enforcement, all the while presiding over sustained cuts to local authority budgets, undermining their ability to deliver effective drug treatment services.

“There is now a growing consensus that criminal justice approaches to drug harm have failed, and that we must start treating drugs first and foremost as a health issue.”

In July, a group of 13 cross-party MPs and Peers, plus 7 Police and Crime Commissioners, sent a letter to Sajid Javid, urging him to end the Home Office’s policy of blocking the implementation of Drug Consumption Rooms – sometimes referred to as Overdose Prevention Centres.

The facilities provide people with drug addictions a safe place to consume their supply with sterilised equipment, and medical help and advice on hand. They have an international track record of reducing overdose deaths, and bringing more users in to contact with treatment services.

Several members of Johnson’s Cabinet have admitted using illegal drugs in the past.

5 Responses to “Ministers are responsible for surge in drug-related deaths, say campaigners”