It's the biggest parliamentary petition in British history. 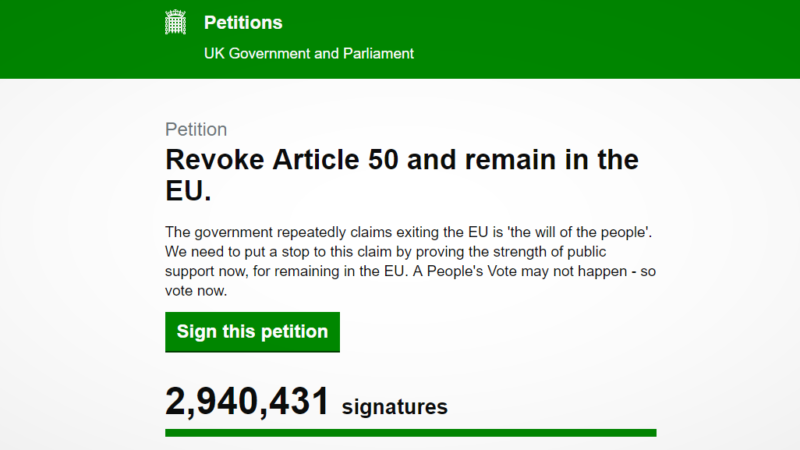 The Parliament e-petition to scrap Brexit and stay in the EU is now officially the largest in UK history, figures from a new House of Commons library briefing show.

We already knew that the largest online petition to the UK Parliament was ‘Revoke Article 50 and remain in the EU’, which garnered nearly 6.1 million signatures in early 2019 – equivalent to 13% of the UK Parliamentary electorate.

But a new Commons library report looks at the petitions presented to Parliament throughout history (that is, long before interwebs). Look what comes out top…

1. With 40 days to go, the petition to Revoke Article 50 and halt Brexit appears to be the largest in British history, with 6.1m signatures. It states: “The government repeatedly claims exiting the EU is ‘the will of the people’. We need to put a stop to this claim by proving the strength of public support now, for remaining in the EU. A People’s Vote may not happen – so vote now.” The government quickly rejected it – but it has emboldened the Remain campaign, after being signed by 13% of the UK electorate.

2. A petition presented in November 1945 on the behalf of the British Federation of Old Age Pensioners claimed to have been signed by ‘approximately’ 6 million people. The petitioners asked for legislation to improve the condition of pensioners. The number is equivalent to 18% of the UK Parliament electorate in 1945. However, the number of signatures was unverified, unlike the e-petition process.

3. An earlier pensions petition in July 1939 was signed by an estimated 5 million adults, calling for a doubling of the state pension to £1.29 This number was equivalent in size to around 16% of the 1935 UK Parliament electorate. The petition was collected over a 6-week period.

4. In December 1989, 4.5 million signed a petition in support of ambulance workers who were then a dispute with the government over pay. This number was equivalent in size to around 10% of the 1989 UK Parliament electorate. (The dispute was resolved with a pay increase in March 1990.)

5. Remember the 2016 petition to hold another public vote if the EU referendum result didn’t meet a certain threshold? It was signed by more than 4.1m people, equivalent to around 9% of the UK electorate in 2016. Where would we be if the government had listened?

6. A petition was presented to the House of Commons in November 1943, which was signed by nearly 4.1 million people. Petitioners called for an increase in the weekly allowances awarded to old age pensioners. 35 The number of subscribers were equivalent in size to just over 12% of the UK electorate.

The Commons Library point out that: “The presentation of petitions to Parliament has a long history, though before the Civil Wars of the 1640s petitions generally dealt with personal grievances. Since the later eighteenth century, radicals and reformers used petitions to make demands on parliamentary reform, the abolition of slavery, and religious toleration,” culminating in the mass-petitions of the Chartists in the 1830s and 1840s.

The Chartist petition of 1842 (calling for an extension of the franchise to all working men, among other demands) was signed by over three million people – at a time when the UK population was just 16 million. That would make it the largest in history by proportion of the population (a third of all UK adults at the time).

But the Revoke Article 50 petition now appears to have broken the UK record by number of signatories.

“People want us to change course”

“It is quite clear that the public are increasingly changing their mind on Brexit. As they see the detail and realise the disaster our proposed EU exit would be, they are rejecting it more and more.

“When the Labour party joined with the Tories to trigger Article 50 without a semblance of a plan, the direction of travel was set for a Brexit cliff edge. From the historic size of this petition, we can see that the people want us to change course. I hope MPs begin to listen.”

“It shows more and more people across the country are using their voice to warn that Brexit will hit jobs, devastate the NHS and weaken our position in the world.

“However, we have Johnson and Hunt ignoring the majority of the country by pandering to the right with dangerous talk of crashing the UK out of the EU. They should be reminded that over 37 times more people want Article 50 revoked than will vote in their contest.

“People deserve better. Liberal Democrats will not allow the UK to crash out of the EU. If that possibility comes close to becoming reality, we will argue for Brexit to be cancelled, by revoking Article 50.”

“It’s no surprise that this petition to stop Brexit has more support than any other parliamentary petition in history. People are sick and tired of being told this country has to go ahead with a project which is catastrophically failing.

“With it looking like Boris Johnson will be the next Prime Minister, chosen by a tiny fraction of the population, public anger will only grow. By threatening No Deal, he is putting a gun to the country’s head.

“That’s why next Saturday, 20 July, Best for Britain will be demonstrating against a damaging No Deal, and for a stronger Britain inside the EU.”

The Hansard Society survey of political engagement in 2018 estimated that 28% of the population had signed at least one e-petition in the previous year.