The art was inspired by Clare Short, Frances O'Grady and Satish Kumar. 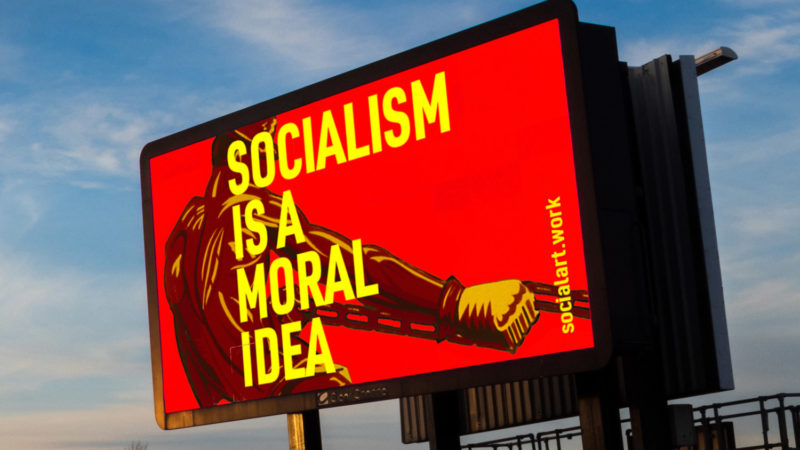 A series of artworks with socialist messages has gone up on digital billboards around the UK.

The art is displayed on billboards owned by the Clear Channel company – who say the art matches one of their values ‘fairness’.

Below are the billboards, along with Firrell’s explanations for them.

The words on the billboard above were said to the artist by Clare Short who added:

“It’s saying everyone’ important and the economy must be organised to include everybody.”

“Gorbachev said: “Peasants have always taken tomatoes to market”, meaning markets are not all evil. But monopolies are evil and distorted power and great inequality is evil.”

According to Clare Short, it is a mistake to link the moral content of socialism to any one system of social or economic organisation.

This artwork suggests that anyone who deliberately ignores or overlooks injustice becomes ethically implicated in that injustice.

The text of the billboard above is inspired by the book Non-Violence or Non-Existence – an introduction to Mahatma Gandhi’s ideology of non-violent society by the Indian activist Satish Kumar.

Kumar outlines Gandhi’s view that inequality is artificially created, whilst fairness operates naturally in the interests of all members of a society.

The union’s original banner declared its aims to be: ‘Secure Employment and Wage Justice with Greater Leisure in a Peaceful World.’

This contemporary artwork re-states those ideas as a reminder that secure employment and wage justice are still far from guaranteed.

For example, zero-hour contracts are becoming increasingly common in the UK.

Lil O’Callaghan was a union steward in the Transport and General Workers Union at the Ford car plant in Dagenham.

She urged the union to back strike action in support of 187 Ford sewing machinists, all women, who were demanding to be recognised as skilled workers and paid the same rate as their skilled male counterparts.

The actions of these women, their union, and Barbara Castle, Secretary of State for Employment, ultimately paved the way for the Equal Pay Act 1970.

This contemporary artwork re-states the call for equality for women workers. It acts as a reminder that there is still more to be done before full equality is a reality in all women’s lives.

The Miners’ Federation of Great Britain began representing the interests of British mine workers in 1889 (changing its name to the National Union of Mineworkers in 1944).

This contemporary artwork re-states some of those ideas as a reminder that it was Friendly Societies and the trade union movement that first made work safer, reduced working hours, and paved the way for the National Health Service.

﻿The text of this artwork is inspired by conversations between the artist and Frances O’Grady, the first woman to serve as General Secretary of the Trades Union Congress (TUC).

The union banner of the Pelton Colliery in Durham includes the words: ‘Progress, Education, Science, Art.’

This contemporary artwork re-states those ideas, reflecting the view shared by O’Grady and the artist that equal access to education and opportunity is essential for the progress of society as a whole.

The text of this artwork is again inspired by the book Non-Violence or Non-Existence – an introduction to Mahatma Gandhi’s ideology of non-violent society by the Indian activist Satish Kumar.

Satish Kumar summarises Gandhi’s belief that capitalism operates against the interests of society because it is inherently divisive.

He suggests that happiness is only to be found when social and economic organisation is based on cooperation.

In the first decade of the 21st Century, many commentators pointed to a lack of appetite for protest in Britain.

This artwork highlights protest’s significance as a guarantor of freedom. Otherwise, if nothing is contested, is freedom any longer present and actual?