"Rationing must be called out for what it is – privatisation driven by rationing," says John Puntis of Keep Our NHS Public. 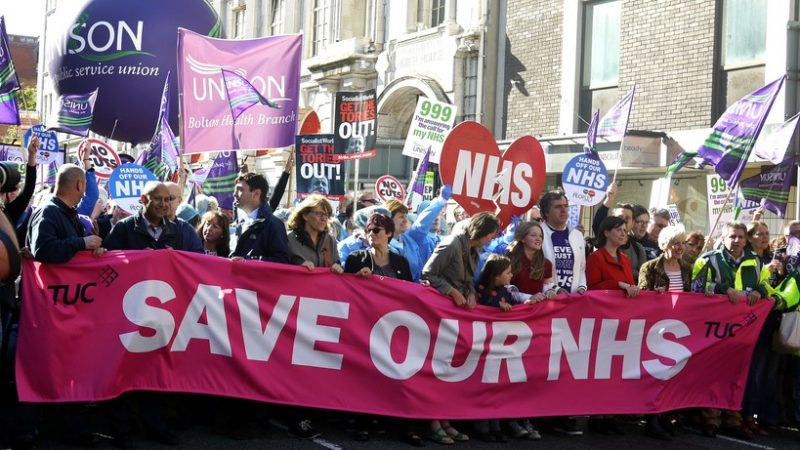 The government will never admit to privatising the NHS, and certainly not to charging patients for what many would consider essential treatment, but shockingly, through a combination of rationing and outsourcing, this is happening right now in front of our eyes.

For the past year individual Clinical Commissioning Groups (CCGs) have been rationing a whole range of much needed treatments, grouping 17 restricted procedures under the heading of ‘Procedures of Low Clinical Effectiveness’ but the fact that this is happening has slipped by under the radar for many who are currently unaffected.

At the same time, the Department of Health and Social Care and NHS England (NHSE) contradict themselves by insisting that the NHS will continue to offer a comprehensive service to patients, free at the point of use. The issue of “self-funding” patients now blows this claim wide open.

The menu of paid procedures at Warrington was called: ‘My Choice’ and promoted under the strap line – ‘My Choice is by the NHS, for the NHS’. CCGs are seeking to restrict treatments in order to adjust to a chronic shortage of resources.

Sustained government underfunding over the last 9 years, coupled with a clinical vacancy rate of over 50,000 means that the NHS is significantly short of both money and staff, and this is clear to most people.

Waiting times for elective surgery are now the longest they have ever been – with nearly 5 million people on the list, and Trusts are suffering record deficits.

It’s no surprise therefore that one response to this funding crisis is rationing of care, although this term is never used. The reality has not only been revealed by ‘My Choice’ but also by the numbers of exceptional funding requests, originally used to limit cosmetic and fertility treatment, but recently showing a massive increase for other interventions including hip and knee surgery, as CCGs try to limit patient access.

A cost of at least £7,000 for a new hip is beyond the reach of many of us, let alone elderly people on state pensions who have paid into the system all their lives.

This was never how the NHS was supposed to work. Dressing up procedures as ‘of low clinical effectiveness’ is an affront to the founding values of the NHS, and nothing short of a disgrace in the sixth richest world economy.

It’s revealing that NHSE appears unconcerned about the variation currently seen in how CCGs commission for surgical procedures such as highly cost-effective cataract surgery, where most CCGs are now flouting existing NICE guidance and restricting access for patients.

This system, introduced gradually, is intended to normalise the idea of paying for some treatment that is ‘no longer available on the NHS’. It is clear that Trusts are seeing this as a commercial opportunity, being encouraged as they are to become more business-like and increase their income from private work.

Warrington NHS trust may now have withdrawn their charging processes after a barrage of negative publicity but in the current climate it won’t be the only trust to try something like this. In asking patients to ‘self-fund’ (pay) it was sending out a clear message that the government has moved to a system whereby patients will increasingly be expected to foot the bill for essential treatment previously available on the NHS.

The list of limited treatments will grow over time and is already hugely undermining of the health service’s founding principles. It must be called out for what it is – privatisation driven by rationing.

This move is a very slippery slope, and it’s clear that patients will suffer. Fully renationalising the NHS is the only real way to save a comprehensive and essential service for us all.

Dr John Puntis is co-chair of Keep Our NHS Public and a retired Consultant Paediatrician.

3 Responses to “Medicine menus: How the NHS is being chipped away by stealth”