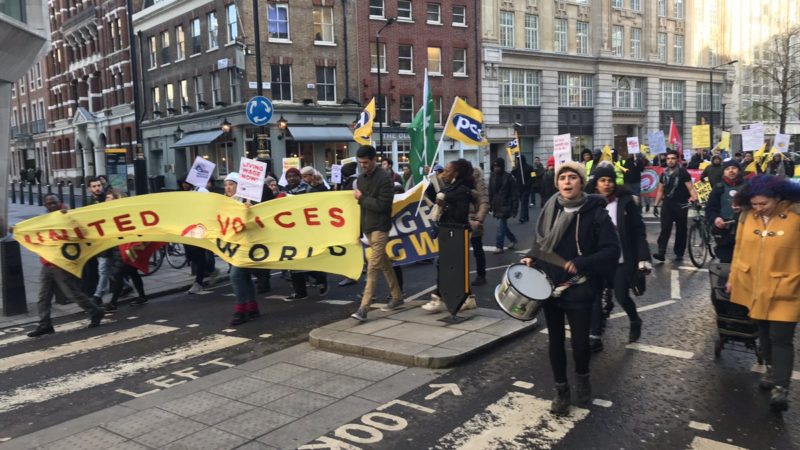 Outsourced caterers and cleaners working at the Department for Business, Energy and Industrial Strategy have started an indefinite strike.

The workers, who are directly employed by the ISS and Aramark agencies, are demanding they are paid the London living wage of £10.55 an hour.

From July 22nd, they will be joined on strike for five days by security guards, porters and postroom staff.

Praising the workers, the leader of the PCS union Mark Serwotka said:

“Contracted out staff in BEIS have led a courageous campaign to win pay justice from unscrupulous and greedy contractors.

“For them to have no other choice but to take indefinite strike action is a testament to their dogged determination to win.

“PCS is supporting them all the way in their fight for the London Living Wage and I call upon the entire trades’ union movement to get behind our members.

“I urge BEIS to take control of this situation, put pressure on the contractors to pay up and ultimately bring all of these staff back in-house.”

In January, Left Foot Forward spoke to BEIS workers about the campaign.

Marline Chambers, who works in catering, and security guard Miguel Lopes were both employed by Aramark on BEIS’s behalf.

Marline, who has two children to look after, was paid the minimum wage of £7.83 while Miguel was paid £8.76 – less than the London living wage.

If they have to attend a hospital appointment, again they said they do not get paid.

Unlike some outsourced workers, they do get paid holiday, the legal minimum of 20 days a year.

However, they say they are not allowed to take these four weeks consecutively, making it harder to spend time with families in other countries. Many of the striking workers are migrants and so have loved-ones abroad.

The 20 days of holiday is also less than the civil servants who also work at the ministry. The campaign is asking for equality in this regard.

Left Foot Forward spoke also to a BEIS barista called Ama Joaquin who said she was there to support her colleagues.

She said that someone she worked with had to have a shoulder operation and was not paid for the time she spent recuperating.

As she needed money, she had to quit the job and claim Job Seekers Allowance and her landlord threatened to evict her.