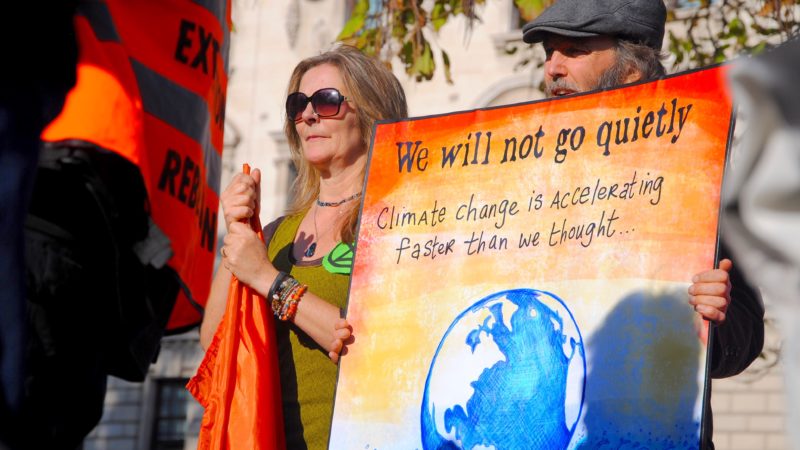 Most visibly, lobby groups Positive Money and Fossil Free London joined forces outside the Bank of England today to protest the bank’s lack of progress towards greener financial services that underwrite sustainability.

Fran Boait, executive director of Positive Money, said that while the Bank of England’s policy committee has embraced climate stress testing, in its latest financial stability report it still seems to be taking a “wait and see” approach to the potential for climate catastrophe.

“The Bank of England cannot further delay in using the tools at its disposal to penalise investments in fossil fuels, consistent with how it treats other financial stability risks such as irresponsible mortgage lending,” Boait said.

“We don’t need the results of stress tests to know that banks continuing to pour billions into fossil fuels increases climate risk.”

The new financial stability report does recognise that the window for transition to a carbon-neutral economy is finite and closing but just does not go far enough, she noted.

“The longer the central bank allows banks to pump money into carbon bubbles, the harder and more disorderly the transition to a green economy will be.”

According to Positive Money, banks have invested $1.9 trillion into new fossil fuel projects globally since the 2015 Paris Agreement, with UK lenders among the worst culprits.

Positive Money says the Bank of England should use all the credit guidance powers at its disposal to stop the financial firms it regulates pouring more money into fossil fuels. It should also stop buying shares in the likes of Shell and BP with money created through quantitative easing, it pointed out.

The Scottish Greens also chimed in on climate and fossil fuels today, condemning an announcement of new North Sea and Shetland oil and gas exploration as “unsustainable and dangerous” when humans might have only 11 years to tackle the climate emergency.

“If we are serious, a transition needs to start right now, not after we’ve extracted every last bit of oil and gas,” according to a party statement.

The UK government committee on climate change has so far been unable to deliver 96% of the policies needed to meet its own 2050 target, according to Extinction Rebellion.

Russell Arnott, an oceanographer at the University of Bath, commented: “Average sea levels have risen by 23cm since 1880 with devastating consequences.

“This is causing destructive erosion, flooding, more frequent hurricanes and powerful storms, killing and displacing millions worldwide. We have to wake up.”

According to Extinction Rebellion, NASA research suggests that 22,300 homes in Bristol alone could be at risk from rising sea levels and flooding by 2050.

Stephen Lingwood, commenting for Extinction Rebellion Cardiff, said: “People are dying right now of climate chaos in places like India. It’s only going to get worse.”

Daniel Armstrong, from Extinction Rebellion Scotland, added: “As the climate continues to break down, more parts of the world will become uninhabitable. Immigration is already seen as a big issue but it will only increase as more people are displaced.”