Fracking has energised and motivated a vast and cross-political resistance movement against it. 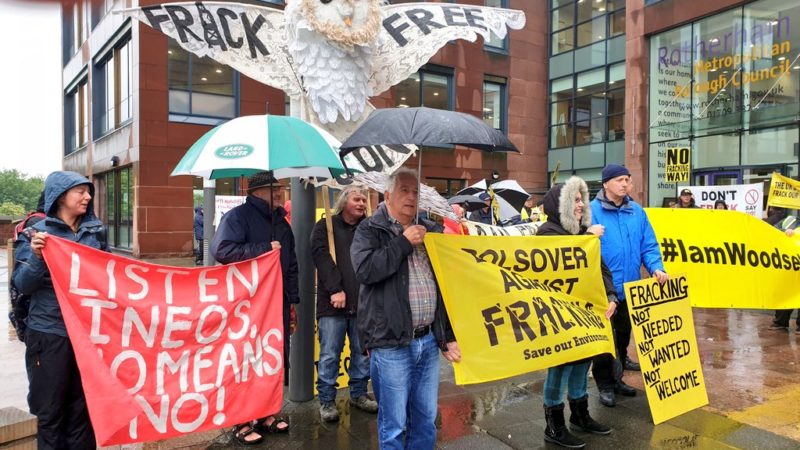 It is striking that the majority of people who are now the anti-fracking stalwarts have never been involved in politics or activism before.

It struck me yesterday morning, outside Rotherham council chambers, just how organised and smoothly coordinated the anti-fracking movement has become.

The wind was howling and the rain blowing horizontally with it, but no one was fazed.

There were a couple of sturdy gazebos to help keep the media dry (out in full force from ITV, BBC and several local independent radio stations), the banners were well weighted and durable, the spectacular Mission Springs owl perfectly balanced, the chanting ready on cue.

Contingents had come at 9am on this weekday morning from right around the North and Midlands, from Frack Free Lancashire to Bolsover Against Fracking to Frack Free Allerton Bywater, as well as the spectacular Mission Owl and the many groups from the area around Woodsetts that is the current national hotspot.

On social media everyone was using the #Iamwoodsetts hashtag, and a little corner of the library dedicated to making videos backing it.

A banner said “Peddling Plastic – Team Ineos”, making the link between the fracking industry and the plastics now choking our world, something on which public concern is at high pitch.

The frackers might not have succeeded in establishing an industry, but they have certainly unintentionally built a committed, resilient, effective movement of people who when distant Westminster finally bows to the pressure to ban this dinosaur fossil industry will be in a great position to move on and up to other issues.

I find myself regularly talking at anti-fracking events to people thinking of running for council and parliament, to groups plotting to get community energy schemes going in their communities, to people determined to build on the new solidarity, even just people connecting to each other, to create positive activities once the frackers have been driven off.

It is striking that the majority of people who are now the anti-fracking stalwarts have never been involved in politics or activism before.

The frackers arrived, and they found that communities and councils could say “no”, loudly and firmly, but that that was far from the final word, indeed had little or no impact. Or that councils could be bullied into a reluctant “yes” by the financial power of the multinationals.

And that got people angry, enlightened, and increasingly skilled in campaigning.

It was that familiar story yesterday, as we gathered for the planning inquiry resulting from Ineos’ appeal against Rotherham Council’s decision to block planned test drilling right on the doorstep of the village of Woodsetts (right beside the sheltered housing).

So familiar that when there were not enough seats or space in the room, and no sound system to get voices to the back, it was wearily pointed out that the same had happened in the last hearing in the same room for the Harthill development, where the frackers also wouldn’t take no for an answer despite ridiculous plans for banksmen to get their lorries through narrow roads.

So familiar that the local community group, Woodsetts Against Fracking, had raised the funds for a full legal team, properly represented alongside the council, and arguing a broader case than the council felt able to.

Most people knew that this hearing would be fought on incredibly narrow planning grounds – in this case on noise and highways.

They knew that if they couldn’t be there right through the long days of the hearing, the indefatigable Ruth Hayward would be updating events blow-by-blow on Drill or Drop.

It was the frackers who seemed uncomfortable, struggling, out of sorts, despite the resources of Ineos, continuing to profit hugely from trashing our planet.

They’d apparently had a panic a couple of weeks before the hearing, and suddenly proposed building a 270m-long, 3-metre high acoustic barrier between their drilling site and the public right of way (and the sheltered housing). Then they suddenly decided that wasn’t necessary.

Their last message on the subject came at 6.15pm on the night before the hearing – not reasonable time for preparation for their opponents.

As the Woodsetts Against Fracking rep pointed out, the proposed acoustic barrier would be a major structure, one that would have significant visual impacts on now unimpeded views across countryside, woodlands and the skyline, and that surely would need specific permission. With the westerly winds, it would need a concrete foundation.  And this in the greenbelt.

The WAF barrister had the right legal language about the “noise-sensitive residents” in the sheltered housing – this was struggle between the residents of a small village and a giant resource company.

I’m often asked what can be done to discourage support for the rightwing demagogues who’ve done such damage to our body politic, the Nigel Farages, Boris Johnsons and Donald Trumps.

My answer is that we need encourage people to understand that politics should be what they do, not have done to them.

The anti-fracking movement has discovered they can do that. And when they finally win, they’ll be moving on, to even bigger, tougher targets. And winning on that too.

An inspiration and a guide for a way towards a truly democratic Britain – that’s the anti-fracking movement that was on display in Rotherham yesterday.

One Response to “Natalie Bennett: The anti-fracking movement is causing seismic waves”