“These tube ads are feeding a narrative that tenants are disposable, and profiteering from property is more important than providing long term homes." 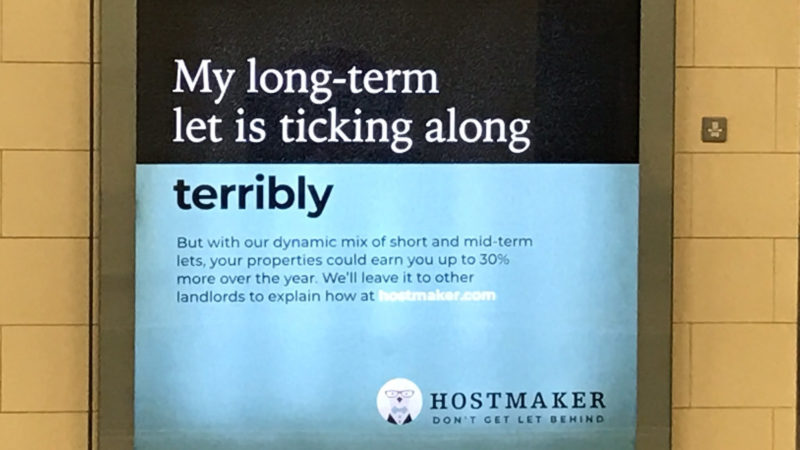 More than 8000 Londoners have called on Mayor Sadiq Khan to ban adverts ‘encouraging’ landlords to ditch tenants for Airbnb-style lettings.

The petition was started by Generation Rent, the national campaign for private renters, after property management company Hostmaker paid for adverts across the Transport for London network suggesting landlords can earn 30% more by switching to holiday lets.

Now a London Assembly member, Labour’s Tom Copley AM, has written to Mayor Sadiq Khan urging him to pull the adverts from TfL, which includes the tube network.

Today I’ve written to @SadiqKhan asking for Hostmaker ads encouraging landlords to switch homes from long-term rentals for Londoners to short-term holiday lets for tourists to be removed from TfL’s estate. A BBC investigation found they’d encouraged landlords to break the law pic.twitter.com/AaC18AYHfq

The Mayor is said to be lobbying the government to introduce a registration scheme for short-lets, in an effort to stem the housing crisis.

Generation Rent supporters will be taking their own advert on to the TFL network on Thursday to protest the adverts.

The campaign has garnered support from other London politicians including Karen Buck MP and the Green Party Assembly member Sian Berry.

The housing charity Shelter estimates around 280,000 people are homeless in England, most commonly because they have lost their privately rented homes.

“These tube ads are feeding a narrative that tenants are disposable, and profiteering from property is more important than providing long term homes. They are encouraging landlords to take homes off the market and turn them into hotels that will be often left empty, contributing nothing to the local community.

“If Sadiq Khan is truly committed to making housing affordable in London then he needs to ban ads like these. Unregulated holiday lets are driving up rents and preventing tenants from making a house a home.”

“Short term lets are spreading across London, pushing up the costs of rent and forcing people out of the communities they’ve always lived in. So these ads are in pretty poor taste….

“The public want politicians to work to fix the housing crisis – not allow companies to run dodgy ads that will make it worse.”

Increasing numbers of landlords are taking properties off the rental market and letting them on short-term let platforms. On Airbnb alone, 17,532 whole homes in London are being advertised for more than 90 days per year, according to InsideAirbnb.com.

In London, landlords must apply for planning permission to let properties as holiday lets for more than 90 days per year. However, a BBC investigation in February 2019 found that several platforms, including Hostmaker, offered to help landlords get around the law.

However, Nakul Sharma, Hostmaker CEO, said the company was not responsible for the housing crisis:

“In a cosmopolitan city like London, there is a need for a range of housing and rental solutions, to meet the needs of the wide variety of residents and visitors in our capital city…

“We manage less than 1,000 homes in London, 0.2 per cent of the 500,000+ inner London private rental market. Our portfolio is made up of premium homes in zone 1&2 postcodes and do not take affordable housing stock away from the market. Many of these homes were sitting empty before they were signed up and we would never encourage landlords to evict tenants. We are not and we cannot take responsibility for the lack of affordable housing in the capital.”

Barcelona has introduced a tourist tax, limited short term lets to just 90 days of the year and lobbied Airbnb to share their data to catch out users trying to cheat the system, while New Orleans is considering whether to ban whole-property short term lets in parts of the city. Amsterdam, Berlin and Venice have also been taking action against a trend many say is exacerbating the housing crisis.

The petition is available here.