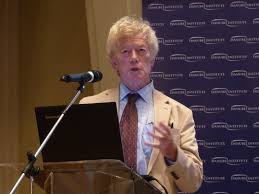 So Roger Scruton has finally been sacked from his role as housing advisor after one racist comment too many.

In an interview with the New Statesman he spoke of a “Soros empire” and warned of “a huge invasion of tribes of Muslims from the Middle East”.

As has been reported though, Scruton’s bigoted views have been known for a long time, long before he was appointed as housing adviser by James Brokenshire.

A search of the Times archives though shows just how long his views have been known for and how influential he has been in the Conservative Party.

As far back as 1975, he set up the a dining and discussion group called the Conservative Philosophers Group”.

A Times article from 1983, headlined ‘who thinks for Mrs Thatcher?’ reveals that the prime minister herself was a regular attendee.

Those who gathered for debate and a three-course dinner were described by the the Times as “right wing philosophers”.

So right wing in fact that, according to the Times, “those on the left of the Conservative Party – not least those in the Cabinet – are beginning to worry lest her intellectual games disinter some of those unpalatable Tory polciies which they had hoped had been long buried and forgotten”.

One regular attendee was Enoch Powell, 15 years after he was sacked from the Tory cabinet because of his racist ‘rivers of blood’ speech.

Another was Julian Amery, a great friend of Thatcher. His brother John was hung for being a recruiter for Adolf Hitler’s Nazi Party and Julian himself argued against the sporting boycott of Apartheid South Africa.

Alongside them were academics and journalists from the Telegraph and The Times. All of the members, except Thatcher, were white men.

The relevance today of this is that Scruton is not some lone eccentric bigot. Him and people like him shaped the modern Conservative Party.

While it’s good that Theresa May has finally accepted that Scruton’s views are “deeply offensive”, we should remember that they are views which were widely shared by the Conservative Party May joined in the 1980s.

These offensive views have filtered down to the current crop of Conservative MPs, many of whom grew up idolising Thatcher and still defend her.

You can see this legacy in many of May’s own actions – from voting against same-sex adoption and equaling the gay and straight ages of consent, to her vans telling migrants to “go home” and her criticism of “citizens of nowhere”.

So, while sacking Scruton is a start, there’s a lot of work to do to get Islamophobia, homophobia and racism out of the Conservative Party.

This article was updated on 17/4/19. It originally stated that Enoch Powell left the Tory party in 1968. In fact, he was sacked from the cabinet in 1968 but remained in the Tory party.