The government backs the arms industry without question, but lets renewables struggle 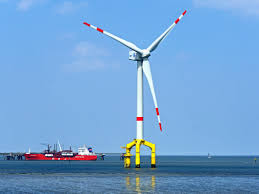 With the backdrop of school student strikes, Extinction Rebellion protests and dire UN warnings, the issue of climate change is further up the news agenda than it’s been for a long time.

Campaigners are calling for solutions and action. It’s easy to see why: of all the areas where there is a huge gulf between government rhetoric and reality, environmental policy is unquestionably among the greatest.

Much of the reporting and framing of climate change suggests that it is something that will happen to us in the future. But it’s not. It’s something that’s happening now.

In the years to come, extreme weather events, flooding and droughts could displace populations and exacerbate conflict over resources. Time is running out, but, with the largest wind resources in Europe and substantial wave and tidal resources, the UK is well placed to act.

Such a change would take the kind of political will and effort that have been in short-supply from Government. It would need a major change and an industrial strategy that puts environmental justice and sustainability at the heart of policy. In short, it would need the emphasis and support that is currently offered to another major area of engineering: the arms trade.

The contrast between the waste and destruction of the arms industry and the huge potential benefits of investing in and building the renewable energy sector is stark.

The former is a major driver of instability and destruction, and the latter could play a central role in building a better and safer world.

The outcomes may be very different, but the production of offshore wind and marine energy technology rely on very similar skills to the arms trade.

However, despite the growing alarm of the climate catastrophe that lies ahead, renewable energy is still an underfunded sector, and one that is in urgent need of government support if its potential is to be realised.

The markets and business alone have never been able to fill the gaps, and nor should they be expected to.

In comparison, arms companies enjoy a huge level of political and financial assistance from the heart of Government.

A recent report by the Stockholm International Peace Research Institute put the cost of subsiding UK arms exports at over £100 million a year.

This is to say nothing of the huge levels of political and logistical support that the arms companies are offered.

As Bob Keen, the head of government relations at BAE Systems, told the House of Commons Defence Committee “it simply is not possible to do a major defence deal without fundamental Government support.”

He’s right. That’s exactly why the arms industry puts so much time and resources into influencing politicians and maximising its voice in the corridors of power.

It may be good for the spreadsheets of Keen and his colleagues, but there are real-life consequences of this support. Many of the weapons being promoted by Government are doing terrible damage around the world.

The UK exports arms to over 100 countries, including many of the most repressive regimes and dictatorships.

The impact is arguably being felt most strongly in Yemen, where Saudi-led forces are using UK-made fighter jets, bombs and missiles for their ongoing bombardment.

Politicians often try to paint the arms industry as an economic powerhouse or a necessary evil that might be morally dubious but is great for jobs.

However, regardless of all the resources it is given and the access it enjoys, the number of jobs in the arms industry is on a long-term decline.

That is why Campaign Against Arms Trade has funded and coordinated studies into alternatives to arms production.

Our research shows that a move towards offshore wind and marine energy could benefit us all by providing greater security from environmental threats and by producing more jobs than the entire arms industry.

With the right investment and support, the Government could help to create over 300,000 jobs in offshore wind and marine energy alone.

These impact of these changes would not just transform industrial policy, they would also lead to a radical, transformative change across the whole of our society.

Unfortunately these priorities are not shared in Downing Street. In 2014, the government spent 30 times more on arms research and development (R&D) than it did on renewable energy R&D.

Without a greater fundamental support from Westminster and Whitehall it will be hard to realise the potential for expanding jobs in renewable energy.

The lack of support isn’t just detrimental from an environmental perspective, it’s also counterproductive for the economy.

The renewables industry is being held back by a major skills shortage. This means that the UK is missing out on large numbers of supply chain jobs.

Thankfully, recent events have moved the debate forward. The wave of actions around the world has drawn attention to the scale of the issue, and helped to drag the political conversation beyond vacuous party-political slogans and on to solutions.

Last year the Trade Union Congress called for the formation of a Shadow Defence Diversification Agency to look at alternatives to arms production jobs. It is a call that could have a major change, and one that is gaining an ever-greater support from opposition parties.

However, if countries like the UK are to play its part in controlling the fallout of climate change then those words need to turn into actions.

There is a climate emergency on the horizon. Big change is needed, and where better to start than by shifting from arms to renewables?

Andrew Smith is a spokesperson for Campaign Against Arms Trade