This could prove to be a powerful coalition. 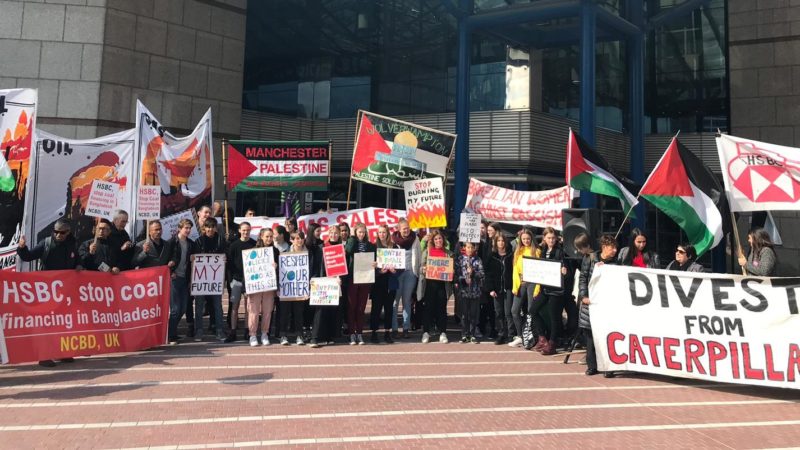 Over 100 people protested at the AGM of HSBC on Friday, over the bank’s alleged ‘complicity in climate change, war and military occupation’.

A newly-empowered coalition is going after major investors in climate change and the arms trade – with Britain’s biggest bank seen as a key target.

In the last three years alone, HSBC has reportedly poured £43bn into fossil fuels, whilst at the same time investing over £830m in arms companies and being involved in syndicated loans to the arms sector exceeding £18.9bn.

But protesters say that HSBC’s policies, lending practices and exposure give cause for an escalation in action and demands.

Research shows that a heating climate has been a contributing factor behind wars in the Middle East – leading protesters to assert that a cycle of war and warming increasingly binds anti-militarism and climate campaigners to the same cause.

The groups highlight that in Nigeria, Syria, Iraq and elsewhere, oil, gas and coal are being extracted under the gaze of state-military and militias.

﻿A spokesperson for the campaign told Left Foot Forward:

“We have vowed to continue campaigning together until HSBC divests fully from the fossil fuel industry and all companies providing military equipment used by Israel and in conflicts across the world.”

“For too long now big banks like HSBC have been pouring billions into climate-wrecking fossil fuels every year. HSBC is one of the biggest fossil fuel financiers, supporting projects that not only damage our climate but also ravage frontline communities across the world.

“HSBC needs to massively step up its climate ambition, concretely that means ending its financial support for all fossil fuels.”

Christian Aid is also backing the campaign, calling for HSBC to:

The protest comes on the day that young climate strikers again take to the streets to draw attention to environmental chaos.