Andrea Leadsom said parents should be able to decide whether children are 'exposed' to LGBT relationships. 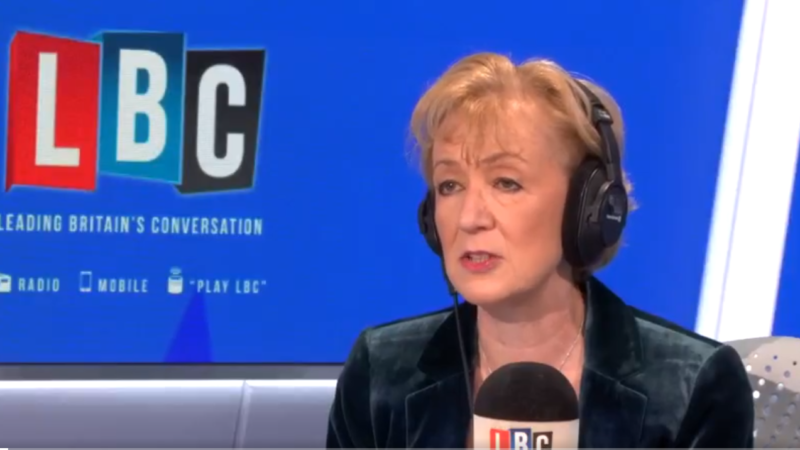 Commons leader Andrea Leadsom has been condemned after saying it was up to parents to decide when their children should be ‘exposed to that information’ in regard to LGBT relationships education.

The frontbencher’s comments were called ‘bigoted’ after the LBC appearance on Wednesday morning.

It follows on from the decision of five schools in Birmingham to refuse to teach Sex and Relationships Education – a move branded homophobic by many campaigners.

Leigh Trust schools and Parkfield Community School have all suspended the ‘No Outsiders’ education programme following protests from some ‘traditional’ parents.

In a heartfelt address at PMQs today, Labour MP Lloyd Russell-Moyle urged the Prime Minister to act and defend LGBT teaching in schools:

Labour MP @lloyd_rm asks the PM to condemn @andrealeadsom for saying that parents should decide when children are exposed to LGBT education.

PM says she will send him the guidance for schools on LGBT education.

One teacher said denying children LGBT education would simply mean their only knowledge of gay issues was through playground taunts:

i am a primary school teacher and kids call eachother gay from a very young age. scrapping LGBT education due to parent pressure isn’t giving parents a say in when children get exposed to things, it’s deciding they should be exposed to these things as playground taunts first https://t.co/HZr4741avi

“I wonder what Andrea Leadsom think’s children should be “exposed” to at school? Coming from the person who doesn’t think you can be a good prime minister if you haven’t had children.

“Inclusive education is already happening in Scotland. The language Andrea has chosen is purposeful. It plays into the “sexualisation” narratives of age appropriate sex and relationship education, rather than the “age appropriate” and “relationship” part.

“It also fails to acknowledge that the majority of children are “exposed” to heterosexuality. That being LGBTIAQ+ is natural and you cannot be “indoctrinated” as part of the “gay agenda”. The impact of the conservatives homophobic Section 28 is still being felt by many in the LGBTIAQ+ community.”

“Andrea Leadsom’s comment comes across as nothing short of bigoted and offensive.

“What she refers to as being “exposed to that information” is in fact children being educated. Which is exactly what our schools are there to do, and are being taught to understand and be respectful of all individuals, families and relationships.

“The Leader of the House should apologise immediately for this unacceptable language.”

“These reports that schools have stopped teaching LGBT rights are incredibly alarming.

“There is not only a moral imperative to ensure that all young children receive LGBT inclusive education, there is a legal requirement too and schools must comply with the Equalities Act. There is no justifiable reason to stop the teaching of these issues.”

“I hope the Commons today will vote for the new guidance on sex and relationships education which will apply to all schools. But it is for the government to ensure that schools are supported and the guidance properly implemented.”

There are fears that moves by schools to stop teaching about LGBT relationships has echoes of Section 28 – the Thatcher-era policy that prevented schools from ‘promoting’ homosexuality.