People are struggling to survive with Universal Credit 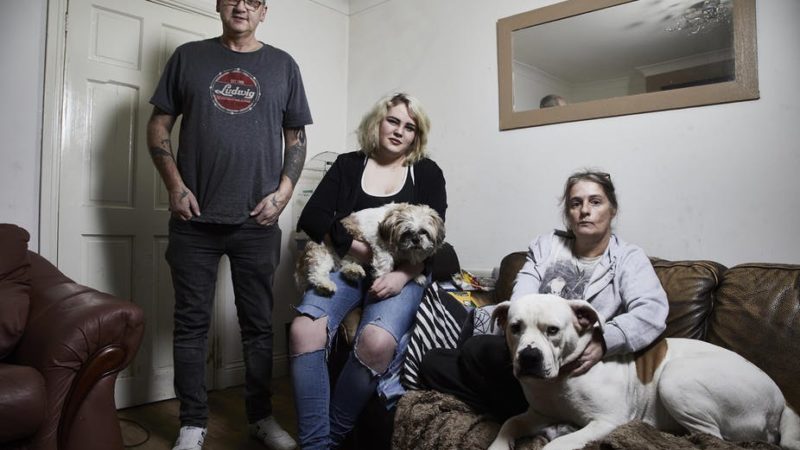 It’s customary to celebrate with cake. We all do it. Even the Department for Work and Pensions (DWP). Job Centre Plus offices across the country have been marking the roll-out of Universal Credit with big slabs of cake.

But, for many people the introduction of Universal Credit, a new social security benefit replacing six previous benefits, is anything but cause for celebration.

The many flaws with the benefit are starkly depicted in Channel 4’s series Skint Britain, which explores just what living on Universal Credit can entail. The show follows people like David, forced to survive on £5 for a month after a benefit sanction, and Tracey who is unable to access support for her serious cancer prognosis. Their stories are mirrored in the wide and growing evidence documenting the hardship caused by Universal Credit, which is associated with rising food bank use and can all-too often trigger increased poverty and even destitution.

Read more: Universal Credit is built around flawed incentives that are doing real damage – fixing it is essential

As the first episode of Skint Britain aired, the DWP’s press office issued a series of tweets, which sought to sell Universal Credit as a positive and necessary step forward.

In one tweet, the DWP emphasised how Universal Credit’s system of monthly payments is designed to reflect the world of work. Claimants are “helped” into the habit of monthly budgeting to better prepare them for the “reality” of life in paid work. However, as researchers have pointed out, while the government says that three out of four employees are paid monthly, this means that one in four is not. While a fixed monthly salary is the common experience of employees in professional and managerial employment, the frequency of wage payments varies for those who work according to hourly rates and varying shift patterns while juggling caring commitments which don’t fit easily into the rigid monthly framework set by Universal Credit.

The DWP’s social media activity also flagged adjustments made to the benefit, such as the removal of the seven day waiting period before a claim can be made.

But claimants still face a minimum wait of five weeks for their first payment. And five weeks can be a very long time to wait when you are living on no income.

While claimants can access a 100% advance during the five-week wait, any advances received must be repaid back over the subsequent year, which will reduce a person’s monthly entitlement and so often push them into further poverty. Only claimants who meet the eligibility criteria can receive advances. On Skint Britain, a DWP telephone advisor informs cancer patient Tracey that she is not eligible to receive an advance, and that she is out of options for monetary support.

Not fit for purpose

Further tweets from the DWP emphasised that benefit sanctions are a “last resort”, and something which existed prior to Universal Credit. In fact, statistical analysis of rates of sanctions shows that Universal Credit has seen far higher frequency of sanctioning than under the six benefits that it replaces. Too often, people are sanctioned for what seem like minor infringements: simple mistakes which then have significant and long-lasting financial repercussions.

There is a jarring disconnect between the reality of life for those in receipt of Universal Credit and the DWP’s efforts to draw a picture of a benefit that is fit for purpose. The newly appointed secretary of state for work and pensions, Amber Rudd, has promised to listen “very carefully” to concerns about Universal Credit. But the DWP’s response to Skint Britain appears to be a tone-deaf defence of the system, which is as dogmatic as it is unpersuasive. The official lines and simplistic presentation parroted in these tweets suggest that Rudd’s promise may amount to little more than political rhetoric.

Sadly, this doesn’t give us much hope for the next stage of Universal Credit’s roll-out, which will move three million more claimants on to the new benefit. This process has been delayed to allow the DWP to “test and learn” from a pilot of 10,000 claimants. But the government fail to recognise the dissonance between the political assumptions on which Universal Credit is built and the reality of claimants’ lives. Paired with the definitive evidence that discredits its flawed approach to reform of the social security system, this makes us fear that very little is likely to change.

Rather than test and learn, the DWP needs to start to listen and learn. Listening to claimants themselves, such as those interviewed for Skint Britain, would be a very good place to start. Then, and only then, might the celebration of Universal Credit’s continued roll-out with cake seem like anything other than a very cruel joke.

This article is republished from The Conversation under a Creative Commons license. Read the original article.

One Response to “Skint Britain: response to series about life on Universal Credit shows government is still not listening”