Ali Milani is aiming to overturn a 5,000 majority 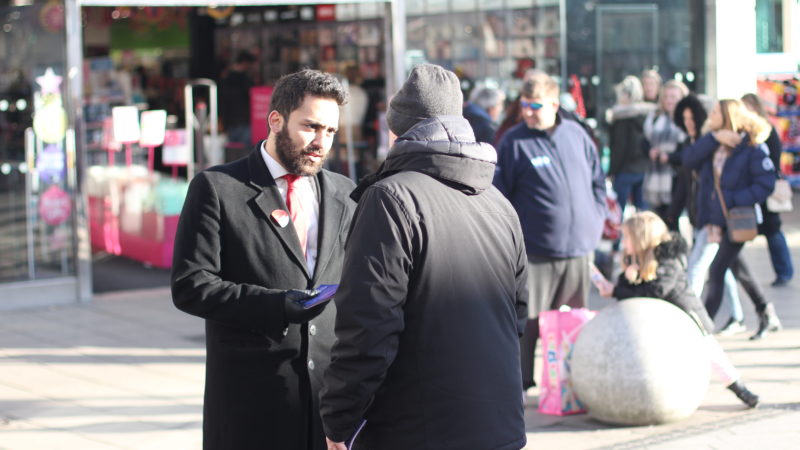 Labour’s candidate for Uxbridge and South Ruislip is everything Boris Johnson isn’t – and he thinks he has a real shot of getting him out of Parliament at the next election.

Ali Milani and his mum moved from Iran to Wembley when he was five years old. While Johnson attended Eton, Milani grew up on a council estate and says he had a “very working-class, relatively poor upbringing”.

Like many people in their twenties, he was introduced to politics first through the protests against the Iraq War (which Johnson voted for) and then again when the Coalition government tripled his tuition fees.

Despite the rise in fees, Milani went to Brunel University, which is about ten miles from where he grew up and in the constituency he is now running for.

Having grown up under New Labour, he regarded himself as too left-wing for the Labour Party. So when he saw that a Labour MP was visiting Brunel, he decided to go along and argue that Labour had strayed from its traditional values.

“As a wise 18 year old, I thought it would be clever to go. I thought the Labour Party wasn’t left-wing enough. I didn’t think it dealt with the concentration of wealth well enough. Following the Iraq War and the Afghanistan War and the backdoor privatisations of the NHS and all this.

So I showed up to this event thinking I was going to ask this Labour MP a bunch of difficult questions and every question the audience asked, this guy knocked it out of the park. His name was John McDonnell and he was absolutely brilliant. I was pleasantly surprised and I thought things were getting better under Ed Miliband so I joined the Labour Party in early 2015.”

A few months later, Labour lost a general election, Miliband stepped down and the leadership election began, with Milani volunteering for Corbyn’s campaign. After that, he first ran for election himself, as a councillor for Heathrow Villages.

“That was a tough election. Just because there was a whole lot of racism and islamophobia in that campaign. There’s a little bit of a UKIP, quite right-wing presence. When a young muslim stands, it can get quite hostile.

To be honest, in every election I’ve stood in there’s always been a little bit of a fight about racism and islamophobia and I’ve always tried to go over it. My view is that when you speak to people, people’s sense usually gets us through.”

Milani won the election though and became the youngest person on Hillingdon Council and was asked if he had considered running for Boris Johnson’s Uxbridge and South Ruislip parliamentary seat.

“My initial response was that I’m probably not going to be taken seriously. Young people rarely get selected in the Labour Party but I was told to just think about it.”

“The first time I really considered it was when Boris Johnson made one of his racist comments. I don’t remember which one, they’re quite frequent. I just thought ‘wouldn’t it be really interesting and somewhat poetic justice if a young muslim immigrant was to take on the flag-bearer of some of the right-wing divisive politics that’s taking over the UK?’

So the reason I chose to stand is that I think there is something deeply interesting and deeply attractive about someone who is an immigrant, who grew up on a council estate, who is a muslim, who is a young person taking on someone who regularly uses and co-opts racist language, someone who is the definition of the elitist establishment and someone who is dividing the country.”

Can he win though? Uxbridge and South Ruislip is essentially a wealthy suburb of London and the seat has been Tory since it was created in 2010.

Perhaps Labour benefitted from demographic changes, with more younger people and more people of colour moving from inner to outer London for cheaper housing. And perhaps Brunel’s students turned out in force.

According to Ali Milani though, Johnson’s popularity is falling because the area is particularly politically savvy. They don’t like HS2, they don’t like Heathrow expansion and they definitely don’t like having an MP who is more interested in posing on the world stage and writing £5,000 Telegraph columns than on representing them in Parliament.

John Randall was the Tory MP before Johnson. Despite me disagreeing with almost every vote he passed, he was a local MP and did a lot of local work. Boris has not ingrained himself in the local community and we hear that on the doorstep all the time. People here have traditions of local representation and local community activism.”

The way I put it on the doorstep is this. If I fall ill, I’m going to the local hospital Hillingdon hospital. If Boris Johnson gets ill, where is he going?

Despite all this though, Milani recognises that Johnson remains the favourite to win the seat, but he thinks maybe even that could work in his advantage. “The British people love a little underdog story and we’re certainly that,” he said.