Companies in attendance supply arms to the Saudi air force 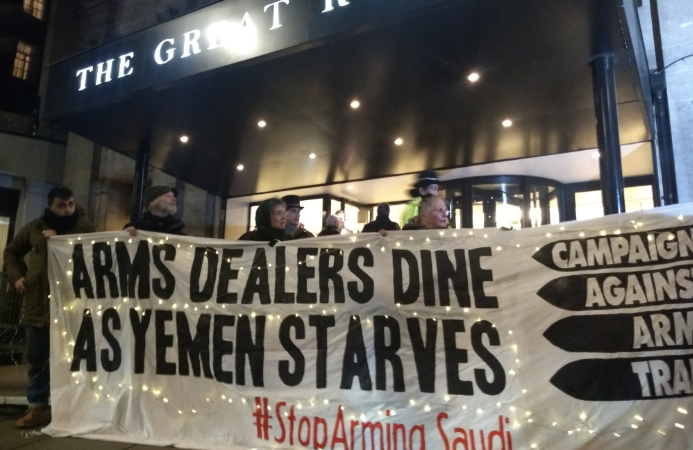 The smartly-dressed diners queued to get into Grosvenor House next to protestors holding banners reading ‘arms dealers dine while Yemen starves’ and chanting ‘blood on your hands’. At one point, the diners stepped over protestors to enter the hotel ballroom.

The dinner is organised by the Aerospace, Defence, Security and Space (ADS) association – the trade body which represents many arms companies.

The dinner was addressed by the Chief Executive of BAE Systems, a UK-based company which provides fighter jets to the Saudi Air Force.

Saudi fighter jets have been used in a bombing campaign on Yemen which has killed at least 10,000 civilians and left millions on the edge of starvation.

The Air Force has also been accused of targetting civilians and food supply an a United Nations report accused the Saudi-led coalition of torturing detainees, raping civilians and using child soldiers.

Despite this, BAE Systems is currently in negotiations to sell another 48 fighter jets to the Royal Saudi Air Force.

When the diners had entered the hotel, protestors outside played a message from Yemeni journalist Ahmad Algohbary on a speaker. He said:

“My country Yemen has been under bombardment by the Saudi coalition for four years. The UK has sold billions of arms to Saudi to destroy our infrastructure, kill thousands of civilians and displace millions of Yemeni people.

Protest organisers Campaign Against Arms Trade were unable to obtain a guestlist for the event but previously dozens of MPs have been invited.

The dinner was addressed by former Home Secretary Alan Johnson.

“Alan Johnson is a respected public figure and should not be speaking at such a grotesque event. He should not be using his reputation to legitimise and enable those that profit from war and conflict.”

Campaign Against Arms Trade currently has a court case challenging the legality of the UK’s decision to grant export licenses to Saudi Arabia despite evidence that the weapons would be used to breach international humanitarian law.